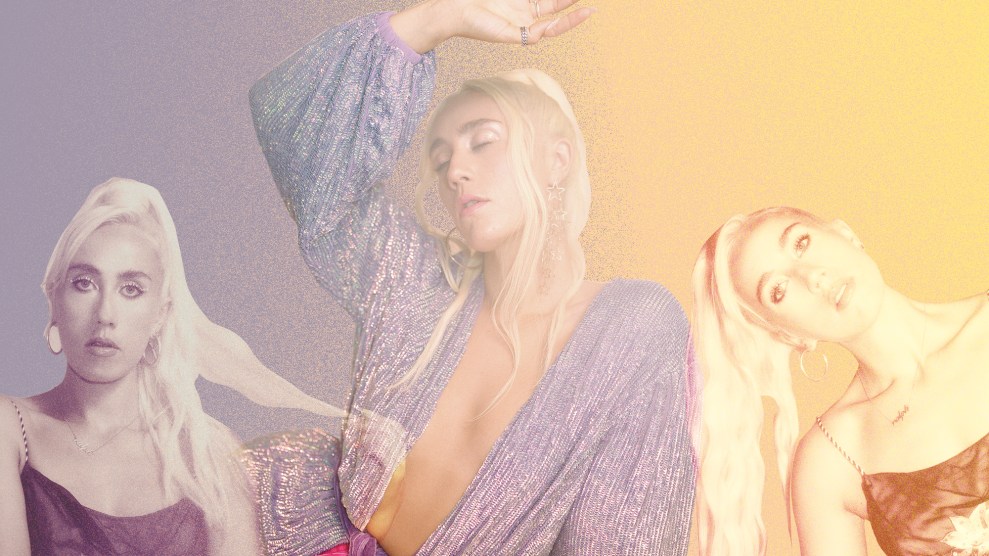 Before she was Ralph the pop artist, Raffaela Weyman was a Toronto teenager bombing an audition for a performing arts school. For her tryout, she’d decided to go with what she felt most comfortable with—musical theater—and sang songs from My Fair Lady and Sweeney Todd. Things went badly. “I was so nervous that I lost control of the nerves in my legs, and I was shaking the entire time,” she recalls. Garbage or not, she managed to squeeze into the freshman class, whereupon she soon found fresh anxieties to confront in the new and scary world of high school. “From grade 9 until grade 11,” she says, “I was terrified.”

One day during high school, she decided to venture just a little outside her comfort zone. “I did a jazz standard and my music teacher was like, ‘Oh, that’s way more your speed,'” she recalls. Ralph hadn’t thought of herself as a jazz singer. But then suddenly that’s what she was. There was an epiphany in this that would later serve her well as she embarked on a career in pop music: Talent doesn’t care about genre.

Twenty-nine years old and a proud Libra, Ralph is part of a new generation of artists who embrace the hybridity of pop. It’s a genre, she says, that allows an artist to become a freer and more creative human being. This puts her somewhat at odds with the perception of pop music as commodified music, with its industry-designed megastars and algorithmically designed Top 40 hits. But as Ralph sees it, the genre is defined by its instability—her presence in the industry is proof of that. “I don’t feel limited at all by the term ‘pop,'” she says. For Ralph, pop is less a static category than an ongoing experiment, a process of trying on new stuff to find works best for her sound and her words.

Her first EP, 2017’s self-titled Ralph, has no shortage of tracks that any streaming service would classify under pop. “Tease” is a synthy dance track; “Something More” is a slower, beat-driven track; “September Fades” is moody and autumnal, full of the classic R&B derived snaps that decorate many of Spotify’s “Discover” playlists. All are detailed by subtle chimes and vocal emphases that place them solidly among the work of peers like Tove Styrke and Troye Sivan. Her most recent release, Flashbacks & Fantasies, is similarly fragmented. There isn’t a single sound that binds all these songs together. Just a single person: Ralph. It’s a collection of mismatched tracks that showcase pop as the creative and freeing genre it can be.

Raffa, as she is known casually, was born and raised in Toronto to a large family of creatives. That offered a sense of relief for her, knowing she wouldn’t be pressured into a more traditional career—a lawyer or something. As Ralph’s interest in the musical arts began to form, so did the self-doubt. “It took me a long time to feel comfortable singing and being like, I can do this. I have the skills,” she says.

Ralph transitioned away from studying musical theater and found herself drawn to jazz, folk, soul, and funk—genres that she felt allowed her to access “more emotional sentiment”—which she later explored in Toronto’s vibrant music scene.

While Ralph still is active in that world (“these are my friends” she says), the music she makes today is not of that scene. She isn’t shy about who she is (a pop musician) and what she does now (make pop music).

What defines a pop star today, is an evolving notion. The music itself has changed. Songs are shorter. They’re often unbalanced, frontloaded with the stuff that grabs our ears, keeping listeners on the hook for at least 30 seconds so that—allegedly—the royalties can kick in (even though those royalties are abysmal). But maybe the most significant disruption has been to the classic rigidities of a business built on radio play and record sales. Streaming services—namely Spotify and Apple Music—and their prioritization of curated playlists have relaxed old notions of genre. The ability to “make it” now doesn’t wholly rely on getting radio play. Artists now make music in hopes of landing a coveted spot on these playlists, which tend not to observe traditional genre boundaries. Apple Music’s “Alt Pop” playlist offers an updated eclectic mix of music each week that has no organizing principle beyond keeping “it both innovative and impossibly catchy.” Spotify’s playlist “Lorem” is a collection of “music that breaks the rules, just a little bit.”

In such an environment, pop artists are encouraged to experiment rather than mold themselves exclusively in the image of some sellable archetype. That day she bombed her audition, Ralph was unknowingly preparing herself for the pop music industry of the streaming era. She doesn’t have to “live in this world that’s really cookie-cutter,” as she puts it.

“You really have to ask yourself, ‘What am I doing? What am I offering that makes me special?'”

The freedoms created by such a system can bring their own set of anxieties. “It’s hard because every day there’s a new artist who’s amazing and has so much to offer—and you really have to ask yourself, ‘What am I doing? What am I offering that makes me special?'” Ralph says. What she can offer, she suggests, is an authentic self. “People ask me, ‘What’s the difference between Ralph and Raffa?'” she says. “There isn’t a huge difference. I’m not putting on a facade.”

Stardom for a musician doesn’t have to mean over-the-top admiration anymore. Ralph knows her listeners come back for the lyrical specificity. “Cereal,” a collaboration with the Canadian female electro-pop duo Milk & Bone, is a good example. Taking the point of view of the heartbreaker, Ralph targets the complexity of ending a relationship, delivering an intimate track about universal emotions: regret, curiosity, and loss.

“I have a lot to say about [the world around me], and I think that people listen to the words and feel there’s honesty there,” Ralph says. Honesty can be hard to come by in a pop song written by four or five people. Those hits are still hits for a reason—they’re good songs. But they land like foregone conclusions, plasticky and pre-packaged (“Señorita,” anyone?). 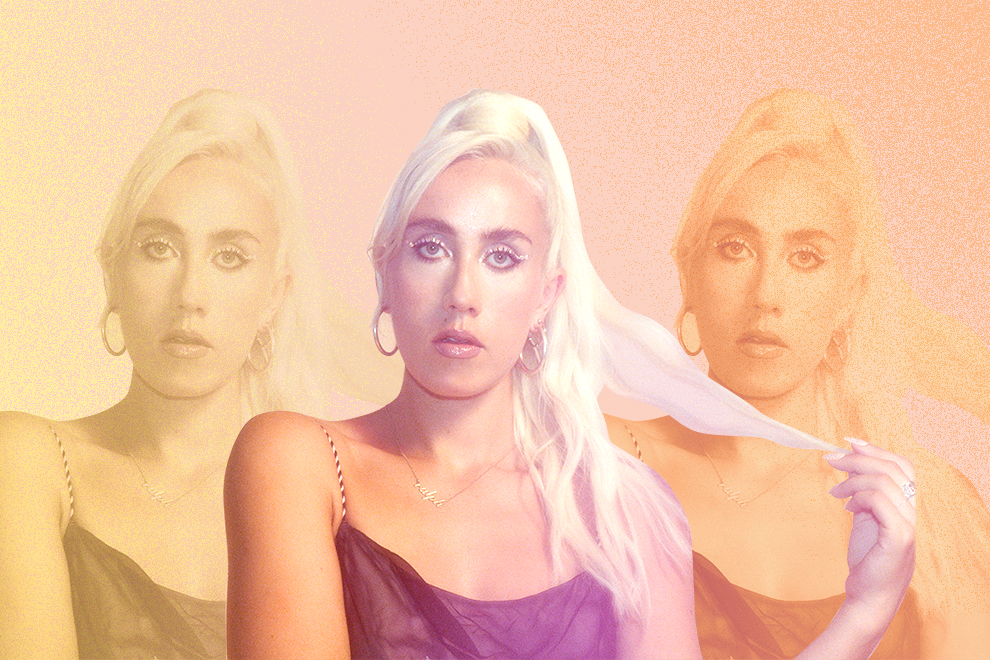 Ralph’s new EP, Flashbacks & Fantasies, commands your attention because of its disjointedness—you can tell it was built in a spirit of play and experimentation. Flashbacks is a stream-of-consciousness affair, as if to mimic the many thoughts that zip through our heads each day. And like those thoughts running through our brains, some stick out a little more than others. In this case, it’s Ralph’s disco-dance track “Gravity.”

With this song, Ralph wanted a challenge. She’d done a lot of the classic pop stuff—synthy, beat-driven stuff—but had never really done a dance track like this. After hearing Dua Lipa and Calvin Harris’s “One Kiss” everywhere, she felt inspired. Recording “Gravity” with a higher beat-per-minute count than she’d ever done before, she tapped into a current and trendy disco sound to offer one hell of a dance track. “I went in to the session for ‘Gravity,’ and I’d been listening to ‘One Kiss’ a lot,” she explains. “And I was like: ‘This is song is so fucking good, it’s killing it internationally in the charts. Why is this song so successful?’ So I kind of unpacked it in this mathematical way.” Ralph begins dissecting the underlying house/piano rhythm in the track to me, talking about how the energy bends with the beats per minute. “[‘One Kiss’] has got this underlying, sort of house rhythm that doesn’t go away—it literally is there the entire song,” she says. “The energy doesn’t change and the concept is overly complicated.” An unchanged concept that isn’t overly complicated—sounds like a lot of mainstream Top 40. But for Ralph, the song unlocked something, inspiring her to make a track that’s intimate but still has its place in the club. “It’s important to evolve and challenge yourself as an artist—that’s how ‘Gravity’ came to be.”

Ralph is still figuring out her place in the industry. “The music industry particularly—and I’m sure in many other industries but I can only speak to this industry—is still such a boys club,” she says. “But I like the idea… that pop music is a girls club.”

She just enjoyed a stint opening for fellow pop star Carly Rae Jepsen across Canada. Within the last year she has begun headlining shows in venues where she only opened before. “Finally doing a headline show at the Mod Club, and actually being able to fill it, I can actually see that,” she says. For all of pop’s evolution in the age of streaming, that part of the job hasn’t changed. “The algorithms don’t really mean anything until you actually see that people are showing up.”