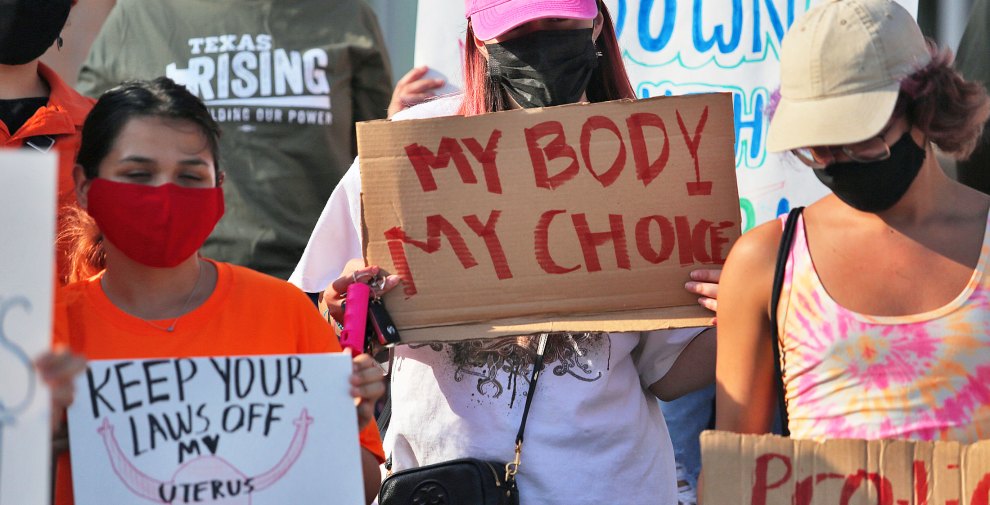 Just two days after a conservative Supreme Court majority allowed the most restrictive law banning abortions to go into effect, a Texas county judge on Friday temporarily halted an anti-abortion group’s attempt to sue workers and providers at Planned Parenthood clinics for providing services. Even so, the brief reprieve for pro-abortion supporters will not stop the onslaught of copycat laws Republican state lawmakers are considering in the coming year.

The Washington Post reported on Friday that GOP officials “in at least seven states, including Arkansas, Florida, South Carolina, and South Dakota, have suggested they may review or amend their states’ laws to mirror Texas’s legislation.” The blatant efforts from state Republicans to replicate the Texas law—which prohibits all abortions after six weeks including in cases of rape or incest—would effectively open up a terrifying landscape for women seeking abortions in a nation where they still hold the constitutional right to have one under Roe v. Wade. That restrictive reality isn’t entirely new in some states. As my colleague Becca Andrews recently noted, a post-Roe world has already put a strain on many southern providers.

“This is uncharted ground,” says Robin Marty, director of operations at the West Alabama Women’s Center and author of the Handbook for a Post-Roe America. Now, the clinic is preparing for an influx of patients from eastern Texas and from Louisiana, where clinics have experienced interrupted services due to the hurricane. Marty tells Mother Jones that at least two of the three clinics in Louisiana are not open this week. “That’s how it is right now. We in Alabama are getting Louisiana patients calling currently and that’s before we have to deal with the overflow of Texas patients.”

But clinics in nearby states aren’t just shoring up to withstand more strain on an already strained system at the intake level. They are also wrestling with a reality in which physicians who provide abortion care are targeted and criminalized for their work.

Last week, the Supreme Court refused to rule on the constitutionality of the Texas law, which allows private citizens to sue providers who offer abortion services after six weeks of pregnancy and others who may assist a pregnant woman in receiving such services. In a dissent, Justice Sonia Sotomayor called the Court’s decision “stunning” and the Texas restrictions a “flagrantly unconstitutional law engineered to prohibit women from exercising their constitutional rights and evade judicial scrutiny.” The temporary restraining order against Texas Right to Life lasts until September 17. But the decision sets up a prolonged legal battle that will reveal how enforcement of the Texas law will work.

“The Court finds that SB 8 creates a probable, irreparable, and imminent injury in the interim for which plaintiffs and their physicians, staff, and patients throughout Texas have no adequate remedy at law if plaintiffs, their physicians, and staff are subjected to private enforcement lawsuits against them under SB 8,” Travis County Judge Maya Guerra Gamble wrote on Friday.

Meanwhile, on the Sunday talk shows, congressional lawmakers on both sides of the aisle set up starkly different interpretations on how the aftermath of the Supreme Court’s decision will play out. First up, US Rep. Veronica Escobar, a Democrat from Texas, warned that the law could result in “awful consequences.” Neighbors are now incentivized to be “bounty hunters” while the restrictions make it “deadlier, more dangerous” for women seeking abortions.

“Texas is now a very dangerous place for women and children,” @RepEscobar says. “We're going to see more states basically import this law and do everything possible to create the most hostile conditions for women in our country.” pic.twitter.com/CDd345zW1x

On ABC’s This Week, Republican Sen. Bill Cassidy of Louisiana, where the Supreme Court just last year struck down a restrictive state abortion law, dismissed what he called the Democrats’ fixation on the Texas law as a distraction to “gin up their base.”

“If it is as terrible as people say it is, it’ll be destroyed by the Supreme Court,” Cassidy said, “but to act like this is an assault upon Roe v. Wade is again something that the President’s doing I think to distract from his other issues.” For instance, he says, Biden’s approach to Afghanistan.

“If it is as terrible as people say it is, it will be destroyed by the Supreme Court,” GOP @SenBillCassidy tells @GStephanopoulos about the new Texas abortion law. https://t.co/PdXq8zVVKi pic.twitter.com/QbKFc2Bjsx

On CNN’s State of the Union, Sen. Amy Klobuchar blasted the Supreme Court for its decision on the Texas law, noting the justices “basically greenlighted a law that is blatantly against Roe v. Wade.” She saw the moment as yet another reason to abolish the filibuster, this time to support a House bill that would make the constitutional right to have an abortion the law of the land.

Sen. Amy Klobuchar says the Senate should abolish the filibuster in order to codify abortion rights after the Supreme Court allowed Texas’ restrictive anti-abortion law to stand: “Now and over the next years, we just will get nowhere if we keep this filibuster in place.” pic.twitter.com/6i7DR5OwWz