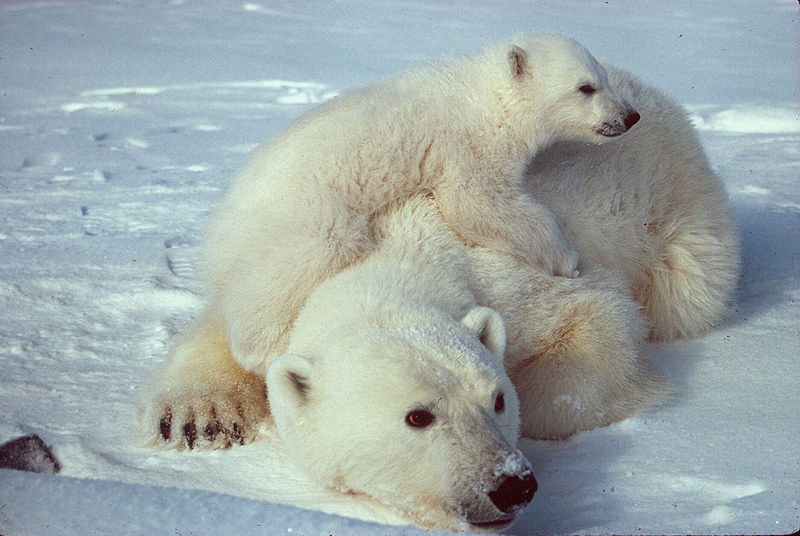 A different kind of ice is replacing ancient Arctic ice. The new stuff is qualitatively different. It’s thinner, darker, wetter. Worse, it may already be changing the local weather and the ability to grow new ice. It could even alter the oceanic circulation that mediates global climate, reports Nature. Oh, it’s bad for polar bears too.

Until recently, the Arctic maintained a lot of multiyear sea ice that takes years to grow and thicken and survives from one year to the next. Some melts each summer. But only in small areas. Too small for the wind to work up big waves. The new ice growing in these calm ponds forms unbroken sheets known as nilas ice.

But the multiyear ice is now melting so fast that vast areas are opening up. Big enough for big weather to set up waves. And these waves chop up the new ice as fast as it tries to form. Ice crystals tossed around in these conditions combine to form a slushy mixture called grease ice. After that, it sets into thin round pancakes of ice three to six feet in diameter.

Why is that worrying?

Jeremy Wilkinson of the Scottish Association for Marine Science in the UK says: “This whole cycle is not in models of the Arctic or the Antarctic. It’s one of these conundrums that people haven’t looked into.” Young ice isn’t that well studied because there used not to be much of it around. Now it’s proliferating like an invasive species.

Wilkinson and colleagues just completed a series of lab experiments measuring the difference between nilas and pancake ice. They found that pancake ice actually forms faster than nilas ice. But this faster formation extracts fresh water from the ocean faster, leaving the seas saltier, which is likely to have an impact on ocean circulation, ice growth, and air temperature. The big stuff.

BTW, although the extent of the sea ice was greater in 2008 than during the record low of 2007, the additional ice was all young ice. Multiyear ice actually declined below 2007 levels.

Add to this the recent news that climate change and accompanying ice loss is now the single biggest threat to the survival of polar bears—stir in a dram of Canadian insanity in the form of an “extreme” polar bear hunt, whereby rich dudes throw down $35,000 for Inuit guides who save their asses from getting lost, sled dogs who haul their lardasses across the miles, and heated tents that keep their precious asses frost free—well, what can I say… How many of these manly men are getting fat bonuses from AIG, I wonder?