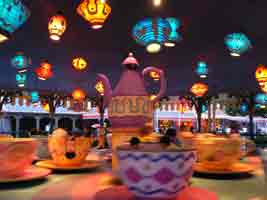 Tomorrow, Tea Partiers in North Texas plan to celebrate the first anniversary of their anti-government movement with an anti-taxes-for-social-programs rally in front of the Dallas city hall. The scheduled speakers of the event are—surprise!—young-ish people of color. Which is likely a calculated move to counter statistics that suggest this fringe conservative movement is primarily comprised of middle-aged white rural males. To further prove the group’s diversity, the Dallas Tea Party (DTP) released a short ad made in the same vein as the Demon Sheep trailer—only (sadly) without the Demon Sheep—attacking MSNBC’s Keith Olbermann, who recently reported on the movement’s monoculture. In the ad, Olbermann asks, “Surely there must be blacks who think they are being bled by taxation? Surely there must be Hispanics who think we should have let the auto industry fail?” His queries are spliced with rebuttals (“Here we are!”) from black and Latino DTP members. DTP leader Katrina Pierson makes several appearances in the ad and was also featured on Fox Business Channel this week. After receiving praise from the Fox host for being a Latina from a single-parent home and for going to college without government assistance (totally false), Pierson made the usual conservative resources-over-government-handouts statement:

I’m a firm believer that all it takes is one positive adult influence in a child’s life to make that difference. If no one had ever told me I could go to college, I probably never would. But that’s the kind of thing that Americans need. They need tools and resources and encouragement. Not handouts or welfare or the redistribution of wealth.

Pierson never goes into detail on what type of resources (or social safety-net programs?) are needed to help Americans during the Great Recession, or where these resources should come from. Regardless, it’s pretty unlikely that more minorities will join a movement that opposes a public health option, stimulus aid, and Good Taxes—like the ones that enabled people like Pierson to attend a government-funded community college.