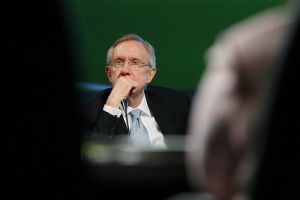 Photo from the Center for American Progress Action Fund, <a href="http://www.flickr.com/photos/americanprogressaction/3821293202/">via Flickr</a>.

On March 1, California radio talk show host Mark Williams, author of “Taking Back America: One Tea Party at a Time” and chairman of the Tea Party Express, posted a video of a new ad on his blog promoting the third upcoming Tea Party Express bus tour. The tour kicks off March 27 in Searchlight, Nevada, the hometown of Senate Majority Leader Harry Reid and will travel the country promoting conservative politics before finishing up in DC on tax day. The ad touted the all-star lineup for the “Showdown in Searchlight,” where the voice-over invited viewers to “help us kick Harry out of the Senate and send him back to Searchlight.” Among those featured in the ad were Sarah Palin, Libertarian Party presidential candidate Wayne Allen Root, Williams himself, Joe the Plumber, “Saturday Night Live” star Victoria Jackson, and former House Speaker Dick Armey.

Armey, now the chairman of the libertarian-leaning FreedomWorks, has been closely affiliated with the Tea Party movement, so in many ways, his appearance in the ad didn’t seem out of the ordinary. But when word got out that Armey would be linking arms with TPE, it set off some grumbling among grassroots Tea Party activists. Despite the name, Tea Party Express is an offshoot of a political action committee called Our Country Deserves Better that was founded by the California GOP political consulting firm Russo Marsh in 2008 to oppose Barack Obama. After the election, it ran ads supporting Palin for her service to the country. The PAC has raised hundreds of thousands of dollars during the two previous Tea Party Express tours, and purists in the Tea Party movement have taken issue with its lavish spending and accused its leaders of working for the GOP to co-opt the movement.

“If I were looking for a grassroots organization to join, I’d hitch my wagon to somebody else,” says Robin Stublen, head of the Punta Gorda, Florida Tea Party and TPE’s most vociferous critic. (Stublen is also working with FreedomWorks to help organize a protest against the health care bill next week.)

As it turns out, though, Armey won’t be going to Searchlight to help bash his former congressional colleague. Levi Russell, a spokesman for Tea Party Express says, “We had been optimistic about getting him, but unfortunately he wasn’t able to make it. He had some family obligations around that time, but he did say he was sorry he couldn’t be there.” As consolation for the absence of Armey, Russell notes that TPE has just confirmed conservative media icon Andrew Breitbart and Hannah Giles, star of the famous undercover ACORN videos, for the Searchlight lineup. He says most of the Republican Senate candidates running against Reid are also likely to be on hand.

And lest any Tea Party types think that Armey backed out of the Searchlight event because of the controversy over TPE’s GOP ties, Adam Brandon, a FreedomWorks spokesman, says that his group did try to schedule Armey for the event but that Armey had family obligations that made it impossible. He notes that the event is the day before Palm Sunday and that “Mrs. Armey” put her foot down. “There’s only a handful of people we would categorically not work with–Dale Robertson, maybe,” Brandon says. While he recognizes that there are people in the tea party movement who would like to “destroy Tea Party Express,” FreedomWorks will not be getting involved in that fight. “I actually think the bus is a really cool thing,” he says.