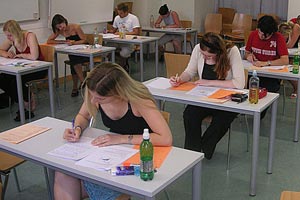 In late March, when Florida first-grade teacher Julie Mark first heard about a new bill that would make teachers’ raises dependent on students’ test scores in her state, she thought the bill’s proposal sounded so outrageous that it didn’t stand a chance at becoming law. “When I have a struggling student, my first thought is, ‘What can I do to help this little boy or girl?'” says Mark, “not: ‘What can I do to make sure this student is not the one who costs me my salary or my job?'”

But in a matter of weeks, a bill that seemed at first like an outlandish possibility was sitting on Florida Gov. Charlie Crist’s desk awaiting his signature. Senate Bill 6 would have dramatically changed the methods used to evaluate public school teachers in the Sunshine State by linking their qualifications for recertification and pay increases to students’ standardized test scores. Those who failed to raise their students’ scores four out of every five years could have lost their license to teach in Florida, effectively ending their careers as educators. Years of experience in the classroom, advanced degrees and professional credentials would no longer have influenced a teacher’s job security and salary more than their students’ ability to improve their performance on standardized tests each year.

In April, after weeks of debate pitting Florida’s teachers’ union against the Republican legislators who supported SB 6, Crist broke from his party and vetoed the bill. But in the month and a half since Crist’s veto, two additional states have proposed changes to state law that would link teacher evaluations to standardized test scores, and Colorado has made a similar bill law. New York‘s bill proposes using student improvement on state exams to determine 20 percent of a teacher’s overall evaluation. New Jersey hopes to create a statewide student data system and use it to track students’ performance on exams every quarter. Colorado’s new law calls for using “value added metrics”—a measure of student test-score improvement year to year—to account for as much as 50 percent of a teacher’s evaluation. Teachers whose students aren’t up to snuff for two consecutive years will go on probation and lose their right to a hearing before being fired.

Why the sudden flurry of interest in changing state education policies? These four states are among a pool of nearly 40 vying for a slice of the $3.4 billion President Obama and Education Secretary Arne Duncan will distribute in September to the second-round winners of Race to the Top, a competition designed to encourage and reward ambitious education reform at the state and local level. (They doled out a total of $600 million to winners Tennessee and Delaware in late March as part of the competition’s first round.) To get some of the money—which states need desperately to fill gaping holes in their education budgets and save hundreds of thousands of teachers from scheduled layoffs—applicants must play by Duncan’s rules.  These rules include adopting policies that favor charter-school growth, closing failing schools, and linking teacher evaluations to student test-score gains, even though there is little evidence that these strategies will work for the country’s struggling schools.

Colorado high-school social-studies teacher Denise Jerome-Curtin told me about one student she calls her “pride and joy,” a teen who worked hard in class holding down a night job at a UPS distribution facility to help support his family. But when UPS slashed its staff and laid him off, he dropped out of school and racked up three felony convictions. He eventually graduated and joined the military, but only after Jerome-Curtin coaxed him back to school as a 17-year-old sophomore and helped him graduate. “Should I be evaluated on that work or on a 65-minute test?” Jerome-Curtin asked.

Colorado’s 2006 teacher of the year, Adele Bravo, points out that students’ home lives can affect their performance in school dramatically. “A couple of years ago, I was quite surprised to learn I had three families who were illiterate,” says Bravo, who teaches second grade. “I love my parents, and they are doing the best they can, but I have to remember that I can’t expect these parents to read to their children.” Bravo made special accommodations for her students with illiterate families and sent those students off with homework they could do independently, or with stories they could read to their families. But that type of effort cannot be quantified properly with a standardized test.

Bob Schaeffer serves as the public education director of the National Center for Fair and Open Testing, an organization that opposes high-stakes standardized exams and advocates other forms of teacher accountability, like students’ performance in a course throughout the school year. As more bills linking teacher evaluations to student test scores become law, the results will be as damaging for students as they are unfair to teachers, Schaeffer says. Some of the many excellent teachers who consider test scores a poor measure of their performance could even leave the profession. Schaeffer says evaluating teachers based on student test-score improvement will harm teachers and students because he spends time each day trawling for the latest research on testing. So far, no definitive peer-reviewed study proves that students’ test scores are an equitable measure of teacher performance, he says.

There is, however, a mountain of research showing that they don’t work. A 2003 study by the RAND Corporation found that evaluating teachers based on students’ year-to-year test-score improvements yields unreliable results. A 2009 study (PDF) by UC-Berkeley public policy professor Jesse Rothstein found a correlation between North Carolina elementary school students’ fifth-grade classroom assignments and their fourth-grade standardized-test performance. To fairly evaluate teachers using student test scores, principals would need to assign students to classrooms randomly, but Rothstein’s findings confirm what most teachers already know—classroom lists are generated using students’ reading and math proficiency, their disciplinary records, and their parents’ requests for specific teachers, among other factors. Teachers who instruct classes full of gifted students have a better chance at posting test-score gains than their counterparts who work with remedial learners. In his study’s conclusion, Rothstein warns that tying teacher evaluations to student testing “will reward or punish teachers who do not deserve it and fail to reward or punish teachers who do.”

Plans to use student test scores to evaluate teachers are still pending in New York and New Jersey. Meanwhile, Colorado Gov. Bill Ritter has insisted that his state’s new law “is not a punitive measure, but a way to lift teachers up to a place of effectiveness.” And although Colorado’s chapter of the American Federation of Teachers ended up endorsing the bill in its 11th hour, the National Education Association, the country’s largest teachers’ union, remains opposed. Florida’s plans to dramatically alter teacher evaluation died with Crist’s veto, but bill author and state Sen. John Thrasher (who is also the state GOP’s chair) believes nevertheless that Florida will fully implement his proposals one day.

Julie Mark worries that Thrasher’s interests to evaluate teachers with student test scores might ultimately prevail, and if they do, she might find herself out of a job. She told me about one student who has severe ADHD, but whose family cannot always afford the medication that helps keep her calm and focused in class. “She couldn’t sit still for more than a few minutes, and she was hypersensitive. Getting her through a day without a breakdown was a success,” Mark says. “Having her sit for a standardized test would have been nearly impossible.”