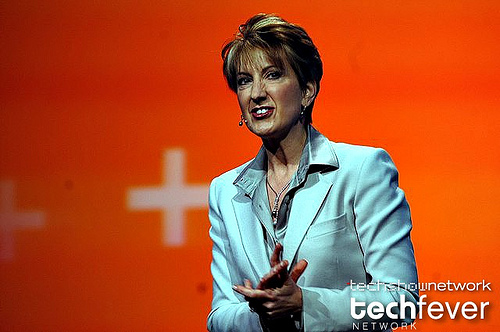 Carly Fiorina, a GOP candidate for US Senate in California. Flickr/TechShowNetwork

The Associated Press reports today on Sen. Russ Feingold (D-Wisc.), yet another incumbent candidate once thought a shoo-in but who is now facing a tough reelection bid in November. The liberal, anti-war Feingold will likely square off against businessman Ron Johnson, the presumed GOP candidate, in what’s shaping up to be a brutal midterm election for the Democrats. On the whole, the AP’s take on the brewing battle up in Wisconsin—according to several polls, Feingold, a four-term senator, leads Johnson by a mere one or two percentage points—is standard stuff.

What’s most intriguing about Wisconsin’s Senate race—and what the AP fails to dig into—is Johnson’s background and wealth. Johnson made his fortune through his company making plastic packaging materials, and it’s becoming clear he plans to use that wealth to defeat Feingold. The GOPer has already spent $1 million on ads, and could spend up to $15 million to beat Feingold. If he does, Johnson will join a veritable bloc of candidates in battleground states like Florida and California who’ve staked out a paradoxical, almost hypocritical position in the midterm elections: the super wealthy who claim to be political insurgents and who, in some cases, ally with the influential tea party masses. They’re candidates who somehow think voters won’t notice or care that they’re spending millions this election season, cutting ads and jetting around their states, while claiming to relate to and connect with normal Americans at a time of record unemployment and economic hardship in the US.

This camp includes, most notably, people like Carly Fiorina, the GOP challenger to longtime California senator Barbara Boxer. Fiorina has cozied up with the tea party, and cast herself as an anti-elitist outsider that’ll bring a fresh perspective to cash-drenched Washington politics. Her campaign slogan—”Had enough?”—and she claims that government is “out of touch” and “arrogant.” Yet this is the same Fiorina who took criticism for her ample use of the corporate jet at Hewlett Packard, where she was CEO before her ouster in 2005. She sniped Boxer for the senator’s hairdo in an off-mic moment caught by a TV crew. And as a candidate, Fiorina has shown little hesitation splashing lots of her own cash to boost her electoral chances, including $3 million in a single month this spring.

Then there’s Democratic candidate Jeff Greene, running for US Senate in Florida. Greene also sees himself as an outsider, an insurgent—but one who also happened to profit handsomely from betting against the housing market and essentially predicting the foreclosure crisis. A former Beverly Hills resident, Greene, whose million-dollar wedding three years ago featured Mike Tyson as the best man, has spent $4 million on advertising inside and outside of Florida. That spending has propelled Greene from an unknown who’s only lived in the Sunshine State for a handful of years to a Democratic frontrunner neck-and-neck with his party’s other candidate, Rep. Kendrick Meek (D-Fla.). But despite his private jet and Florida mansion, Greene is selling himself on the promise that he’ll take on the entrenched ways of Washington; as his website blodly states, “I am the only candidate running for Senate who is an outsider, independent from the political system and not tied to career politicians and Washington insiders and the way they think.”

All of these deep-pocketed “insurgents” and “outsiders” share a common refrain: that job creation is at the center of their campaign platforms. (One of Greene’s slogans, for instance, is “Jeff Greene: Jobs, Results, Florida.”) That refrain will no doubt resonate with voters in an election where jobs and the economy’s health are top of their priority list.

But Fiorina, Greene, Johnson, et al will also have to reconcile that smart jobs message and their recognition of the US’ economic plight with their own profligate spending as candidates. It looks awfully hypocritical when a candidate spends $3 million in a single month on her campaign while at the same time claiming to be someone who will repudiate the money-driven culture of Washington, a city where lobbying and influence are everything. It’ll be fascinating to see whether voters ignore that contradiction when they hit the polls in November, or see through the faux-populism.