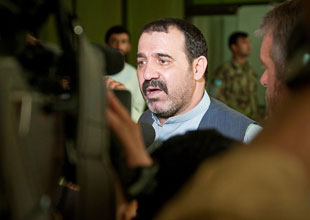 Ahmed Wali Karzai, the younger half-brother of Afghan President Hamid Karzai, has long insisted that he’s no drug kingpin. And now, should anyone question the legitimacy of his Kandahar fiefdom, he has a letter from the Drug Enforcement Agency to prove it. Sort of.

AWK, as he’s known locally, first touted the letter in an interview with a British newspaper, the Independent, published earlier this week: “It has taken years to get this, but here it is, and it shows that these accusations against me are false, baseless.” He said the document states that he is not the target of any drug investigations, claiming the letter will be unveiled sometime soon at a press conference convened by his brother, the president. When the note is made public, he said, it’s his hope that all the press coverage portraying him as some cross between Pablo Escobar and Don Corleone will cease.

Law enforcement bodies don’t typically inform people whether or not they’re under investigation. But the Drug Enforcement Agency (DEA) confirms there is, in fact, a letter—only the agency and Ahmed Wali Karzai have vastly different interpretations of its significance.

In July, a DEA spokeswoman says, the agency’s Office of Records responded to an information request from a lawyer representing Karzai. “This response stated that a search of DEA documents revealed no file that identified Mr. Karzai as the subject of an investigation conducted by DEA,” she says. “This correspondence should not be construed as confirmation or denial of any ongoing investigation, simply that an administrative search did not identify Mr. Karzai as the target of an investigation. It is DEA’s policy not to confirm or deny any ongoing investigations.”

In terms of clearing up any of the allegations surrounding him, this response would seem to leave Ahmed Wali Karzai back at square one—an enigmatic and influential powerbroker whose protestations of innocence either make him “a candidate for an Oscar,” as one NATO commander has put it, or “the most maligned man in Afghanistan.”

In a country brimming with warlords, strongmen, and opportunists, AWK has attained an aura of controversy all his own. For years, he’s been at the center of drug smuggling and corruption allegations, accused of undermining the central coalition objective of forging a stable central government. From his perch as the chairman of the Kandahar Provincial Council, he’s said to control a vast patronage network that gives him a stranglehold over the local economy; his sprawling web of financial interests allegedly includes holdings in the lucrative private security and contracting industries.

“His control of private security forces, as well as his influence over contracting firms…allows him to enforce his political will in the city and exert influence over all business transactions,” wrote Carl Forsberg, an analyst at the Institute for the Study of War, in a paper published last spring. Forsberg also reported that Karzai’s political and business empire in Kandahar had grown to the point where, “by the end of 2009, all significant institutions desiring influence within the framework of the post-2001 Afghan government were dependent upon his blessing.”

Just the same, diplomats and military officials can’t seem to agree on whether AWK is an asset or a liability. The Obama administration, after taking a more hard-line approach toward AWK (and Hamid Karzai, with negative results), has apparently made a conscious choice to draw him closer into the fold, particularly in the lead-up to the military’s long-planned Kandahar offensive, which is now underway. Complicating matters further, AWK is reportedly on the CIA’s payroll and has been since prior to 9/11, according to Bob Woodward’s latest book. (He has acknowledged providing information to the CIA, but denies that he’s a paid agency asset.)

Though charges about his involvement in illicit activity may be whispered on the streets of Kabul and Kandahar, and repeated in blind quotes by NATO officials, none of the myriad allegations surrounding AWK have been proven. Hamid Karzai, meanwhile, has resisted international pressure to remove his brother from power without firm evidence of his involvement in the opium trade or other wrongdoing. But, a White House official has acknowledged, “We don’t have the kind of hard, direct evidence that you could take to get a criminal indictment.” So he remains in place, loved and loathed, and under a cloud of suspicion that greatly complicates his relationship with the US.

All along, Ahmed Wali Karzai has strenuously asserted his innocence, claiming the allegations against him are political attacks intended to weaken his brother. Mahmood Karzai, an elder brother of the Afghan president, has been just as vocal in protesting claims that he has traded on his family name to amass a business empire. (He is reportedly under investigation by federal prosecutors for extortion, racketeering, and tax invasion—and the target of National Security Agency surveillance.)

Earlier this year, to push back on claims of corruption and other abuses, Ahmed Wali, Mahmood, and another Karzai brother, Qayum, retained Gerald Posner, an American lawyer and journalist who resigned last winter as the Daily Beast‘s chief investigative correspondent following a plagiarism scandal. On behalf of the beleaguered Karzais, Posner has aggressively pursued corrections from media outlets that publish claims about his clients that he considers libelous. So far he’s forced a correction out of NPR and says he’s in negotiations with Fox News to correct a story by Ann Marlowe reporting that an AWK-owned company had supplied the ammonium nitrate used in improvised explosive devices that were killing US troops. (Posner says that the company named in the article, Kandahar Crush, doesn’t exist.)

Since July, Posner’s letters to the editor have cropped up in major papers, including the Wall Street Journal and the New York Times, questioning the accuracy of reports on the Karzais and defending their integrity. In a recent letter to the Philadelphia Inquirer, Posner wrote that Ahmed Wali Karzai “has endured years of false rumors and accusations concocted by political enemies. He has never been charged with any wrongdoing.” In a Washington Times op-ed on Friday, responding to the news that Mahmood Karzai was being investigated, Posner wrote: “From what I know about my client’s businesses and his own integrity, it is a waste of American taxpayers’ money to have the U.S. attorney devote valuable resources to try to develop a case against a man who has tried his hardest to set an honest standard for building a viable and democratic Afghanistan. Moving against men like Mahmood Karzai instead of concentrating on the real enemy—the Taliban and the real kingpins of corruption—is a sure way for the United States to lose the war in Afghanistan while sending the signal we don’t know who our real friends are.”

Posner, who wrote a sympathetic story for the Daily Beast about Mahmood and Ahmed Wali Karzai, says he subjected the brothers to “what I would call my mock cross-examination” before agreeing to represent them. “What I’m trying to do is dust off my legal license and make sure the coverage is at least by the rules,” he says.

Posner says he was aware of the DEA letter—though he hasn’t read it, nor was he the lawyer who secured it. It was another attorney working on AWK’s behalf who had compelled the agency to produce the document through a Freedom of Information Act request. Posner did provide me with another letter, which he had forced out of the Army’s Criminal Investigative Command using similar methods. Dated August 30, it states that the command’s Investigative Operations Division has “no record of any past, present, or pending investigations” involving Mahmood, Ahmed Wali, or Qayum Karzai. Posner confesses that he was surprised by this response. “I thought I would get a drop dead response: ‘we don’t tell people whether they’re under investigation or not.'”

Having not yet seen the DEA letter, the fact that Ahmed Wali Karzai was talking about it publicly—and announcing it would be the focus of a presidential press conference—had caught Posner by surprise. He had been trying to get AWK on the phone (not always an easy task) to find out what the letter actually says. Whenever one of his Karzai clients surface in print in connection with a surprising or scandalous piece of news, Posner says, he always follows one rule of thumb: “Anything is possible in Afghanistan, so check.”