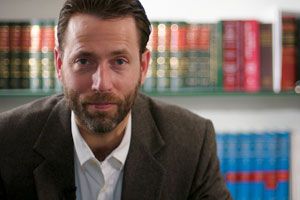 Things were getting shaky for the tea party-backed Republican Senate candidate Joe Miller even before his ethics violation as a local government employee was splashed all over the news in Alaska this week. A new poll from Hays Research shows Miller’s ratings taking a nose-dive in the state. Via Mudflats:

It’s certainly worth noting that this poll was taken before last Sunday’s debate, where Miller admitted that he was suspended for three days in 2008 for an ethics violation. This was also before a court forced the release of Miller’s personnel records, which included more details about the case and indicated that Miller had lied about his actions. But the poll did arrive after weeks of Miller trying desperately to dodge questions about his past—with his private security guards going so far as to handcuff a reporter who tried to interview him at a public event. [UPDATE: This wasn’t included in the initial release, but it should be noted that the poll was commisssioned by the IBEW Local 1547, which has endorsed Democrat Scott McAdams in the race.]

Miller now admits that it was “naïve” to expect that he could keep the news media and the people of Alaska from asking questions about his history, which he attributed to not being a “professional politician.” But operating under an air of secrecy and hostility toward the press only served to bring him a whole lot of negative attention in the final weeks before the election. Perhaps hoping to turn the trend around, Miller is hosting a “Change D.C.” rally in Anchorage on Thursday, which will feature appearances by Sarah and Todd Palin. (I guess the Palins got over his awkward commments about whether she’s qualified to serve as president.)

So if Alaskans are jumping off the Miller boat, where are they going? The Hays poll also asked likely voters, “If the election for U.S. Senate were held today, and the candidates were Joe Miller, Scott McAdams, Frederick Haase, Tim Carter, Ted Gianoutsos, or another candidate you have to write in, for whom would you vote, or are you undecided?” The results found Democrat Scott McAdams now ahead, at 29 percent to Miller’s 23 percent. The majority of respondents, 34 percent, said they’d write someone in—the most likely option being incumbent Sen. Lisa Murkowski. Another 13 percent of voters said they are still undecided.

Meanwhile, Murkowski’s write-in bid got a boost Wednesday, as Alaska’s Supreme Court ruled that voters could be shown a printed list of names of write-in candidates in polling places. This could significantly improve the chances that voters not only remember her name, but that they spell it correctly.