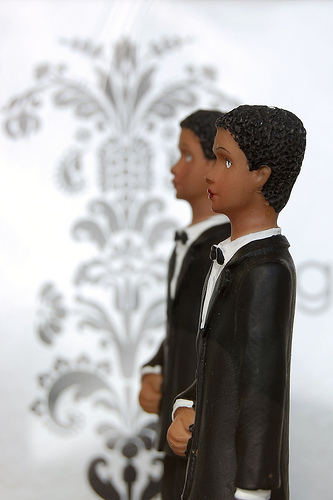 Friday marked the official demise of Don’t Ask, Don’t Tell, 18 years after it was first put in place under President Bill Clinton. Could the 15-year-old law that made it a federal policy to pretend gay marriages don’t exist be the next to go down?

The Senate Judiciary Committee held a hearing this week on the “Respect for Marriage Act,” a bill that would essential nullify the Defense of Marriage Act (DOMA) that Clinton signed into law 1996. The federal prohibition means that same-sex couples—even those who live in states where their unions have been legalized—are not given the same federal protections as heterosexual pairs. They aren’t allowed to take tax write-offs or family leave, and if a same-sex spouse dies, the partner can’t collect their pension or Social Security.

There are already up to 80,000 gay couples who have been married in the five states and the District of Columbia where gay marriage is legal. On Sunday, many more will join their ranks as gay marriages are performed in New York, too, for the first time.

The proposed new law, from Sen. Dianne Feinstein (D-Calif.), would end DOMA and allow those couples the same federal rights as any other married couple. The the Obama administration voiced support for the measure this week as well. Of course, the bill is opposed by gay marriage foes. Even if it passes the Senate this year (which is probably a stretch), it wouldn’t go anywhere in the GOP-majority House.

A taste of that opposition, via the Los Angeles Times:

But Tom Minnery, senior vice president of Focus on the Family, which opposes gay marriage, said there was a “mountain of evidence” that showed the best environment for children was an “intact home with a married father and mother.” Minnery noted that voters in 31 states had rejected gay marriage.

In a video that’s been making the rounds online, Sen. Al Franken (D-Minn.) rips Minnery apart for his inaccurate claims about a Department of Health and Human Services report that he cites as evidence that children who grow up with two opposite-sex parents are better off. As Franken points out, the report only says that kids are better off with two parents who are married and in the home—the HHS report makes no mention of the parents’ gender.

What’s most interesting to me, though, was Minnery’s suggestion that because a number of states have rejected gay marriage, the federal government should respect that. In reality, though, this bill doesn’t seek to impose anything on those states. States that have legalized gay marriage will continue to marry gay couples. Those that haven’t will continue to not marry gay people.

It’s basically a bill that would stop the federal government from interfering in the states—something that Republicans have supported on, for example, clean water protections. But apparently “states’ rights” don’t extend to marriage.