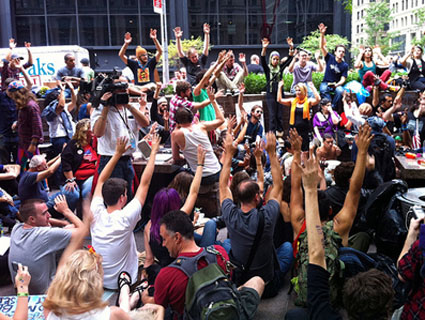 In July, Adbusters, the Canadian anti-consumerist magazine, announced an ambitious protest against corporate greed, inviting 20,000 “redeemers, rebels, and revolutionaries” to Occupy Wall Street in mid-September. “Are you ready for a Tahrir moment?” it asked, name-dropping Cairo’s Tahrir Square to suggest that this would be the beginning of the American version of the Arab Spring. In response to the call to “occupy Wall Street,” 500-750 fed-up Americans descended on Manhattan’s Zuccotti Park last week to shake the foundations of market capitalism. Since then, 100 activists have been arrested, police have pepper-sprayed peaceful protesters, and Yahoo barred users from spreading the #occupywallstreet message via email. Yet as it enters its second week, the campaign’s presence in the streets has dropped to just a few hundred supporters and its goal of kickstarting a popular movement feels a long way off.

What gives? There are plenty of reasons to be pissed off at the superrich and Wall Street. So why is a campaign that says it stands for the 99 percent of us lacking traction? Here are four more reasons why Zuccotti Park hasn’t yet become the next Tahrir Square:

1. The kitchen-sink approach: Occupy Wall Street’s lack of focus is embodied by this Adbusters post titled, “Hey President Obama, get ready for our one demand!” Here’s the opening sentence: “On Saturday thousands of us will occupy Wall Street. We will wave our signs, unfurl our banners, beat our drums, chant our slogans…and then we’ll get down to business and hold several people’s assemblies to decide what our ‘one demand’ will be.” First make noise, then decide what the noise is all about?

In the clip below, a protester tells Waging Nonviolence that “the demands will come…and they will come organically out of these people.” But so far, it’s been a whole lot of posturing, conch passing “mic checks“, and white noise. Check out this catalog of “one demands” from the “Occupied Territory of Wall Street,” a Christmas list that includes ending capital punishment, wealth inequality, police intimidation, corporate censorship, joblessness, American imperialism, and war. There’s something there for everyone, but no one clear message that can carry a movement forward.

2. Police brutality steals the spotlight: Coverage of the protest spiked after a wave of arrests and scenes of police brutality, like the pepper-spraying incident below, were posted online. More examples of New York cops getting rough can be found here, here and here. More than anything else that’s happened so far, the crackdown has made the mainstream media belatedly pay attention to Occupy Wall Street. But the coverage has fed the cop vs. protester storyline, which overshadows the campaign’s populist message. And since the campaign hasn’t established a message, it can’t convince the media to shift its focus to what it really stands for.

3. The Anonymous factor: The #occupywallstreet campaign got a publicity bump when the hacktavist collective Anonymous came on board. But Anonymous made the campaign’s goals even fuzzier by declaring that it would “incessantly repeat one demand in a plurality of voices—we want freedom.” Then, last week, Anonymous said it would be shifting its priorities away from occupying Wall Street and onto seeking retribution for the execution of Troy Davis. Yet shortly after the pepper-spray incident on Saturday, Anonymous jumped back in and took credit for leaking the personal information on the spray-weilding cop. Anonymous’ amorphousness and retaliatory tactics aren’t the stuff of movement building. Plus, it’s hard to be taken seriously as accountability-seeking populists when you’re donning Guy Fawkes masks. 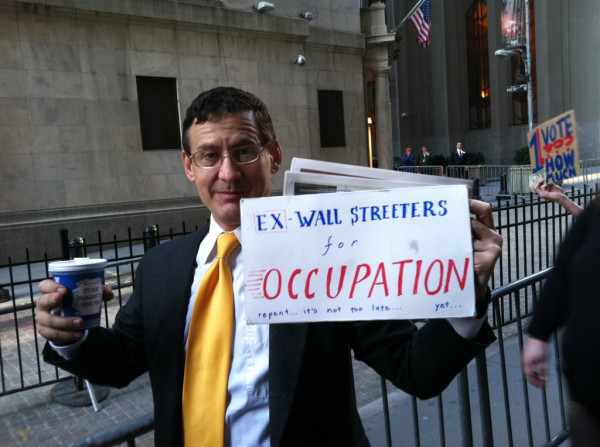 4. The usual suspects: One reason why the protests in Tahrir Square were impossible to ignore was that they brought together a cross-section of Egyptians—the young, the old, women, children, students, blue-collar workers, upper- and middle-class democracy advocates. So far, Occupy Wall Street has brought out the usual suspects, as well as the odd Internet millionaire and a few ex-Wall Streeters (left). But it hasn’t drawn in a wide swath of Americans just yet. That may not be entirely its fault: In the midst of a recession, who’s willing to to take the risk and play hooky from their job or job search to camp out on Wall Street? So far, this is more a movement for dreamers than for middle-class Americans trying to make ends meet.