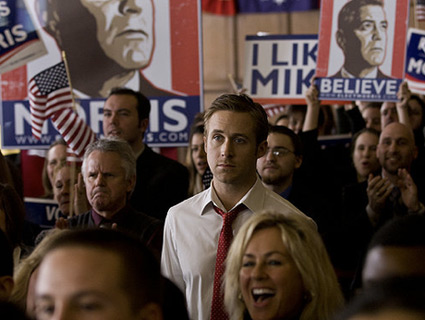 Ryan Gosling in the 2011 political thriller "The Ides of March"Screenshot: Asawin Suebsaeng

The Ides of March

George Clooney’s latest directorial effort, The Ides of March, fits rather snuggly into the mood of the 2012 election season. Working off a script based on Beau Willimon’s 2008 play Farragut North, Clooney & Co. serve up dirty politics, a pitiless primary, a candidate of hope and change, plenty of liberal angst, and—as an apparent throwback to the ’90s—an intern-centric sex scandal.

The political thriller embeds the viewer in the war room of Democrat Mike Morris’ presidential campaign during the final days before the decisive open primary in Ohio. In the heat of televised debates and media interrogation, Morris (played by Clooney, seasoned and stoic as ever) doesn’t give off the faintest scent of a character problem. Morris—think an amalgam of Gavin Newsom, Barack Obama, and John F. Kennedy Jr.—openly brands himself as an atheist, an unabashed lover of green jobs, a foreign policy dove, and a tough opponent of the death penalty. But in spite of his considerable charisma and grassroots pull, he’s stuck in a dead heat for the nomination, up against the safer, more traditional Sen. Pullman.

At the center of all of this is the Morris campaign’s wiz-kid media consultant, Stephen Myers (a pitch-perfect Ryan Gosling), a rising star in the Democratic Party and a savvy practitioner of the backroom ballet of scuzzy politics. But sometime during the election cycle, Myers passionately bought into the governor’s rhetoric, sucking down the “delicious” Kool-Aid of the Morris camp. “I don’t have to play dirty anymore,” Myers proudly swears. “I got Morris!”

Channeling the dark reality of American politics, The Ides of March goes from idealism to opprobrium faster than you can spell “Yes We Can.”

As Myers finds himself at the heart of a devastating scandal, his idealistic chimera caves in on him from every angle. Eventually, the hotshot strategist has to come to terms with the sad realization that Morris might be just as much of a cold, ruthless crook as the next electable candidate. Predictably, Myers starts rapidly swapping out his starry-eyed outlook and loyalty for career moves and personal vendettas. Gosling, who scored major indie points for his work in compelling, low-budget fare like The Believer and Blue Valentine, handles his character’s moral degeneration with precision and a chilling, poker-faced drive.

The Ides of March does, however, suffer from a couple striking flaws. For instance, the character of Molly Stearns, a campaign intern, is not nearly as developed as she should be. For all of the raw emotional and sexual energy Evan Rachel Wood brings to the role, her character stalls in stock-character neutral. Also, some of the shortsightedness and naivete of these supposed campaign masterminds will inevitably prompt eyerolling among DC insiders looking for realism.

But under Clooney’s steady directorial hand, the film paints a vivid portrait of a world in which politics is bad faith and strategy is controlled chaos. Clooney, whose past directing credits include the much-hailed Good Night, and Good Luck and the gallows-humor-laden Confessions of a Dangerous Mind, takes a commendably lean, economical approach, eschewing barnstorm flash to focus on the absorbing tension of sharp dialogue and uniformly solid acting (big points for Philip Seymour Hoffman and Paul Giamatti as rival campaign managers, as well as the reliably adept Marisa Tomei, playing a New York Times reporter who swaggers and looks like a lovably defanged Naomi Wolf). 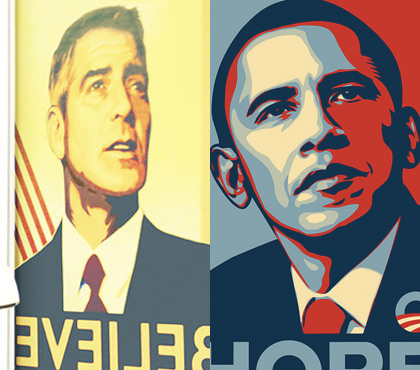 Surprisingly, the film’s numerous explicit parallels to modern-day politics are convincing and nimble, and, most importantly, they do not feel forced. This is in itself a significant accomplishment, considering that countless political movies from the post-9/11 era fumble under the weight of their heavy-handed analogs, from hard dramas like The Ghost Writer and Lions for Lambs to star-studded satires like War, Inc. and American Dreamz.

The Ides of March gets a wide release on Friday October 7.