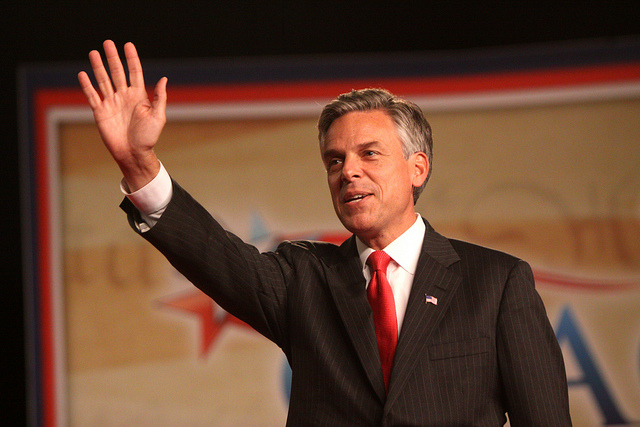 It was a homecoming, of sorts. On the eve of the New Hampshire presidential primary, Jon Huntsman returned to the Exeter Old Town Hall Monday night for his final rally in this state. Huntsman had launched his campaign in Exeter back in June, but the two events couldn’t have been more different. This summer, as Huntsman recalled, “a few people” showed up for his Exeter launch, an indifferent crowd with “a look of disbelief.” And why wouldn’t they have? Huntsman was an ex-diplomat, just returned from years in China, unknown to most anyone outside Utah.

Fast forward more than 170 public events, and the hall shook with excitement Monday. Reporters and cameras crowded into the upper balcony; before speaking, Huntsman did interviews with the popular talking heads Greta van Susteren of Fox News and CNBC’s Larry Kudlow. Then, as the hundreds of supporters jammed into the 157-year-old hall grew restless, Huntsman and wife Mary Kaye emerged. The crowd roared with approval. Both Huntsmans looked at ease at the center of it all, more comfortable than they have in the past week. Mary Kaye led with a genuine, heartfelt, and—most important of all—brief introduction, and then Huntsman took control. The crowd hung on his every word.

“Ladies and gentlemen, can you feel a little bit of momentum in the air?” he exclaimed. “Can you feel the energy out there, ladies and gentlemen?” When he finished, duel confetti guns went off, raining down flakes of red and white and blue. U2’s “Beautiful Day” filled the hall.

Huntsman is peaking at just the right time. A recent American Research Group poll showed him in second place in New Hampshire, surpassing Ron Paul, while others show him further back but still surging.

Yet there was an inescapable feeling in Exeter that this is as good as it gets for Jon Huntsman. This is Peak Huntsman.

Here’s why. Huntsman has staked his entire campaign on a strong showing in New Hampshire; anything less than second place and poof, all of his momentum here in the Granite State is gone. A second-place finish behind Mitt Romney, not unlike Rick Santorum’s near-win in Iowa, could bring in some much-needed donations to help him compete in South Carolina, the next primary fight. But even then, Huntsman’s prospects are dim.

Huntsman has little, if any, campaign infrastructure in South Carolina—or anywhere else, for that matter—and notched 1 percent there in a recent CNN/Time poll. That’s not surprising: Huntsman’s more moderate positions on social issues don’t appeal to South Carolina Republicans in the same way they do to New Hampshire voters. “Jon Huntsman’s profile as the most liberal candidate in the field really limits his growth potential and makes him very unlikely to gain any meaningful traction,” South Carolina pollster Jon Lerner told the Washington Post‘s Chris Cillizza. And at any rate, Huntsman doesn’t have time for 170 events in South Carolina to win over skeptics. Mitt Romney, meanwhile, has campaign operations in almost every state, and leads in South Carolina polls.

Even before primary day, there were reminders of Huntman’s limits. National Journal reported Monday night that Huntsman failed to qualify for the ballot in Arizona due to a “notary issue.” (The campaign says it will challenge the state’s decision.)

This isn’t to say it’s impossible for Huntsman to defy political logic. He could, in theory, inject millions of his own money to keep his campaign alive after new Hampshire. Or his billionaire dad, Jon Huntsman Sr., could step up with a six-figure check to keep Huntsman 2012 or a pro-Huntsman super-PAC chugging along. And that could put enough fuel into Huntsman’s tank to keep him alive through South Carolina’s primary on January 21 or Florida’s at the end of the month.

Barring a minor miracle, however, it’s hard to see how Huntsman’s campaign survives for much longer, much less generates the kind of support seen here in New Hampshire. The scene inside the Old Town Hall, then, was a glimpse at what might’ve been, but ultimately was not, for Jon Huntsman.