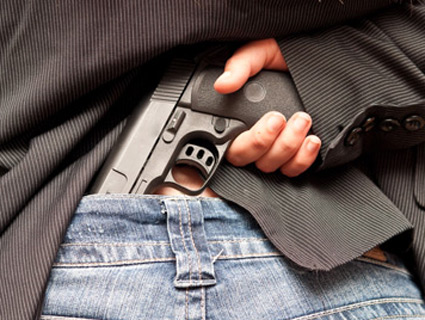 As a leader of the Tea Party Patriots, Mark Meckler has settled into a role as the public face of this movement of irate conservatives. But in New York last month, he accidentally became the poster boy for another group of feisty activists, thanks to his arrest on felony gun charges.

En route to California in December, Meckler attempted to check in a handgun and several cartridges of ammo at New York’s La Guardia airport. He was arrested on the spot and charged with second-degree criminal possession of a weapon. The tea party leader had a California permit to carry a concealed weapon, but it isn’t valid in New York. Meckler, who was back in court this week, faced up to 15 years in prison if convicted.

When he was released from jail, Meckler actually ran away from reporters, sprinting across Queens’ notorious “Boulevard of Death” rather than use the opportunity to, say, decry New York’s strict gun laws. But that hasn’t kept gun groups and other conservative activists from using his case to continue lobbying to weaken the state laws like those Meckler violated in New York.

Gun activists persuaded the House in November to pass a law that would require states like New York to recognize concealed-carry weapons permits issued by other states. A similar version will be taken up in the Senate this year, making Meckler’s timing impeccable. Gun activists have pointed to his arrest as an example of why such a law is needed to protect honest citizens from ridiculous arrests for possessing a gun that’s legal in their home states.

While its laws have come under heavy fire after Meckler’s arrest, New York City’s strict gun laws have actually helped keep the city’s residents far safer than in places with laxer regulations. New York is one of nine states that doesn’t recognize out-of-state concealed carry permits.

New York and neighboring New Jersey have among the lowest rates of gun deaths in the nation. In New York, 4.95 people out of every 100,000 residents die each year from gun-related injuries. Overall, the state has a low rate of gun ownership, with only 18 percent of households owning a gun. (Of those nine states that don’t recognize other states’ concealed weapon permits, six rank at the very bottom of the nation in terms of gun deaths, despite in some cases being densely populated.) By comparison, in Mississippi, where more than half of all households own a gun, the death rate is more than four times higher than New York’s.

It’s perhaps no surprise that states with lax gun laws have more gun deaths. Along with law-abiding citizens just looking to protect themselves, such laws also place guns—and concealed-carry permits—in the hands of criminals. A study in Texas by the Violence Policy Center that looked at the state’s concealed-carry law between 1996 and 2000 found that concealed-handgun permit holders “were arrested for weapon-related offenses at a rate 81 percent higher than that of the state’s general [adult] population.” The New York Times recently found 2,400 concealed-carry permit holders in North Carolina who’d been convicted of major crimes over a five-year period. Ten of them had killed people—not in self defense. Other states examining their own concealed-carry programs have found that many criminals had sought and obtained concealed-carry permits, and many went on to commit crimes with those guns.

Given these statistics, New York can be forgiven for not wanting to have its own gun laws determined by states like Texas. But gun groups, and even some states’-rights-defending tea party activists, would like to see the federal government force New York and the other states that don’t offer reciprocity to recognize concealed-carry permits issued by states like Florida or Utah, where there are few restrictions on who can obtain one. The bill pending in Congress right now has been heavily opposed by many state and local officials in states with strong gun laws. Among them was New York City Mayor Michael Bloomberg, who along with Boston Mayor Thomas Menino, co-chairs of the bipartisan Mayors Against Illegal Guns coalition.

After the House passed the reciprocity act in November, Bloomberg and Menino issued a statement saying, “Ten months after a disturbed man carried a concealed weapon to shoot Congresswoman Gabrielle Giffords and 18 others, six fatally, the House voted today to gut state laws on who can carry concealed, loaded guns in public. This was an absolutely embarrassing display of putting special interests and fund raising ahead of public safety.”

A Bloomberg spokesman told me that the Meckler arrest doesn’t change the mayor’s feelings about the bill. He said, “If you got ticket while driving out of state on I-95, would you call for a federal law exempting you from tickets when the speed limit on the road differed from the limit in your home state? I doubt it. State by state gun laws could not be easier to find; in fact, the NRA even posts them prominently on their website. Forcing states to bring gun laws down to the lowest common denominator would undermine local laws, undermine local police, and undermine public safety.”

The dangers of the federal reciprocity bill are not academic ones. The deadly pitfalls of reciprocity have already become pretty apparent. Florida, for instance, doesn’t have a residency requirement for concealed carry permits, so virtually anyone can apply for one, even through the mail, and then force other states with Florida reciprocity agreements to recognize it. The Philadelphia Daily News found in 2010 that 3,100 Pennsylvania residents had obtained Florida concealed-carry permits. Some of them had been rejected at home because of prior arrests for serious crimes, but Pennsylvania was forced to recognize the Florida permits. In September 2010, a man who’d been denied a concealed-carry permit several times by Pennsylvania murdered a teenager with a gun he’d been legally allowed to carry by the state of Florida.

It’s unclear if Meckler himself actually supports the reciprocity law. He didn’t respond to an email putting the question to him. But in an email to supporters last month he wrote that his arrest was “a perfect example of our liberties under attack.”

On Thursday, the Queens district attorney allowed Meckler to plead guilty to disorderly conduct and pay a $250 fine for his crime. His Glock, though, will be destroyed. About that, Meckler is not happy at all. After his hearing Thursday morning, he issued a statement decrying the ways in which he believes his constitutional rights have been violated:

No one should ever have to go through what my family has been through, simply for exercising a fundamental right, specifically enumerated in the United States Constitution. I am committed to making sure no one does. And I’m willing to work with anyone…anyone, who agrees that it’s time for the people to govern themselves once again.

Will we as citizens fight for our inalienable right to govern ourselves, or will we quietly allow ourselves to be “governed” into submission by a ruling elite, disconnected from our citizens and our communities? Only history will tell, but I intend to fight.

The irony of Meckler’s statement, of course, is that the people of New York City have exercised self governance. “The People” of New York used their lawmaking abilities to send a strong message that they don’t want people like Meckler carrying concealed, high-powered weapons on the streets of their city.