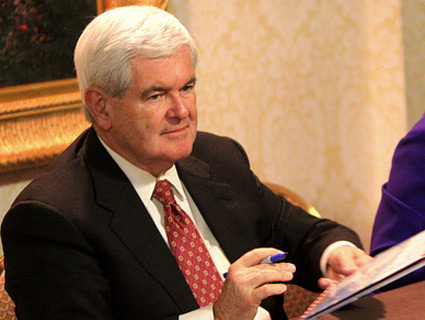 A ghost from Newt Gingrich’s past paid him a visit in South Carolina, and it wasn’t the one you’re thinking of. In late January, as reporters buzzed over the ABC News interview with the candidate’s second ex-wife, Gingrich was finishing up a town hall at a dove-hunting ranch in the low-country town of Walterboro. That’s when a balding, middle-aged man stood up and announced himself as a first-time caller, longtime listener: “I’ve been following your career,” he said. “And I was excited about the revolution in 1994. I was so excited about it I read your reading list”—a reference to Gingrich’s tip sheet for freshman legislators. “You know, Alvin Toffler…my eyes teared-up reading that stuff.”

These days Gingrich doesn’t spend much time talking about Alvin and Heidi Toffler, the world’s most famous octogenarian pop-futurist power couple, and the brains behind Future Shock, The Third Wave, and Powershift. But the Tofflers, whom Gingrich has long counted as friends and mentors, have deeply influenced him, and their ideas have formed the foundation for much of what he says. He devoted a two-hour session of his mid-1990s college course to teaching The Third Wave, wrote the foreword to their fifth book (although Alvin’s appears as the sole author of Future Shock and Third Wave, the two have always collaborated), and adopted their new-agey vernacular as his own. When, in 1995, a Wired reporter ask Gingrich what he thought of Al Gore, he called the vice president “totally Second Wave“—Tofflerese for “so last week.”

There’s a pretty good reason why Gingrich has stopped talking about the Tofflers, though: He’s running for president. Their work focuses on outlining the social, political, and economic revolutions that will define the years to come: Future Shock posits that the great challenge of our times will be how efficiently we adapt to technological advances (analogous to “culture shock”). The Third Wave argues that mankind is transitioning from an industrial “second wave” of civilization to an information-based “third wave.” But beyond their prescient analysis of the emerging information age, the duo predicted a new era of social norms that are straight out of Pat Robertson’s nightmares—polygamy, baby-making factories, gay parents, and serial marriage. Not exactly the types of concepts that play well with the conservative voters Gingrich is trying to woo.

Gingrich first met the Tofflers in the early 1970s, at a conference on future studies in Chicago headlined by the couple. (“[A]nyone who took the trouble to fly all the way from Georgia for my speech was obviously a man of impeccable judgment,” Alvin joked to the New York Times in 1995.) A few years later, while Gingrich was teaching geography at West Georgia College, the pair invited him to attend their “Conference on Anticipatory Democracy” in Washington as the lone Republican in a sea of Democrats.

They hit it off. When Gingrich was elected to Congress, he started the Conservative Opportunity Society and the Congressional Clearinghouse on the Future, and invited the Tofflers to address both groups. As he began to articulate publicly his own vision for the future, Gingrich borrowed heavily from his mentors.

Gingrich infused his 1984 book, Window of Opportunity, with themes from Future Shock and The Third Wave—and for his efforts, received their glowing endorsement. “One may violently differ with many of congressman Gingrich’s views, while still admiring his intellect, originality, and future consciousness,” Alvin Toffler wrote in a blurb.

In Future Shock, the Tofflers anticipated the rise and significance of genetically engineered crops; in Window, Gingrich gushes about the possibility of “new strains of wheat that will function as legumes.” In Future Shock, the Tofflers float the idea that adolescence is on its way out the door—writing of “children who at twelve are no longer childlike; adults who at fifty are children of twelve;” in Window, Gingrich writes, “it is conceivable that, by our grandchildren’s time, adolescence will have become a thing of the past.”

When Gingrich rose to power, he brought the Tofflers with him, introducing them to the Republican mainstream, even if they were never fully accepted by it. (As Reagan Education Secretary Bill Bennett put it, “If futurists are really futurists, why do they bother writing books? Why don’t they play the market?”)

The Tofflers believed parents would have the option to “buy” children at the “embryo emporium” or to “farm them out to professional parents.”

Future Shock, Gingrich told a Washington audience in 1995 during his first week as speaker, was one of “four books [that] describe everything we’re going through, for all practical purposes, except the details.” He told the House Ways and Means Committee: “[A]bout every policy we should ask the question, ‘Does it accelerate our transition into a third-wave information age, or does it slow it down?'” He told the American Hospital Association that it should consider forming weekly study groups to study the Tofflers.

“Republicanism is merely Gingrich’s politics,” Michael Kelly wrote in The New Yorker in January 1995. “Tofflerianism is his religion.”

The information age predictions were one thing. But there was another side to the Tofflers’ prophecies that was fiercely at odds with conservatives’ own visions—specifically when it came to family life. Their brand of futurism was, at its heart, a Marxist formulation, drawn from their past experience as assembly-line workers in Ohio. As John Judis explained in his review of their work in 1995: “Like Marx they see history as consisting of progressive stages, propelled forward by underlying changes in the way people produce goods, services, and ideas.” They weren’t yearning for a return to the 1950s, in other words, but envisioned a future that would be entirely unlike anything that came before.

The Tofflers predicted in Future Shock that, due to longer life-spans, increased leisure time, and dramatically different social norms, adults would have a “marriage career” allowing for at least three different stages—incidentally, the same number of marriages that Gingrich has had: “It is the natural, the inevitable outgrowth of a social order in which automobiles are rented, dolls traded in, and dresses discarded after one-time use. It is the mainstream marriage pattern of tomorrow.” Rules against polygamy might be relaxed, and open relationships might even be encouraged: “The old male fantasy of the Captain’s Paradise may become a reality for some.”

In place of one, lifelong marriage, they predicted, people would experience marriage in a series of different stages. “As serial marriages become more common, we shall begin to characterize people not in terms of their present marital status, but in terms of their marriage career or ‘trajectory,'” they explained. “This trajectory will be formed by the decisions they make at certain vital turning points in their lives.” (The happily married Tofflers, it should be noted, have proved to be an exception to their own forecast.)

Well before gay marriage was a serious political issue, they suggested that in the future “homosexuals may be acceptable parents.” And in contrast to conservative arguments that marriage exists solely for procreation, they believed the raising of the family would become extraneous to the actual institution of marriage, with the advent of “professional parenthood.”

In the future, they contended, parents would have the option to “buy” children at the “embryo emporium” or to “farm them out to professional parents.” “With this powerful external pressure removed,” they wrote, “those who stay together would be those who wish to stay together, those for whom marriage is actively fulfilling—those, in short, who are in love.” The Tofflers believed a new class of professional child-rearers would “streamline” the family. The nuclear unit, in other words, could stand to benefit from some Lean Six Sigma.

None of these ideas ingratiated the Tofflers to right-wingers. Pat Buchanan reportedly called their theories “some kind of nonsense.” In 1994, Mississippi Republican Gov. Kirk Fordice accused them of leading the country away from its core values. Ann Coulter recently characterized Gingrich’s Third Wave kick as “Fidel Castro-style speeches.”

Even the Tofflers were a bit perturbed by how deeply they’ve been linked to Gingrich: “Some of Newt’s ideas, we disagree with strongly—prayer in the school, family values, the Christian Right,” Alvin told the New York Times in 1995. “We are not Newt Gingrich. Newt Gingrich is not Toffler. Can we put that in caps? NEWT GINGRICH IS NOT TOFFLER!” (The couple declined an interview request from Mother Jones.) Gingrich, for his part, has made clear that he disagrees with his mentors on many of their predictions, although he shares their big picture view.

Gingrich’s ties to the Tofflers haven’t become much of a campaign issue. The only opponent to raise Gingrich’s connection to futurism was Rep. Michele Bachmann—once—in an interview with Glenn Beck. “[T]here’s a book Newt Gingrich wrote the foreword to with Alvin and Heidi Toffler, where they were promoting that idea of transnational government, which a lot of us would see as a form of one-world government,” she said.

Still, every once in a while his old impulses float back to the surface. Last week, Gingrich echoed the Tofflers’ fears, expressed in a 1995 interview, of “arrogant regimes [that] play God with future generations.” At an anti-abortion forum in South Carolina, he likewise warned, “Somewhere on this planet there will be a dictatorship that uses science in a way that is truly grotesque…[T]here is a really great danger posed by scientists and those technicians who believe that they now have Godlike powers.”

Gingrich’s controversial suggestion in November that child labor laws be eased to allow poor kids to work in schools might likewise have had a familiar ring to longtime Tofflerians. “The alienation of youth today flows in large measure from being forced to accept a nonproductive role in society during an endlessly prolonged adolescence,” they explained in The Third Wave. “The electronic cottage opens an alternative way to bring youth back into socially and economically productive roles, and we may see, before long, political campaigns for, rather than against, child labor.”