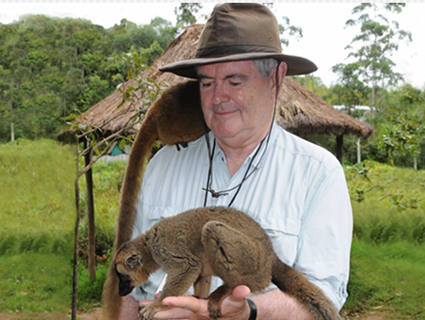 This is not a dog, but you get the point.Courtesy of <a href="http://petswithnewt.com/home/page">Pets With Newt</a>

In 2009—shortly after accidentally naming the founder of Pink Visual, a California porn superstore, “Entrepreneur of the Year“—Newt Gingrich’s Business Defense and Advisory Council accidentally bestowed the same award to the Dallas strip club “The Lodge.” Or tried to, anyway. Dawn Rizos, the club’s owner, received a letter out of the blue from Gingrich’s 527, American Solutions for Winning the Future, informing her that “Newt is looking forward to finally meeting you face to face“—and asking for her to make a $5,000 contribution to the group in order to attend. She happily obliged and booked her travel arrangements, only to find that her invitation was rescinded and her donation returned.

But all was not lost. After receiving her refund, Rizos decided to take her $5,000 and put it good use in a way that would honor the man who’d spurned her: She built a shelter for pit bulls, “Newt’s Nook,” at the Animal Guardians sanctuary 35 minutes north of Dallas. As Pegasus News explained:

The Lodge, the country’s best-known and most-honored gentlemen’s club, helps hundreds of people support their families and further their educations, while setting industry standards for beauty, elegance and integrity.

“So we weren’t surprised to get the award, and we were disappointed to suddenly be rejected,” Rizos said. “But instead of holding a grudge, we decided to make something positive out of his bad manners.”

Gingrich, for his part, recently launched the webite “Pets With Newt,” which invites supporters to “send photos of your pet,” and includes a list of Newt’s 12 favorite zoos (“The Omaha Zoo is one of the three best zoos in America. Its nocturnal house is the best in the world.”) Perhaps Rizos will get another shot at Gingrich’s endorsement.