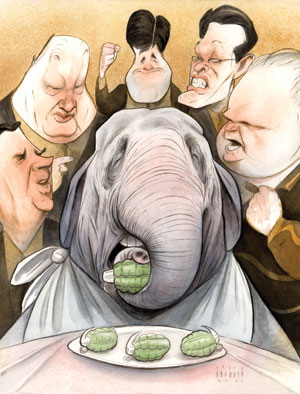 Illustration: Steve BrodnerPity the poor essayist, trolling around for the quintessential anecdote for how the GOP has needlessly alienated soccer/security/nom du jour moms in its quest to brand anyone who has ever used contraception with a scarlet S. Do you revisit Rush calling Georgetown law student Sandra Fluke a “slut” and a “prostitute” for daring to talk about the need for contraception, including for non-sex-related medical uses? Yes, perfect, though perhaps a better example of what happens when a Beckian blatherskite forgets that advertisers are a fickle lot. Maybe the time when Rep. Darrell Issa (R-Calif.) refused to have Fluke—or any woman—appear before his all-male subcommittee on the bishops-versus-birth control fight? Eh, a little procedural. How about the zygote-personhood bills that prompted Oklahoma state Sen. Constance Johnson to offer up an amendment making it illegal to ejaculate anywhere outside a woman’s vagina? Love the nod to Reese Witherspoon’s “reckless abandonment” lawyering in Legally Blonde, but then again, can we privilege that over Ohio state Sen. Nina Turner’s measure to require Viagra users to get a psychological exam? As Turner so thoughtfully noted, “The men in our lives, including members of the General Assembly, generously devote time to fundamental female reproductive issues. The least we can do is return the favor.” And yet, surely props must go to Virginia state Sen. Janet Howell, who kicked off the good-for-the-gander trend back in January, on the occasion of a bill to require women seeking abortions to endure a transvaginal ultrasound: She offered an amendment to force men wanting Viagra to get a rectal exam and a cardiac stress test. It failed by just two votes.

Two votes. In pre-Fluke January. In Virginia. That, and the slow boil over attempts to redefine rape and defund Planned Parenthood, should have been warning enough for Pennsylvania Gov. Tom Corbett to keep his yap shut. But no—Corbett doubled down on transvaginal ultrasound by saying, “You just have to close your eyes.” True, he didn’t add “Just sit back and enjoy it.” And he delicately qualified his support of the mandatory procedure “as long as it’s on the exterior and not the interior,” though it’s perfectly clear that under the bill, “interior” is what most women would get.

Hey, GOP? A bit of simple math: Women are 51 percent of the population and 54 percent of voters. The gender gap between Republicans and Democrats, in presidential elections, has historically ranged from 4 to 11 percent; in Pennsylvania, a key swing state, it was 8 percent in 2008. Fifty-five percent of Americans think abortion should be legal in all or most cases. Sixty-three percent support requiring health plans to include no-cost birth control; 67 percent of independent women do. And a staggering 77 percent of Americans think a petty argument over contraception has no place in the national debate.

“Republicans being against sex is not good,” one GOP strategist told Maureen Dowd. “Sex is popular.”

This sanctimony is not playing as part of the genuine, profound disagreement between (and, guess what, among) liberals and conservatives about whether and when abortion should be legal. It’s playing as needlessly humiliating women with invasive procedures, as denying people the choice of when and whether to have kids, and, frankly, as straight-up slut-shaming puritanism (recall Rick Santorum admonishing married couples that it’s not okay to have sex unless it’s “procreative”). Let’s have GOP strategist Alex Castellanos bring it home: “Republicans being against sex is not good,” he told Maureen Dowd. “Sex is popular.”

Not content to enrage people who like sex? Well, party of Lincoln, you’ve also bullied Latinos, a giant, socially conservative, upwardly mobile, and demographically growing bloc that many analysts see as key to securing the White House—and that as recently as 2004 swung 42 percent for George W. Bush. That was before GOP lawmakers spearheaded some 160 punitive anti-immigration bills in the last two years. Before Mitt Romney—whose own forebears fled to Mexico to avoid anti-polygamy laws—bent over backward to embrace such “self-deportation” measures. Before Rick Santorum demanded that Puerto Ricans switch to English. These days no more than 14 percent of likely Latino voters can see themselves casting a ballot for any of the GOP candidates. Hasta la vista, Nevada!

No one expected you to make nice with gays and their families. Ditto African Americans, Muslims, teachers, climate scientists. But cops? Firefighters? Every other middle-class independent who’s watching his kid’s school fire the lunch ladies? Seriously?

You coulda been a contender! Economy in the tank. Congress successfully gridlocked. Consider: Base energized, Yes-We-Can shock troops disaffected, major donors to the president’s campaign picketing his speeches. True, with Occupy on the rise, it did become (cue Jon Stewart falsetto) awkward that your leading candidate was an unapologetic poster child for the 0.0025 percent. Still, all you had to do was set Clinton ’92 “It’s the Economy, Stupid” messaging on autoplay and coast to November. Instead—a war on ladyparts? As the Cato Institute’s Michael Tanner put it in National Review Online, “Do you remember in the days leading up to the Republican electoral victory in 2010, how the Tea Party marched on Washington with signs saying ‘Birth Control Is Bad’? Neither do I.”

These days no more than 14 percent of likely Latino voters can see themselves casting a ballot for any of the GOP candidates. Hasta la vista, Nevada!

Sure, it’s been entertaining. Schadenfreude, as the German saying goes, is the best freude. But liberals take note: Not only is a robust dialogue crucial for an intellectually engaged democracy, it also happens to be required to Get. Anything. Done. Even if the Republican brand suffers long-term damage (and the jury’s still out), conservatives will make up north of 40 percent of the vote, most importantly in the US Senate.

Surely we are not alone in worrying that the Grand Old Party is losing touch with reality—obsessing on issues entirely divorced from both 21st-century mores and the pressing economic challenges of the day. But excepting Bush speechwriter David Frum’s cri de coeur in New York magazine (rewarded with RINO opprobrium from his colleagues), name-brand Republican thinkers steer clear of a frank diagnosis. They might bemoan a weak field of candidates—George Will has basically written off the White House and tried to rally the troops around holding the House—but no one dares take on the twin planks of Loonyville: Grover Norquist’s no-taxes-never-ever pledge and Roger Ailes’ facts-be-damned spin on the “news.”

We’ve all watched political movements squander opportunity with petty dogma and marginal crusades—usually, it must be said, on the left. Republicans historically had much better message discipline, keeping their oft divergent factions, the social conservatives and small-government enthusiasts, focused on what they had in common. Like winning. But now the agenda is being driven by the extremists of both wings—and nothing is safe as a result. It’s not just Olympia Snowe being driven out of the Senate—even George “Macaca” Allen is now too liberal for the die-hards. Meanwhile, the left—could this be?—may actually have absorbed the lessons of past defeats and been reinvigorated by an infusion of netroots and social media energy.

The realpolitik leaders on the right made a bet that they could ride the latest populist wave as they’ve ridden others, using the momentum to pull the rest of the country rightward. But they got greedy. The current cohort’s overreach threatens to blow 30 years of careful strategizing, from the school-boards-on-up long march to power to Karl Rove’s microtargeting breakthroughs.

What does this portend? Option 1: Centrists who can no longer find purchase on the right find it on the left instead. Option 2: The whole enchilada devolves into Mad-as-Hell mania, round after round of spasmodic fury fanned by bush-league demagogues.

So, dear GOP: If you keep this madness up, magazine editors and late-night comedians will be forever in your debt. But we may well be the only loyal constituency you have left. Up to you.