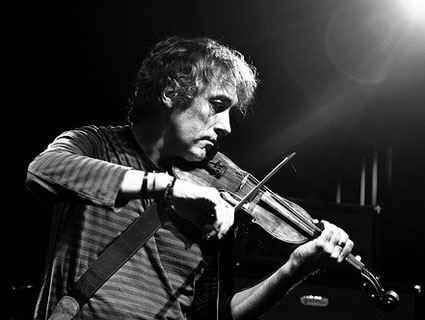 His latest album, Skyline—out last fall in Europe, but released just last month in North America—is a little grittier, even more eclectic, and just as whimsical. Tiersen’s website says he’s inspired by “musical anarchy,” and proposes that we “live in an enormous world of sound we can use randomly, with no rules at all.” On Skyline, he veers from sounds that could accompany a Disneyland ride to the screeches of a wild beast, and dances all around in between.

“Exit 25 Block 20” is a deliciously unsettling sound experiment that begins with screams (animal? human?) and segues into barks and caws, which are then overlaid with happy-go-lucky Steve Zissou sounding stuff, robotic bleeps, and a woman’s voice on a scratchy radio. It feels both contradictory and fulfilling, like the song of a city at rush hour or the hum of a hip restaurant at 8 p.m. on a Friday. “Vanishing Point” is similar, combining planetarium music (you know, the go-to soundtrack of the universe) with a quicker beat, a static whirring, washboard grating, and the screeches of an electric bird.

On the quieter side, there’s “Hesitation Wound,” which kicks off with the percussion of two really high piano keys, but sounding way far off, as if someone is playing on the Scottish Moors and the wind and the waves are getting in the way. In comes a synthesized drone, like the sound of ghost cars inside some forgotten tunnel, and a chorus of bumpy synthesized voices.

Sometimes the album goes a little Amélie on us, what with the toy piano, xylophone, plinging harpsichord, and anything-is-possible-in-life crescendos—especially on the tune “Forgive Me,” which may well convince you that you’ll find your long-lost love if only you run through the lovely late afternoon Paris streets fast enough, and with your hair down.

Oddly, he throws in a couple of tracks that are just kind of mellow-rocky and just kind of…fine. But I’ll take it. The high and the low, the high-flying romantic stuff, the boring, the planetary, the crazy sound cocktails. I’ll take it all.