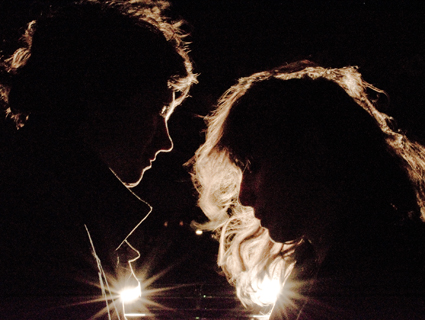 Beach House
Bloom
Sub Pop
There’s some music that pulls you in with its viscerality, with the concreteness of the experience it instills in you, and then there’s dream pop. Focused more on ethereal textures and an oceanic sense of the epic, it can sometimes be deservedly marginalized as easy listening. But it’s a mistake, I think, to label Baltimore duo Beach House as simply dream pop; they’re probably more what pop’s fever dreams sound like. With Bloom, Beach House’s fourth studio album, the pair doggedly pursues a more assertive sound than before, but without compromising any of their dreaminess along the way.

Alex Scally, 29, and singer Victoria Legrand, 30, have been vocally wary of their critical and commercial successes since 2006, when they put out their first, self-titled, release. “Sometimes, I feel like people aren’t even listening to our songs, they’re just listening to the sound,” Scally told Pitchfork in a recent interview. Perhaps for this reason, they vetoed a recent offer by Sub Pop to distribute Bloom as a Starbucks in-store album, destined to be sandwiched between a Billy Joel retrospective and the new Jack White. Interestingly, the duo did allow the use of one of their tracks on the hackneyed Fox “young people” sitcom New Girl—sometimes, Scally explained, you just “need to get a new van.” In any case, they summarily refuse to be defined by their sheer listenability.

Like their previous albums Devotion and Teen Dream, Bloom was produced by just the two musicians using keyboards, guitar, organs, and drum machines, all layered with Legrand’s sultry-yet-powerful Stevie Nicks-esque exhalations. But here their sound is even vaster, thanks to heavier, more assertive drums, richer organs, and more-prominent lead vocals with fewer breathy backing tracks. The effect is a Beach House album that sounds palpably more concentrated. Though this can be tiring—with no ambling breaks for songs like Teen Dream‘s “Walk In the Park”—the heavier drive also gives the album a momentum we haven’t heard from Beach House before. It’s just consistently really good.

With Bloom, the self-described sound hunters have rolled out a few singular synth sounds, like the eerie, metallic melody of “Lazuli” and the half-silly ’80s keyboard beat behind “Wild.” But for the most part, the instrumentation is remarkably consistent with that of their past offerings—Scally and Legrand have no intention of reinventing a sound that’s already uniquely their own.

As far as lyrics, Legrand describes the Beach House ethos best: “How do you describe a feeling without saying, ‘This is the feeling?’ How do you take something completely natural that will eventually transfer to the listener…and go to an imaginary landscape instead?”

Verses like, “Found yourself in a new direction, aeons far from the sun / Can you come? Would they come to breach you?” from the single “Myth” certainly fall into this white-space category. And while some listeners may be put off by how amorphous they can seem—”it’s always a soundtrack to anything,” my friend demurred—without this they wouldn’t be Beach House. It’s exactly what makes their music so vast, and the feelings they elicit at their best so inexplicably euphoric. And thankfully, the range of feeling on Bloom is more relentless, more unabashedly Beach House than ever before.

Check out single “Lazuli” off Bloom: