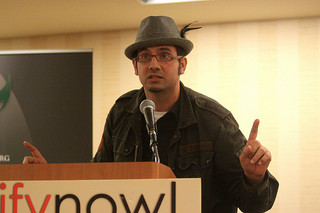 Michael Boldin, founder of the Tenth Amendment Center Gage SkidmoreThe Southern Poverty Law Center published a new report this week on 30 up-and-coming leaders of the radical right. There are some old familiars on the list, like David Duke, and many others who probably won’t come as much of a surprise to regular Mother Jones readers. SPLC singles out some of the chorus of anti-Muslim activists like Pam Geller, Frank Gaffney and David Yerushalmi as people to keep an eye on. There are some gay-bashers in there, too. Birther-conspiracy theorist Joseph Farah, the founder of WorldNet Daily, also makes the list. But not everyone on the group seems to rise to the level of menace that SPLC suggests.

Among those might be Mike Vanderboegh, a former militia activist from Alabama. Vanderboegh is probably most famous these days for having encouraged readers of his blog to break the windows of Democratic Party headquarters after the passage of health care reform, which prompted some of his readers to toss bricks through the windows of a few Democratic congressional offices.

Vanderboegh, though, is a bit more of a complicated character than the SPLC has made him out to be. His rhetoric is certainly inflammatory, but it’s also mostly confined to his blog, which has a very small following. Vanderboegh has also helped bring to light some evidence of wrongdoing on the part of the government in the “Fast and Furious” gun scandal, in which the federal government allowed guns to be illegally exported to Mexico in the hopes of tracking them to major drug cartel leaders. (The ATF agents ended up losing track of thousands of the guns, which later turned up at crime scenes in Mexico and the US.) He’s also got a sense of humor, a rare quality in an extremist. He responded to his inclusion on the list by writing a blog post about it that included a photoshopped picture of Mark Potok, the SPLC senior fellow who tracks right-wing extremism, wearing a tin-foil hat.

Another entry on SPLC’s list that seems slightly off-base is Michael Boldin, the founder of the Tenth Amendment Center, which urges states to nullify federal laws they see as unconstitutional. SPLC links Boldin with the “Patriot movement” and far-right extremists. But it overlooks a lot of the issues that Boldin himself has championed. I met him two years ago at a Tenther conference in Atlanta, which definitely featured some fringey right-wingers, including the John Birch Society. But Boldin stuck out for a number of reasons, not the least of which is that he is a California hipster who travels with tins of sardines in his suitcase to ensure that he eats enough omega-3 fatty acids.

Boldin got into politics through his opposition to the Iraq war, not through the tea party or any other right-wing cause. He is a libertarian, and believes the Tenth Amendment applies to all sorts of things that right-wingers generally wouldn’t agree with. For instance, he and his organization support pot legalization and the right of states to legalize gay marriage. Lately, though, he has been focused on state opposition to the new National Defense Authorization Act because he believes it could allow for the indefinite detention of American citizens—a position that puts him squarely on the side of the American Civil Liberties Union. That’s why he was a little surprised to find himself on the SPLC list. He told me in an email:

I think these people are just lazy and aren’t paying attention to the work we do, the columns I write, or the speeches I give. Or, maybe they’re just exploiting fear of real radicals who use propaganda to advocate their wars, racism to justify their torture, and fear to promote their indefinite detention scheme – both in Guantanamo and here in the U.S. Then again, I just happen to think that most of those dangerous people are wearing suits in Washington D.C.

SPLC deserves credit for keeping tabs on the nation’s potentially violent fringe elements, but it does seem like they are occasionally casting too wide a net in their efforts to identify the next Timothy McVeigh. But then again, it only takes one guy like him to create mass carnage. Maybe when it comes to monitoring extremism, you can’t really have too much information.