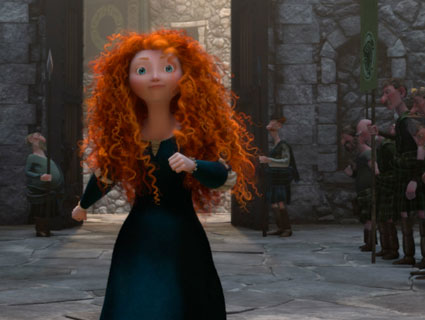 Beautiful yet unfulfilling, Brave will leave you wanting to grow long red hair and visit Scotland, but not much else. Pixar’s first feature with a female lead lacks the depth and originality we’ve come to expect from the animation studio (I’m thinking of you, Up). Instead, the story falls in line with those of the other Disney princesses—a bland cautionary tale filled with just enough action and suspense to keep you awake. La Luna, the excellent short that’s shown before the feature film, is much more entertaining than the main event.

Brave’s opening scenes hold promise—especially when our heroine, a Scottish princess named Merida, rides her horse through the countryside, firing off arrows and nailing targets set up around the forest. But the next 40 minutes are slapstick humor mixed with pathetic attempts at character and narrative development. When Merida turns to magic in an attempt to change her fate and avoid marriage, her plan backfires. Unfortunately, the filmmakers focus on a ridiculous chase scene rather than the consequences of their main character’s brush with magic. Later, as Merida searches for a way to undo the spell, what could be a moment of emotional development turns into a silly fishing contest. Pixar turned us all to mush at the end of Toy Story 3 (admit it, you cried), but Brave’s ’emotional’ scenes aren’t nearly as satisfying.

When the slapstick is stripped away, you’re left with a lead whose most notable traits are her (albeit beautifully animated) hair and her archery skills, and a mother-daughter relationship that lacks any real depth despite being the focus of the film. There are animals, magic, fun accents and bare behinds (in 3D no less) to keep the PG audience entertained. But for anyone over the age of 12, all the film offers is lovely scenery and a few giggles.

Brave, a Disney Pixar release, is rated PG for some action and rude humor. It gets a wide release Friday, June 22. Click here for local showtimes and tickets.