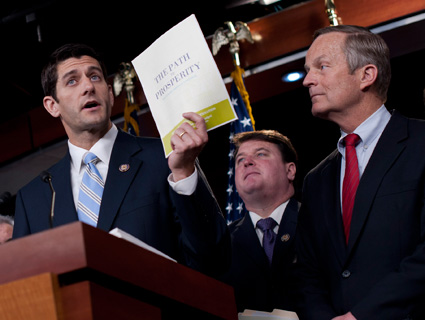 On Sunday, Rep. Todd Akin (R-Mo.), who is challenging Sen. Claire McCaskill in the Missouri Senate race, used an interview with a local television station to defend his belief that abortion should be illegal even in cases of rape: He claimed that women who are the victims of “legitimate rape” are unlikely to become pregnant. Akin said that the female body has “biological defenses” that prevent rape victims from getting pregnant. (That’s not true.) The implication of his position is that if you were raped and became pregnant, you must have actually wanted it—it wasn’t really rape.

This isn’t the first time Akin has expressed fringe views about rape in the context of the abortion debate. Last year, Akin, vice presidential candidate Paul Ryan (R-Wis.), and most of the House GOP cosponsored a bill that would have narrowed the already-narrow exceptions to the laws banning federal funding for abortion—from all cases of rape to cases of “forcible rape.”

Drugged, raped, and pregnant? Too bad, says the House GOP.

After I reported on the “forcible rape” language in January 2011, a wave of outcry from abortion rights, progressive, and women’s groups led the Republicans to remove it. But a few months later, in a congressional committee report, Republicans wrote that they believed the bill would continue to have the same effect despite the absence of the “forcible” language.

So why was the “forcible” language so important? Pro-life advocates believed they needed to include the word “forcible” in the law to preempt what National Right to Life Committee lobbyist Doug Johnson called a “brazen” effort by Planned Parenthood and other groups to obtain federal funding for abortions for any teenager by (falsely) claiming statutory rape. Abortion rights groups, Johnson warned, wanted to “federally fund the abortion of tens of thousands of healthy babies of healthy moms, based solely on the age of their mothers.” Richard Doerflinger, the US Conference of Catholic Bishops’* top anti-abortion lobbyist, echoed Johnson in congressional testimony, arguing that the “forcible” language was “an effort on the part of the sponsors to prevent the opening of a very broad loophole for federally funded abortions for any teenager.” Planned Parenthood flatly denied having a plan to open up such a loophole.

The idea that women who are “legitimate” rape victims can’t get pregnant has currency in some corners of the fringe right. Akin embraces it. Does he embrace the conspiracy theory about the need for the “forcible rape” language, too?

*The name of the organization has been corrected.