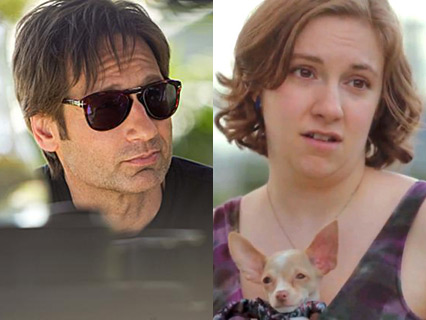 When it premiered last April, the series marked a new low for the premium cable network, even managing to surpass John From Cincinnati in its level of galling unwatchability. The inaugural season was practically drowned in its commitment to a mumblecore-hued comic universe defined by limp execution, clumsy timing, and deafening familiarity. It was inertia disguised as quirkiness, stock narrative masquerading as bold art, and peskiness paraded as high comedy.

Season 2 premieres on Sunday, ushering in another 10-episode, two-month reign of Girlsmageddon. And I’ll be the first to admit there’s been a noticeable improvement: Girls season 2 is definitely less of a crime against humanity than Girls season 1. But the modest boost in quality is nothing to write home about.

In the first four episodes, we find that some things have changed, but most have stayed exactly the same—preserved by the emotional permafrost of twentysomething New Yorkers.

Aspiring writer Hannah (played by series creator Dunham) is still struggling to sell her work, but at least she has a steady day job now. Marnie (Allison Williams, one of the show’s few redeeming assets), is still her levelheaded and patient friend, but she begins this season without a boyfriend and without a job. Jessa (Jemima Kirke), the promiscuous, free-spirited Brit who thinks conventional dating is “for lesbians,” is now a married promiscuous, free-spirited Brit who thinks conventional dating is for lesbians. And Shoshanna (a sporadically hilarious Zosia Mamet), remains the twitchy and shy one, even after her v-card has been so tenderly revoked. The extraordinarily talented Donald Glover (of Community fame) shows up for a while to play Sandy, the liberal Hannah’s new black Republican boyfriend. But the awkward tension and blindingly obvious jabs drawn from this scenario never rise above a short-lived gimmick.

Beyond that, there isn’t much to say that wasn’t already said a year ago. The series sustains its somnolent portrayals of unattractive sex, recreational drug use, and youthful uncertainty. The slight improvement this year around can be credited entirely to the fact that everyone seems a little less swathed in 21st century, Ikea-grade ennui. This does make the show easier to hate-watch. But Dunham and Co. continue to be at the upper echelons of taking aimless comedy to its logical, scarcely sympathetic extreme. There’s a moment in one of this season’s early episodes where Sandy finally tells Hannah how he feels about her writing. His assessment isn’t particularly generous: “It feels like it’s waiting in line…and all the nonsense that goes through your brain,” he confesses to a irked and passive-aggressive Hannah. “It didn’t feel like anything…happens…It was really well-written, though!”

An apt description for the series itself—well, minus the “well-written” claptrap.

And speaking of claptrap…

…the sixth season of Showtime’s Californication also premieres Sunday night—at 10:30, just an hour and a half after Girls! If for whatever ungodly and incomprehensible reason you still follow this series (I stopped tuning in regularly right when Rob Lowe started scatting like a damn fool), rest assured that you still get to see David Duchovny chain-smoke, deploy salty language, and be the object of lust of mobs of nameless women.

The tagline for this season is “Hank enters a new stage.” No. No, he doesn’t. Drunkard scribe Hank Moody (a now even more bored-looking Duchovny) has shipped off to rehab for a short while, but he’s still the same old swirl of self-destruction and acute immaturity. The show continues to glorify Hank as a (supposedly) brilliant, hedonistic novelist who combines within him the horniest elements of both Bret Easton Ellis and Axl Rose. This year, Hank The Rock-Star Author once again dabbles in the actual rock-star lifestyle, this time with an idiotic British cock-rocker who wants to turn one of his novels into a Broadway musical. This sets the stage for Hank to engage in some more dreadfully crude activity, such as vomiting on a pile of cocaine, and incessantly spout graphic phrases like “injecting narcotics into my taint.”

This is all about as amusing as listening to someone jackhammer a sidewalk while you’re trying to take a nap. The return of Californication marks a roaring return of the excessively tiresome to cable television. There was a time when Tom Kapinos‘ vulgar dramedy was a welcome addition to the Showtime family. And that time passed when George Bush was still in the White House. “You used to be such a good drunk,” Becca (Madeleine Martin), Hank’s brooding teen daughter, informs her depressed and hungover father. “Now you’re…just bloated…and smelly.” Ditto the show.

For the worse, virtually nothing changes about the series (the stereotypes, the archetypes, the forced edginess, the deaf comic ear), and what has changed isn’t worth anybody’s time of day. In that sense, it is only fitting that it premieres that same night as round 2 of The Lena Dunham Horror Show. So go ahead and pick your poison, if you must.

(And stay tuned, because I hear the young women of Mother Jones are writing up their own competing review of Girls, to be published this weekend. UPDATE: Here it is.)

Click here for more TV and movie features and here to read more of Asawin’s reviews.