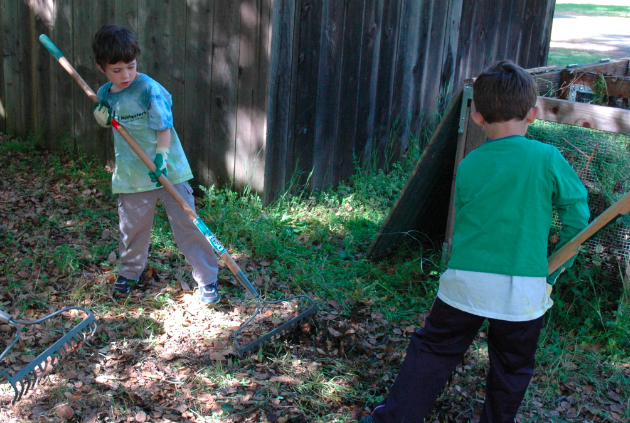 The Boy Scouts of America, which discriminates against gay Scouts, atheists, and families who want to put their sons and daughters in the same scouting program, has seen its membership plummet in the last decade. Many former Scouts have left scouting altogether. But a number of families fed up with BSA policies have found Navigators USA—a small organization that “welcomes all people…no matter what gender, race, lifestyle, ability, religious or lack of religious belief” and has seen its chapters (comparable to Boy Scout troops) double in the last year.

“We knew the Boy Scouts excluded gays when we started, but we thought that was one of the old, outdated rules on its way off the books,” says Bryan Freed, whose family switched from the Boy Scouts to a Navigators chapter in Los Altos, California, after the Boy Scouts publicly reaffirmed their ban on gay Scouts and Scoutmasters in July 2012. “We told our 8-year-old son, Nathan, what we thought of the official BSA rule on excluding gays, and we let him decide.”

The Navigators originated from BSA Troop 103 in East Harlem, which was also the first troop in America that was started in a shelter serving homeless families. After the Supreme Court reaffirmed that the Boy Scouts could bar gay troop leaders in June, 2000, Navigators founder Robin Bossert, who was leading the Harlem troop at the time, said he stayed in the organization for three more years, “while I tried to see if it was going to be possible to change their policy from within.” When he realized this wasn’t going to happen, he pulled out of BSA and Troop 103 became Navigator Chapter 1. 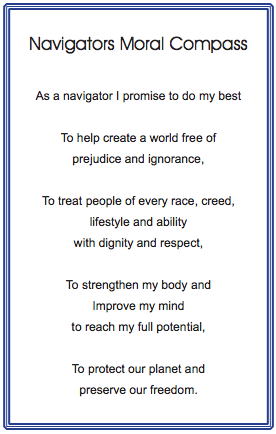 In March, 2012, the Navigators had 19 chapters, but today, there are about 45 chapters across 21 states, according to Tony Porterfield, a chapter leader in Los Altos. Bossert adds that they are growing at a rate of about two chapters per month, with each chapter having an average of 8-12 children, so he estimates that there are up to 600 boys and girls enrolled in the program. For the most part, Navigators participate in the same kinds of activities that Boy Scouts do: camping, organic farming, hiking, tie-dying, excursions to museums, and community service. Freed says the only event his son misses from the Boy Scouts is the Pinewood Derby, where scouts build and race model cars. (Freed points out that “as a parent doing much of the work on it, I do not miss it.”)

But there is one big difference: the Navigators’ Moral Compass (left), which expresses the group’s philosophy that members shouldn’t be discriminated against over gender, religious beliefs, or sexual orientation. Bossert says the organization has openly gay chapter leaders, as well as board leaders and co-members.

“We wanted our two sons to take part in scouting [and] we wanted to do that within an organization that reflects our family’s values,” says Porterfield. “Inclusiveness and respect for others is part of the Navigators program and something we discuss directly with our children.”

Porterfield, who was a Cub Scout as a boy, notes that in the Navigators, LGBT issues are covered in age-appropriate language, with the conversation focusing on the importance of treating everyone with respect. When Freed asked his son which organization he wanted to join, he says he phrased the question like this: “Gay people are men who want to marry men, or women who want to marry women. Most families have one mommy and one daddy, but that is not always the case. And the Boy Scouts do not let gay people join their group.”

There are other alternative organizations to the Boy Scouts, both faith-based and secular, but the Navigators are among the biggest. They nonetheless still have a long way to go before catching up with the Boy Scouts numbers: Deron Smith, spokesman for the Boy Scouts, tells Mother Jones that there are about 2.6 million members (there were 2.7 million members in 2012, and 2.8 million in 2011.) Since 1999, membership to the Boy Scouts has declined by about a third. In the last year, the Boy Scouts have also faced dropped funders, angry pop stars, and most recently, a California bill that would make the organization ineligible for tax breaks because of its discriminatory policy against gay members. The organization will vote on whether to overturn its ban on gay members in May, but even if the ban is overturned, individual troops will still be able to discriminate.

“We can’t discuss other organizations,” says Deron in response to a question about whether participants unhappy with the ban should choose the Navigators over the Boy Scouts. But he adds that BSA aims to “create an environment where people who may disagree on a variety of topics can still work together to achieve life-changing benefits to youth through its program.”

“I’m skeptical that any other organization can replace the century of tradition and refinement that the BSA has enjoyed,” adds Zach Wahls, an Eagle Scout raised by two lesbian mothers, and founder of Scouts for Equality, which is advocating for the Boy Scouts to lift its gay ban. “We’d prefer that the BSA return to its core values of mutual respect and religious freedom, but fully understand that other folks don’t want to wait.”