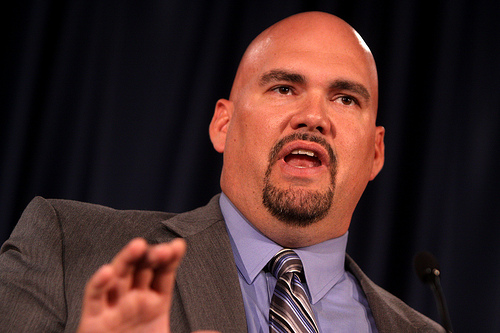 A few days before the 2012 Iowa presidential caucuses, Kent Sorenson, an influential Republican state senator in Iowa, caused a stir by cutting ties with Rep. Michele Bachmann (R-Minn.) and endorsing libertarian Rep. Ron Paul (R-Texas). “The decision I am making today is one of the most difficult I have made in my life,” Sorenson said. “But given what’s at stake for our country, I have decided I must take this action.”

Making Sorenson’s decision a lot easier was, allegedly, the offer of a whole lot of cash.

According to an October 2011 email obtained by the Center for Responsive Politics (CRP), an ally of Sorenson’s allegedly told Ron Paul’s campaign that they could have Sorenson’s full support in exchange for an $8,000-a-month salary for Sorenson, $5,000-a-month salary for an acolyte of Sorenson’s, and $100,000 in contributions to a political action committee run by Sorenson. (It remains unclear how much, if any, money actually changed hands. Iowa campaign finance filings contain no record of a $100,000 donation to Sorenson’s Iowa Conservatives Fund PAC.)

In exchange, the email says, Sorenson would ditch Bachmann’s campaign, endorse Paul, join Paul on the campaign trail in Iowa, and provide Paul’s campaign with a member list of the “main Iowa home-school group” for “targeted home-school mail.” The bombshell email was allegedly written by Aaron Dorr, who runs Iowa Gun Owners, and is addressed to John Tate, Paul’s 2012 campaign manager. An aide to Paul’s 2008 presidential campaign, Dennis Fusaro, gave the email to CRP, which you can read below:

The lengthy memo sent on Oct. 29, 2011, was addressed to John Tate, who was then the Ron Paul 2012 campaign manager, Dorr not only lays out Sorenson’s alleged requests for money and what he will do in return, but says that because of a major Iowa Senate leadership meeting coming up on Nov. 10, Sorenson couldn’t quit the Bachmann campaign until Nov. 11. In a second email chain Fusaro provided, Benton emails Dorr on Nov. 14, writing that, “with those meetings in the rear-view mirror, I though (sic) now might be a good time to revisit Kent and your brother joining our team.”

On Nov. 21, Dorr replied to Benton and Tate that he was going to step out of the negotiations because Dimitri Kesari, a Ron Paul staffer, had gone to Sorenson’s house for dinner.

“As I’m no longer needed to facilitate a conversation at this point, I’ll bow out and let you, John, Dimitri, and Kent work this out,” Dorr wrote.

Kasari, Tate, Dorr and Benton did not return calls and emails for comment. Today, The Iowa Republican, a conservative blog in Iowa, published an audio recording of what is alleged to be a conversation between Fusaro and Sorenson in which the senator tells Fusaro that Kasari gave his wife a $30,000 check from an account belonging to a jewelry store Kasari’s wife owns. In the recording Sorenson said he did not cash the check.

In response, Sorenson told TheIowaRepublican.com, which also reported on the alleged Sorenson-Paul arrangement, that Fusaro had fabricated the email and that he’d never received any money. The other players implicated in this alleged pay-to-play deal did not comment to CRP. If true, this scheme is yet another headache for Sorenson. He is currently under investigation by a state ethics committee for allegedly pledging his support to Bachmann’s campaign in return for renumeration, and he has denied any wrongdoing in that matter, too.