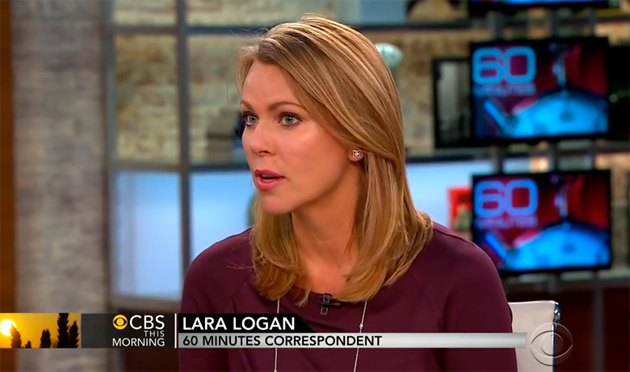 It’s not surprising that CBS News today announced that 60 Minutes correspondent Lara Logan and her producer Max McClellan were taking (or being forced to accept?) leaves of absence after an internal review confirmed the obvious: they had botched their now infamous Benghazi report and helped perpetuate a hoax crafted by Dylan Davies, a security consultant who claimed he had been at the compound the night of the attack.

The review’s summary findings—which you can read here—note that the contradictions between the account Davies was peddling in public (via a book) and the information he provided to the FBI and the State Department were “knowable” prior to the airing of Logan’s report. Logan and McClellan, the review found, “did not sufficiently vet Davies’ account of his own actions and whereabouts that night.” No kidding. And the report suggests that Logan was driven by both a desire to find something new in a story already much covered and her belief that the Obama administration was misrepresenting the threat posed by Al Qaeda. This is damning: she failed to do a basic task of reporting and she might have had an agenda.

The review does not answer all the questions that popped up following the 60 Minutes report, especially this one: why the hell did CBS News continue to defend this story after evidence emerged that Davies had fabricated his tale? The summary findings note:

After the story aired, the Washington Post reported the existence of a so-called “incident report” that had been prepared by Davies for Blue Mountain in which he reportedly said he spent most of the night at his villa, and had not gone to the hospital or the mission compound. Reached by phone, Davies told the 60 Minutes team that he had not written the incident report, disavowed any knowledge of it, and insisted that the account he gave 60 Minutes was word for word what he had told the FBI. Based on that information and the strong conviction expressed by the team about their story, [CBS News chairman and 60 Minutes executive producer] Jeff Fager defended the story and the reporting to the press.

Hold on. One of the best newspapers in the world reports the existence of documentary evidence that blows the credibility of your super-duper source out of the water, and what do you do? You call the source and ask him if he told you the truth? When the source insists that he did, you take his word and stick to the story? This does not seem like best practices. The Post report should have triggered a five-alarm alert within CBS News. But this much-storied media institution seemingly brushed it aside. It was only after The New York Times told CBS News that it had discovered that Davies’ account did not match what he had told the FBI that 60 Minutes kicked into action:

Within hours, CBS News was able to confirm that in the FBI’s account of their interview, Davies was not at the hospital or the mission compound the night of the attack. 60 Minutes announced that a correction would be made, that the broadcast had been misled, and that it was a mistake to include Davies in the story.

In other words, the Times had to do CBS News’ own job.

That might be the most embarrassing aspect of this episode. Logan and McClellan screwed up big time—and their motivations are fair game. But CBS News hung on to the Davies fiction after there was reason to suspect the network had been fooled and exploited. (The right-wing Benghazi truthers—this means you, Sen. Lindsey Graham—had jumped on the 60 Minutes report like fleas to a dog.) Did the brass at CBS News calculate that the network could ride out the storm? If so, they were thinking like political spinmeisters, not news people. That’s a blemish that won’t fade soon.