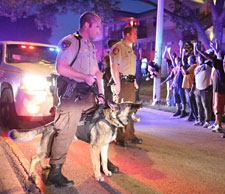 Below is a visual timeline detailing the events of August 9, from the time a Ferguson police officer shot and killed 18-year-old Michael Brown until about 10 p.m. that night, when a group of police vehicles departed from the neighborhood. Details are drawn from this New York Times report, Mother Jones interviews with a police spokesman and other sources, and content shared via Twitter by locals on the scene that day. The latter included Thee Pharoah, a local rapper who witnessed the shooting; KMOV, a local TV news station; and Antonio French, a St. Louis alderman. (Note: Time stamps in the tweets below reflect the reader’s time zone and may appear inaccurate; our bolded annotations accurately show events on Central Time.)

Saturday, August 9, 12:01 p.m.: Michael Brown and a friend, Dorian Johnson, are walking in the street on Canfield Drive when they are confronted by Ferguson Police Officer Darren Wilson.

Around 12:03 p.m.: After an altercation whose circumstances remain under investigation, Wilson kills Brown, firing at least six gun shots.

I JUST SAW SOMEONE DIE OMFG

12:07 p.m.: The Ferguson police notify the St. Louis County police about Brown’s death and ask them to take over the investigation.

12:10 p.m.: A paramedic on the scene determines Brown’s body has “injuries incompatible with life.”

@TheePharoah why did they shoot him?

@_amourlace no reason! He was running!

12:15 p.m.: St. Louis County patrol officers arrive to help maintain the crime scene. This video by Law Abiding Citizen News shows a crowd beginning to gather as a sheet from an ambulance is used to cover Brown’s body.

@SLIKK_DARKO bruh, the news hella not here. Everybody trying to get them here tho

Post by KMOV.
Around 1:30 p.m.: St. Louis County detectives and additional police from multiple agencies arrive on the scene. 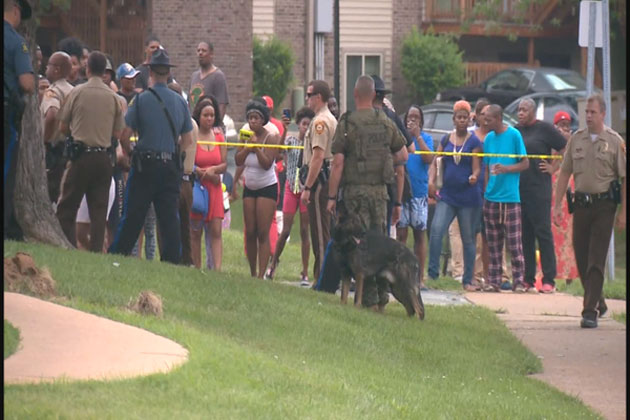 Early afternoon: News reporters interview Johnson, Brown’s friend who had been walking with him in the street. A little after two minutes into this video clip, Brown’s mother, Lesley McSpadden, can be seen outside the police tape, distraught that the police will not let her approach her son’s body.

Afternoon: News reporters interview McSpadden. She says, “You took my son away from me. You know how hard it was for me to get him to stay in school and graduate?”

Around 2:30 p.m.: A forensic examiner from the St. Louis County Medical Examiner’s office arrives to gather evidence for Brown’s autopsy.

Mid-afternoon: As the crowd on Canfield Drive grows, gunshots are reportedly heard close by. Officers on the scene call a Code 1000, summoning additional police in nearby areas to help control the crowd.

Around 4 p.m.: The medical examiner covers Brown’s body with a tarp and it is loaded into an SUV.

4:37 p.m.: Brown’s body is checked into the morgue in Berkeley, Missouri, about six miles from where Brown was shot. 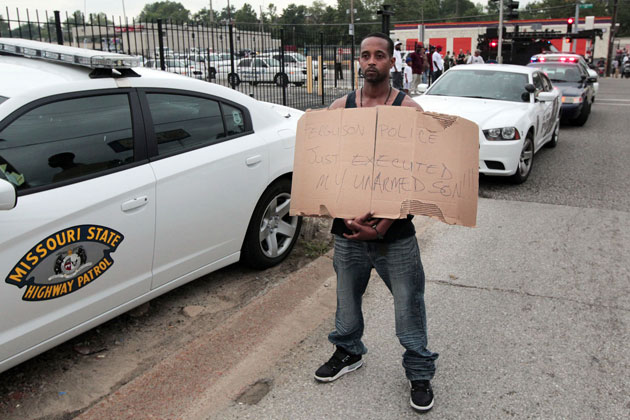 Police from several jurisdictions have formed a line to separate the crowd from the crime scene. pic.twitter.com/QJI0dBgVHm

Police have removed the tape. People are now free to walk down the street where the young man was killed. pic.twitter.com/kRn3NGIxAw

Around 7 p.m.: McSpadden and supporters create a memorial with flowers and candles on the spot where her son was killed. 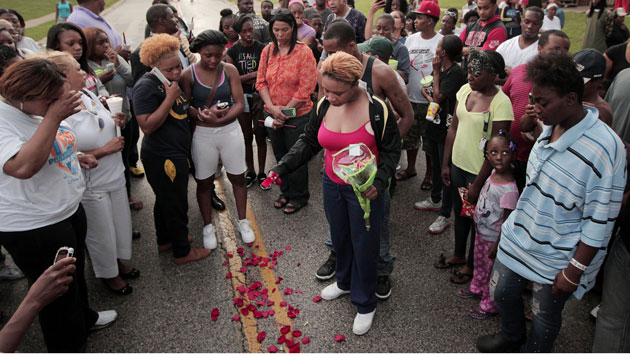 People marching to the #Ferguson Police Dept headquarters following the killing of a 17-year-old boy. pic.twitter.com/ROvs3mXYMM

8:25 p.m.: A fire truck responds to a dumpster fire on Canfield Drive. A crowd begins to taunt two police officers keeping watch over the operation from on top of the fire truck. The police call for backup.

People are gathering at the site where #Ferguson police killed 17-year-old #MikeBrown. Police have swarmed the area. pic.twitter.com/NlqbthTiAc

8:30 p.m.: A small crowd gathers around the Mike Brown memorial.

Rose petals and candles have been placed in the street where #MikeBrown‘s body laid. #Ferguson pic.twitter.com/kCn4dHqNwQ

8:36 p.m.: When another police car arrives, a crowd walks into the street, prompting the car to turn around.

The crowd has forced the police car to reverse. #ferguson https://t.co/B9YqGhq0hZ

8:41 p.m.: Police vehicles flood down Canfield Drive from West Florissant Avenue, including K-9 units. Officers face off with the crowd, but they do not order the crowd to disperse, according to French.

They’ve brought the dogs out in #Ferguson https://t.co/gXQeLtaXjt

Ferguson Police have dogs and shotguns. The unarmed crowd is raising their hands. https://t.co/1YvPC8QKQy

Things are getting very tense in #Ferguson. https://t.co/2pDUHAR2B7

9:02 p.m.: Police vehicles have crushed the memorial in the middle of the street.

Police cars trampled the rose petals and candles at the memorial for #MikeBrown. pic.twitter.com/nb2fQSrkMX

9:50 p.m.: The police leave and the neighborhood quiets down—but days and nights of turmoil in Ferguson are on the way.

Police are leaving. The crowd is cheering. https://t.co/WStMUxOwpB

Clarification: A reader pointed out that the video clip we initially used of Brown’s body being covered contained audio from another recording; we replaced it with another clip.