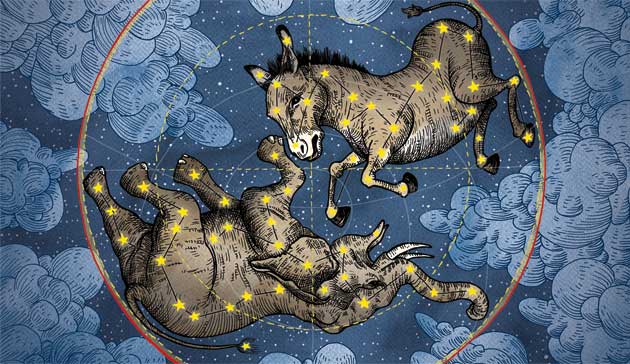 For ages, people have looked to the heavens to understand the strange doings of their earthly leaders. In that spirit, we divined the star sign of every member of Congress and then contacted Nick Dagan Best, a Montreal-based astrologer and the author of URANU.S.A.—”a graphic nonfiction astrology novel”—who has studied Washington’s “astrological dynamic” past and present. (For instance, an infamous 1856 incident in which a congressman severely beat Sen. Charles Sumner on the Senate floor can be explained by Mars being in retrograde, a time of heightened tension.)

Pluto, which has retained its astrological power despite being delisted as a planet, is in Capricorn right now and will be until 2023. That means we can expect big things from Capricorn Sens. Rand Paul and Ted Cruz, says Best. Younger senators with air signs are also rising. Best likes the prospects of Minnesota Democrat Amy Klobuchar and Republicans Marco Rubio and Mike Lee, all Geminis. Rep. Paul Ryan and Sen. Tammy Baldwin are also primed to have lasting impact. “It’s not just that they’re Aquarians,” Best says. “They’re the right kind of Aquarians.”

What about Barack Obama, one of only four Leos to ever occupy the White House? “The typical Leo failing is that they really want to make everybody happy,” Best explains. “That becomes kind of an obsession.” But he foresees bright times for the president if he hangs tough through the midterms. “In 2015, people are going to be saying his name and chanting the slogans again.” Beat that, Nate Silver.