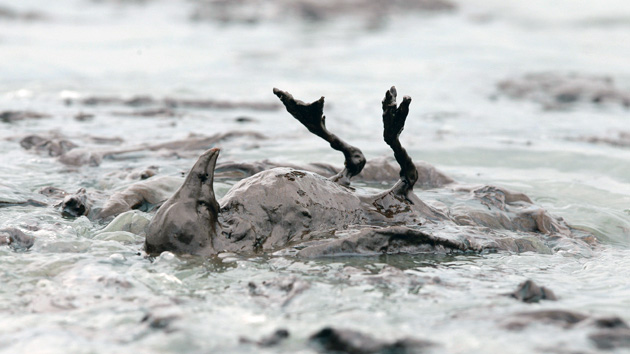 News of this morning’s federal court decision against BP broke as I was aboard a 40-foot oyster boat in the Louisiana delta, just off the coast of Empire, a suburb of New Orleans.

The reaction: stunned silence. Then a bit of optimism.

“This is huge,” said John Tesvich, chair of the Louisiana Oyster Task Force, his industry’s main lobby group in the state. “They are going to have to pay a lot more.” Standing on his boat, the “Croatian Pride,” en route to survey oyster farms, he added: “We want to see justice. We hope that this money goes to helping cure some of the environmental issues in this state.”

On Thursday, a federal judge in New Orleans found that the 2010 Gulf of Mexico disaster—in which the Deepwater Horizon oil rig exploded, killing 11 people and spilling millions of barrels of oil into the Gulf—was caused by BP’s “willful misconduct” and “gross negligence.”

Tesvich says he’s seen a drastic decline in his company’s oyster production since then—company profits down 15 to 20 percent and oyster yields slashed by 30 percent. He says he’s suspicious that this new decision will force the kind of action from local politicians needed to clean up the Gulf once-and-for-all. The politicians in Louisiana, he says, “haven’t been the best environmental stewards.”

BP’s own reaction to the news has been fast and pointed. “BP strongly disagrees with the decision?,” the company said in a statement on Thursday, published to its website. “BP believes that an impartial view of the record does not support the erroneous conclusion reached by the District Court.”

The company said it would immediately appeal the decision.

“It’s clear that the apocalypse forecast did not come to pass,” said a BP official.

With the fourth anniversary of the busted well’s final sealing coming up in a couple weeks, BP has been pushing back aggressively against the company’s critics. On Wednesday night—just hours before the court’s ruling—Geoff Morrell, the company’s vice president of US communications, spoke in New Orleans at the Society of Environmental Journalists conference, and blamed the media and activists for BP’s rough ride.

“It’s clear that the apocalypse forecast did not come to pass,” he said. “The environmental impacts of the spill were not as far-reaching or long-lasting as many predicted.”

Back in 2010, BP’s then-CEO Tony Hayward lamented—a month after the explosion—that he wanted his “life back.” He didn’t find much sympathy at the time. Within a couple months, he resigned out of the spotlight (with a $930,000 petroleum parachute). But his flub didn’t retire so easily, and it became emblematic of BP’s astonishing capacity for tone-deafness, something Morrell seemed intent on continuing Wednesday.

Morrell said that while “impolitic” remarks had been made by BP officials in the past, the spill’s aftermath has been “tough on all of us.”

I can only imagine.

I can faithfully report that no rotten tomatoes were hurled during Morrell’s talk, and grumbles and cynical chuckles were kept to a polite murmur. But the response on Twitter was more free-flowing:

Now BP spox is arguing that @NOAA tuna study published in PNAS was not applicable because it was done in a lab. #SEJ2014

BP guy: “We should not be accountable for damaged caused by others or conjured by advocacy groups” #SEJ2014

Yup, that last one is true.