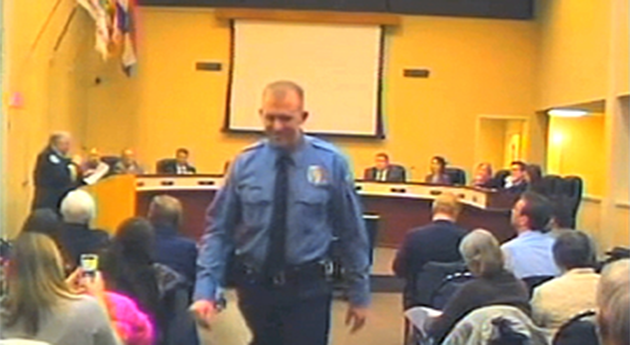 Wilson at a City Council meeting in February 2014.City of Ferguson/AP

Grand jury decides not to indict: The grand jury reviewing Ferguson police officer Darren Wilson’s case in St. Louis County announced on Monday night that Wilson will not be charged in the shooting death of Michael Brown. The decision came more than three months after Wilson shot and killed Brown, the unarmed black teenager whose death on August 9 triggered weeks of protests that included sporadic violence and looting.

Restricted air space: The Federal Aviation Administration confirms to Mother Jones that it restricted air space over Ferguson at 10:15 p.m. local time “due to gunfire.” The resrtiction was in effect from the surface to 3,000 feet above sea level (about 2,500 feet off the ground), so that’s why some news feeds were still working above the area.

President Obama reacts: Shortly after 10pm Eastern time, the president spoke, urging a peaceful response to the news. “Michael Brown’s parents have lost more than anyone. We should be honoring their wishes.”

More reactions: Some reactions from around the Ferguson area:

#Ferguson: What may become an iconic moment. One man stands with his hands up blocking armored vehicles. @ksdknews pic.twitter.com/ieOIQVooNu

Several fires pop up: Multiple reports of fires started to roll in. Here are just a couple.

Real-time footage: Watch a livestream from the streets of Ferguson captured by Bassem Masri here: