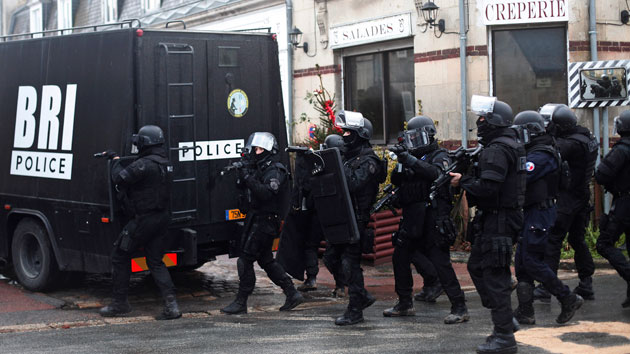 In the wake of last week’s terrorist attacks in Paris, information has slowly emerged about the attackers, their alleged affiliations with Al Qaeda in the Arabian Peninsula and the Islamic State, and their path to radicalization. But many unanswered questions remain. Here are some key unknowns:

Is a “third suspect” in the Charlie Hebdo shootings still at large?
Following the massacre at the Paris offices of Charlie Hebdo, police were initially searching for three suspects. Two of them were Cherif and Said Kouachi, who were ultimately killed in a dramatic shootout with French police. The third suspect was Cherif Kouachi’s brother-in-law, 18-year-old Mourad Hamyd, initially identified as the getaway driver who spirited the brothers away after the attack. It turned out, however, that Hamyd was never there. He turned himself into the authorities after seeing his name plastered all over the news and was eventually released from police custody last Friday, two days after the Charlie Hebdo shootings took place. Hamyd says he still has no idea why police targeted him, though some media outlets have reported that the cops got his name from an ID card discovered in the attackers’ abandoned getaway car. Left unresolved is the question of whether there was in fact a third suspect who drove the getaway vehicle, as some eyewitnesses to the attack reported. (Eyewitness reports can often be unreliable.) Currently, French authorities are pursuing at least six possible accomplices to the attacks, including Hayat Boumeddiene; she is the common-law wife of Amidy Coulibaly, who killed a French policewoman and massacred four people in a kosher grocery story before he was gunned down by police.

To what degree were Al Qaeda in the Arabian Penninsula and/or ISIS involved in orchestrating the attacks?
The Kouachi brothers said they were acting on behalf of Al Qaeda in the Arabian Peninsula, while Coulibaly declared himself a foot soldier of the so-called Islamic State. But these claims have perplexed some terrorism experts, who have noted that AQAP and ISIS are rivals who have not been known to coordinate their activities.

According to witnesses, the Kouachi brothers shouted during the shooting at Charlie Hebdo‘s offices, “Tell the media it is Al Qaeda in Yemen.” Cherif Kouachi also told a local news station that he and his brother were working for AQAP. And some evidence has emerged pointing to the brothers’ connection to this terrorist outfit. A senior US official told the New York Times that Said Kouachi traveled to Yemen four years ago to train with the AQAP. Cherif Kouachi reportedly received training in Yemen as well. (According to a Yemeni official who spoke with the Washington Post, Said Kouachi has claimed that Anwar al-Awlaki underwrote his trip.) On Friday, an AQAP source provided The Intercept with a statement claiming responsibility for the attacks: “The leadership of #AQAP directed the operation, and they have chosen their target carefully as a revenge for the honor of Prophet,” it reads.

Still, the exact role AQAP played in the attacks remains unknown. Also murky is the alleged involvement of the Islamic State, for which Coulibaly claimed to be working. As the siege played out, Coulibaly called a local TV station and told a reporter that he was working for ISIS under instructions from the “caliphate.” Jihadist websites have released footage of Coulibaly pledging allegiance to the Islamic State. He claims in the video that he worked with the Kouachi brothers and paid them “a few thousand euros” for the attacks: “Some of this was done together and some of it alone, in order to have a greater impact,” he said.

The combination of allegiances amongst the attackers comes while the Islamic State battles with al Qaeda’s Syrian affiliate, Jabhat al Nusra. So how should we understand two AQAP linked brothers and an Islamic State fanboy coming together in Paris? The Kouachis and Coulibaly knew each other prior to the al Qaeda and Islamic State split. All were definitely inspired by a combination of both groups, but whether they were fully directed in all of their cumulative actions appears unlikely. A more appropriate way to think about the Hebdo plot and many others to come is “networked.”

Who is Hayat Boumeddiene, and what role did she play in the attacks?
Boumeddiene, Coulibaly’s common-law wife, reportedly exchanged 500 phone calls with the wife of one of the Kouachi brothers during 2014. Since the attacks, photos of Boumeddiene wielding crossbows and guns have surfaced, and she claimed online to have once met Osama bin Laden in Afghanistan, according to Le Monde. Police initially believed that she took part in the siege of the kosher grocery store with Coulibaly; after the hostage crisis ended, there were early reports that she had somehow escaped in the chaos that ensued after police raided the store and killed Coulibaly. But more recent reports suggest that Boumeddiene departed France before the attacks, traveling to Turkey en route to Syria. Footage emerged Monday of Boumeddiene going through passport control in Istanbul, where she was accompanied by a man who has been identified as Mehdi Sabri Belhoucine. French authorities are currently searching for both Boumeddiene and Belhoucine.

Could the French authorities have done more to prevent the attacks?
According to the New York Times and other media outlets, the Kouachi brothers and Coulibaly were well known to French intelligence and had all been under surveillance at some point over the last decade. So how were the attackers able to hatch a terrorist plot under the noses of French authorities? Prime Minister Manuel Valls has cited “cracks” in the surveillance of the men. And an American official told the New York Times that French intelligence had dropped its surveillance of the men to focus on other targets. It’s likely that more information about possible missteps in monitoring the Charlie Hebdo terrorists will emerge in the weeks ahead.