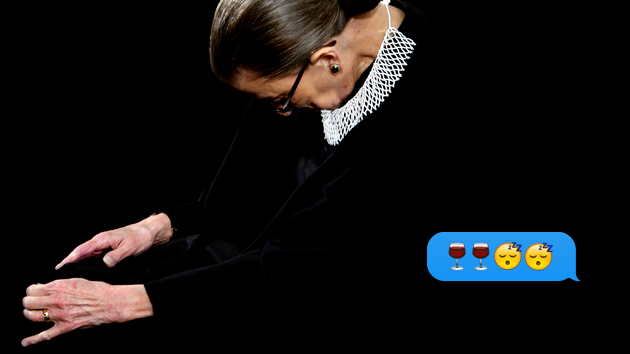 Contrary to earlier speculation that she had power-napped through last month’s State of the Union Address because it was just so damn dull, Supreme Court Justice Ruth Bader Ginsburg revealed on Thursday it was actually due to the fact she wasn’t exactly “100 percent sober.”

The audience for the most part is awake, because they’re bobbing up and down, and we sit there, stone-faced, sober judges. But we’re not, at least I wasn’t, 100 percent sober. Because before we went to the State of the Union, we had dinner together… Justice Kennedy brought in… it was an Opus something or other, very fine California wine, and I vowed this year, just sparkling water, stay away from the wine, but in the end, the dinner was so delicious, it needed wine.

According to Ginsburg, she was thankfully flanked by colleagues, who, like any good friends, casually nudged her awake when they noticed her dozing off. Watch below: