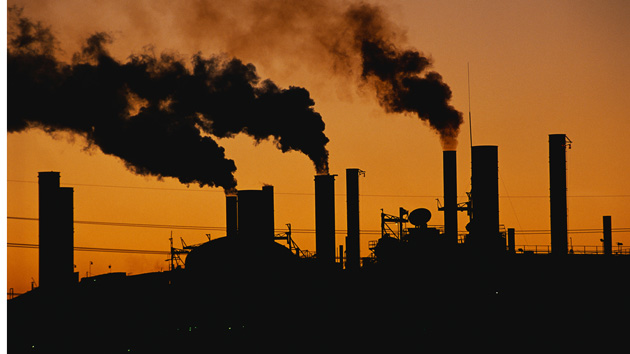 Nearly 44 percent of Americans live in areas with dangerous levels of ozone or particle pollution, according to the American Lung Association’s annual “State of the Air” report, published yesterday.

The good news is that’s actually an improvement over last year’s report, which showed that 47 percent of the population lived in these highly polluted places. Overall, the air has been getting cleaner since Congress enacted stricter regulations in the 1970s, and the American Lung Association report, which looked at data from 2011 through 2013, showed a continuing drop in the air emissions that create the six most widespread pollutants.

This year, short-term particle pollution was especially bad in the West, in part due to the drought and heat.

But don’t pat yourself on the back just yet. Many cities experienced a record number of days with high levels of particle pollution, a mixture of solid and liquid droplets in the air that have been linked to serious health problems. Short-term particle pollution was especially bad in the West, in part due to the drought and heat, which may have increased the dust, grass fires and wildfires. Six cities—San Francisco; Phoenix; Visalia, California; Reno, Nevada.; Yakima, Washington; and Fairbanks, Alaska—recorded their highest weighted average number of unhealthy particle pollution days since the American Lung Association started covering this metric in 2004.

Los Angeles held its rank as the metropolitan area with the worst ozone pollution, even as it saw its best three-year period since the first report 16 years ago: the city experienced a one-third reduction in its average number of unhealthy ozone days since the late 1990s.

Meanwhile, states on the east coast showed the most headway in cleaning up their air, with major drops in year-round particle pollution. The American Lung Association attributed the improvement to a push for cleaner diesel fleets and cleaner fuels in power plants.

“The progress is exactly what we want to see, but to see some areas having some of their worst episodes was unusual,” said Janice Nolen, an air pollution expert with the association, referring to the record-breaking days of short-term particle pollution.

Data is missing for some of the dirtiest cities in the Midwest, including Chicago and St. Louis, due in part to problems at data labs in Illinois and Tennessee. Similar problems in Georgia also prevented researchers from assessing changes in Atlanta, another city notorious for air pollution.

Outdoor air pollution has been linked to about 3.7 million premature deaths worldwide, by causing or exacerbating lung cancer, chronic obstructive lung disease, acute lower respiratory infections, ischaemic heart disease, and strokes. And unfortunately, it seems people of color and with low incomes are often exposed to the dirtiest air.

Using data from the Environmental Protection Agency, the American Lung Association ranked cities around the country in terms of their year-round particle pollution, or the annual average level of fine particles in the air. These fine particles can come from many sources, including power plants, wildfires, and vehicle emissions, and breathing them in over such long periods of time have been linked to lung damage, increased hospitalizations for asthma attacks, increased risk for lower birth weight and infant mortality, and increased risk of death from cardiovascular disease.

Here are the 10 cities with the lowest levels of year-round particle pollution:

And the cities with the most year-round particle pollution:

To see city rankings for short-term particle pollution and ozone pollution, check out the report.

Correction: An earlier version of this article misstated the state in which Visalia, Porterville, and Hanford are located.