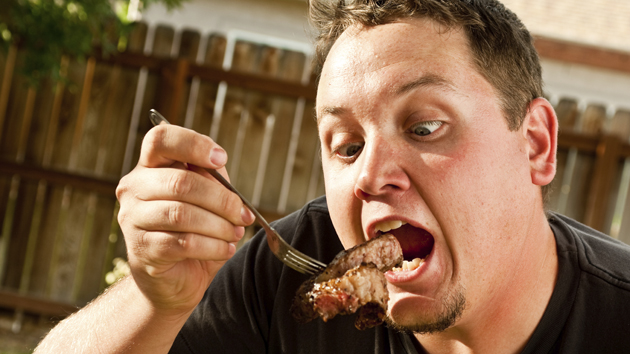 There are plenty of reasons to stop eating meat: Fears over growing numbers of terrifying superbugs that have sprung out of our antibiotic-ridden meat supply, objections to the horrifying conditions factory-farmed animals are subjected to, and concerns over health risks posed by meat consumption (for both people and the planet)—to name just a few.

Around 90 percent of people who eat meat say they do so for one or more of four reasons: It’s natural, necessary, normal, and nice.

Given all this, meat eaters increasingly find themselves having to defend their diet. Now, a team of international researchers has identified the four most common excuses they use. According to a report published last month in the behavior nutrition journal, Appetite, around 90 percent of people who eat meat use these “four Ns” to justify their diets:

The researchers conducted six separate studies to find out more about how the four Ns play a role in helping meat-eaters rationalize their diet and how their beliefs can tell us more about the behaviors that drive them.

They found that those who endorsed the four Ns the most strongly cared about fewer species of animals, were less likely to consider the moral implications of their food choices, and also showed less concern for issues not related to diet, like social inequality. The studies also showed that four-N advocates experience less guilt than responders who showed ambivalence—and that the more someone believes in the four Ns, the less willing he or she is to cut back on meat consumption in the future.

The authors point out that insights into these attitudes reveal more than just the “why” behind meat consumption; they highlight where there might be opportunities to change beliefs—and ultimately behaviors. Though researchers found that “necessary” and “nice” were the most strongly voiced defenses and might be most difficult to overturn, Americans are eating much less meat than they used to, and cultural movements like Meatless Monday have made it clear that people can at least be convinced to cut back. Plus it doesn’t hurt that vegetarian fare has come a long way in the tastiness department.