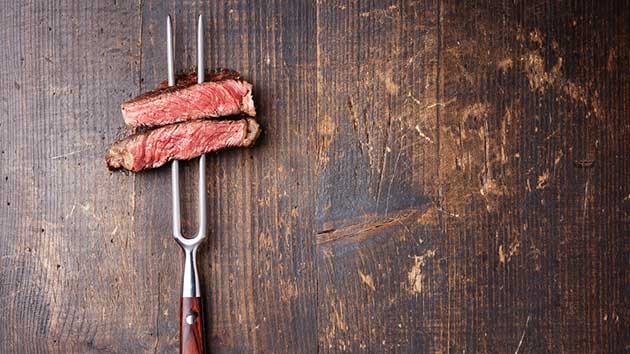 Every five years, the United States Departments of Agriculture (USDA) and Health and Human Services (HHS) get together to revise their recommendations about what Americans should eat. These guidelines influence doctors’ health advice, food labels, the ever evolving food pyramid-turned-plate, and what goes into school lunches. For instance, in 2010, a time when more than half of adults were overweight or obese, the agencies recommended things like drinking water instead of sugary beverages, filling half your plate with fruits and veggies, cutting sodium, and just eating less in general.

The meat vs. plants showdown: It probably comes as no surprise that Americans eat a diet lacking in fruits and vegetables and full of too many solid fats. In fact, vegetable consumption was on the decline between 2001 and 2010 even as each of us now eat 202.3 pounds of meat a year; a bit less red meat than a few years ago but more poultry than ever before. In the past, the government has warned against overdoing it with red meat and urged people to chow down on lean meats like chicken and fish instead. But this year, for the first time, the committee might caution against overconsumption of all kinds of meat—and not just for health reasons, but also because of meat’s environmental footprint. Livestock operations now produce 15 percent of the world’s carbon emissions. Eating fewer animal-based foods “is more health promoting and is associated with a lesser environmental impact,” the committee suggested in its draft report.

Which of course has ruffled the meat industry. Removing lean meat from healthy diet recommendations is “stunning,” read a recent statement by the North American Meat Institute. “The committee’s focus on sustainability is questionable because it is not within the committee’s expertise.”

Cholesterol is back: Your body makes its own cholesterol but you also get some when you eat animal fats, including eggs. Previous guidelines warned that too much of the waxy substance in the blood leads to higher risk of heart disease, and recommended that adults consume no more than 300 milligrams of cholesterol a day. But this year’s guidelines might downplay dietary cholesterol’s risk, marking the comeback of the daily omelet. The DGAC’s December meeting notes stated that “cholesterol is not considered a nutrient of concern for overconsumption.”

“Cholesterol is not considered a nutrient of concern for overconsumption.”

We’ve been cautioned against cholesterol in our diets for the last fifty years, ever since the American Heart Association warned about it in 1961, reports the Washington Post. But in late 2013, a task force including the AHA found “insufficient evidence” in studies it reviewed to warn most people against eating foods high in the substance, such as eggs, shellfish, and red meat.

Put down the soda: I repeat: Put down the soda. Americans consume way too much added sugar, 22 to 30 teaspoons a day by some estimates, or nearly four times the healthy limits proposed by the AHA. And sugar-sweetened drinks account for nearly half of these added sugars. As Mother Jones has reported over the years, these jolts of added sugar have been linked with obesity, diabetes, metabolic disease, and a whole host of other ailments.

The World Health Organization turned heads last year when it reduced its recommendation about healthy added sugar intake from roughly 12 teaspoons to around 6 teaspoons a day (aka less than one can of Coke). The Dietary Guidelines might not go that far, but this year the committee will likely propose limits on added sugar for the first time: No more than 10 percent of your daily energy should come from added sugar, the committee suggests, which comes out to about 12 teaspoons a day for an adult with an average BMI.

Not sure how we feel about salt: “Sodium is ubiquitous in the food supply,” noted the Committee in its December meeting notes. The 2010 Guidelines recommended that adults consume less than 2,300 milligrams of sodium a day, a far cry from the 3,400 mg we inhale on average. The Guidelines also suggested that certain at-risk groups like people over age 51 and diabetics should eat less than 1,500 mg a day.

But while a 2013 report by the Institute of Medicine stated that reducing sodium intake is important for heart health, it also pointed to recent research suggesting that “sodium intakes that are low may increase health risks—particularly in certain groups”—like people with diabetes or kidney disease. The report asserted that there’s no evidence of benefits in reducing sodium intake to 1,500 mg for these subgroups or for the general population. While the Committee seems to want to warn people off sodium-laden diets for the 2015 guidelines, given these mixed findings about levels it seems unlikely that it will set a new defined limit.