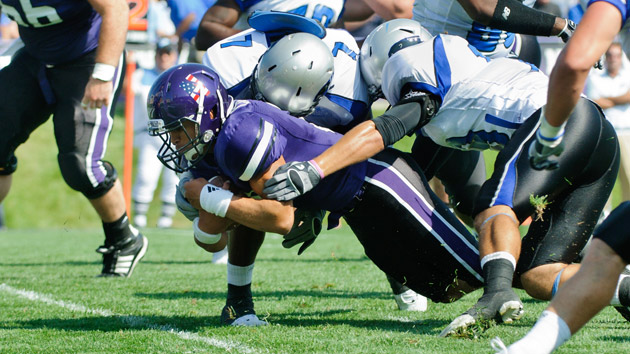 On Monday, a labor board decision put an end to the unionization bid by a group of Northwestern football players hoping to gain benefits through collective bargaining.

But the National Labor Relations Board’s move to dismiss the case by deferring judgment on narrow, jurisdictional grounds was, for some experts, a surprising result. Monday’s decision overturned a March 2014 ruling by a regional office that found college athletes could collectively bargain as university employees under federal labor law. With the decision, the votes, cast in a secret ballot last April, will be destroyed.

We spoke to Michael LeRoy, a University of Illinois law professor who focuses on labor issues, to figure out what’s next for college athletes after the NRLB’s decision. Here are four takeaways from the case:

The board punted on whether athletes are employees—and that shows how wide-reaching this case was: The crux of the NRLB’s decision came down to whether the athletes were considered university employees and therefore had the right to unionize. The board chose not to “assert jurisdiction,” meaning it would not make a decision in this particular case. Weighing in, the board argued, would “not serve to promote stability in labor relations.”

Instead, the NLRB noted that a union at Northwestern, the only private school in the Big Ten Conference, would’ve disrupted the structure of the NCAA, which is made up mostly of public universities outside the board’s jurisdiction. A decision to allow unionization at one private school would have given athletes there the chance to collectively bargain over employment benefits—and that, LeRoy argued, would have given Northwestern a competitive advantage in recruiting athletes over other teams.

The board “left the problem at the doorstep and didn’t even put it in the house for consideration,” LeRoy said. “My sense is that by common law, the players look a lot like employees. It’s beyond problematic to have only one school that can offer players pay and benefits, while all the other Division I schools are restricted by NCAA rules.”

Monday’s ruling ends unionization efforts at all private schools: While the decision focused on Northwestern’s case, the national board’s decision set a precedent for regional boards considering similar cases, LeRoy says. So if college athletes at, say, Notre Dame—one of the 17 other private schools in the NCAA’s big-time football division, the Football Bowl Subdivision—banded together and tried to form a union, their appeal would likely be denied.

“My sense is that by common law, the players look a lot like employees,” LeRoy said.

Still, as Michael McCann pointed out on SI.com, athletes at public institutions in more labor-friendly states could challenge the athletes-as-employees question before regional boards, which would make interpretations based on the state’s laws. (Legislators in Ohio and Michigan revised statutes after Northwestern’s petition was filed declaring that college athletes at state schools were not considered employees and therefore could not unionize.)

The College Athletes Players Association must switch things up: The board halted a much larger effort by the labor group to improve the athletes’ well-being through collective bargaining. CAPA could bring its case to a federal appeals court through a complicated legal process, but, as ESPN legal analyst Lester Munson noted, such an effort is unlikely to succeed. Instead, CAPA might try lobbying Congress to improve athletes benefits, as representatives did last March; organizing protests; or calling for an amendment to the National Labor Relations Act to include a definition for college athletes. (The latter is “highly improbable” to happen, LeRoy said.)

LeRoy says college athletes could also turn to antitrust litigation as a model for seeking damages in the future. NCAA members have for years debated whether to seek an antitrust exemption, handing over some power to the federal government in exchange for protection. “If you have an antitrust court rule that players are engaged in athletic labor and these rules are unduly restrictive, instead of bargaining for a wage, they can bargain for damages,” LeRoy said.

A landmark antitrust ruling last August found that the NCAA had violated federal law by not paying football and basketball players for their image and likeness. (The NCAA appealed the ruling.) A second antitrust case alleging that athletic scholarships wrongly limits player compensation, if won, could further challenge the NCAA’s view of college sports as the bastion of amateurism. “This is a setback for CAPA, but not at all an end to their efforts,” LeRoy added.

Conditions for college athletes are starting to improve: Buried on page six of the seven-page opinion, the NRLB acknowledges that recent calls for NCAA-wide reform have benefited college athletes. The organization’s recent decision to allow its five wealthiest conferences to award athletes four-year guaranteed scholarships, it notes, “has reduced the likelihood that scholarship players who become unable to play will lose their educational funding.” The NCAA also granted college athletes access to unlimited meals. And starting this fall, Pac-12 schools will be required to extend health benefits to former college players who suffered injuries on the field. (While the Pac-12 policy addresses a long-standing criticism over providing athletes health care coverage after their playing days are over, concerns linger regarding how each school will pay out those benefits in the coming years.)

“The NCAA woke up and paid attention to [the players’] concerns,” LeRoy said. “In some sense, CAPA and the Northwestern players have been pioneers. They’ve been successful, even though it didn’t come out the way they wanted.”