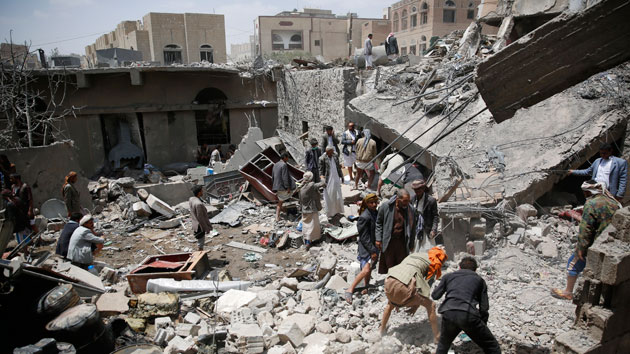 People search for survivors amid the rubble of houses destroyed in a Saudi-led air strike in Sanaa, Yemen, on September 21.AP Photo/Hani Mohammed

The nearly seven-month-old conflict, which pits Saudi Arabia and a coalition of allied states against anti-government rebels, has claimed thousands of civilian lives. More than two-thirds of those were killed by Saudi-led air strikes, according to the United Nations High Commissioner for Human Rights. While Saudi Arabia claims to only be targeting military targets, bombs have been dropped on power stations, water supplies, schools, hospitals, and a camp for displaced people.

The United States has been aiding the Saudi-led coalition with weaponry, logistics, and intelligence support. Washington and Riyadh inked $90 billion in arms deals between 2010 and 2014, and at least another $7.8 billion in new arms deals have been announced since Saudi Arabia’s air campaign began in March. Among the remnants of American-made bombs Amnesty International and Human Rights Watch have found on the ground in Yemen are two types of cluster bombs. Cluster bombs are banned by more than 100 countries because of the risk they pose to civilians.

The Amnesty report is the result of field investigations of 13 air strikes that hit Saada, Yemen, between May and July. Fifty-nine of the 100 civilians who died in the strikes were children. “The USA and other states exporting weapons to any of the parties to the Yemen conflict have a responsibility to ensure that the arms transfers they authorize are not facilitating serious violations of international humanitarian law,” said Donatella Rovera, Amnesty’s senior crisis response adviser, who led the investigation.

This video was released with the Amnesty report: