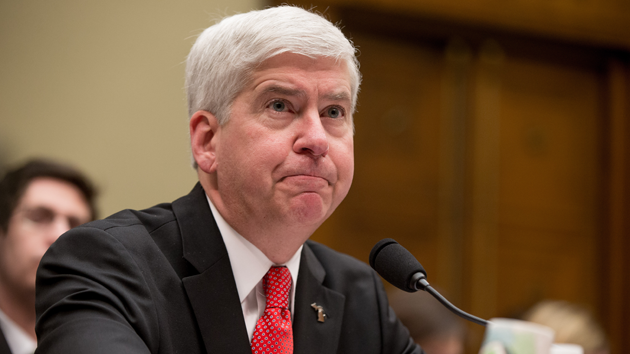 The hearing before the Republican-led House Oversight and Government Reform Committee quickly turned partisan. Democrats grilled the GOP governor over his claims that he didn’t know the water was contaminated. “Plausible deniability only works when it’s plausible,” said Rep. Matt Cartwright (D-Pa.). “You were not in a medically induced coma for a year.” Meanwhile, Republicans questioned why the EPA didn’t step in sooner. If the agency won’t act in emergencies, said committee chairman Rep. Jason Chaffetz (R-Utah), “why do we even need an EPA?”

Here are some highlights from today’s hearing:

Rep. Elijah Cummings: “If a corporate CEO did what Gov. Snyder’s administration has done, he would be hauled up on criminal charges.” Cummings, a Maryland congressman and the committee’s ranking Democrat, came down on Snyder in his opening testimony, critiquing the governor for running the state like a business. While “Republicans are desperately trying to blame everything on the EPA,” he noted, primary enforcement of the Safe Drinking Water Act falls on the state. “The governor’s fingerprints are all over this.”

Rep. Chaffetz to EPA chief: “Why do we even need an EPA?” Chaffetz and other house Republicans repeatedly pointed out that while Snyder has apologized for the crisis and fired officials who were involved, the EPA has not. When asked if the EPA did anything wrong, McCarthy repeatedly skirted the point, saying she wishes the agency were more aggressive. “You messed up 100,000 people’s lives!” Chaffetz said later. “And you take no responsibility.”

Rep. Cartwright to Snyder: “You were not in a medically induced coma for a year.” Cartwright, a former trial lawyer, ripped Snyder for ignoring the crisis. “I’ve had about enough of your false contrition and your phony apologies,” he said. “There you are dripping with guilt, but drawing your paycheck, hiring lawyers at the expense of the people, and doing your dead-level best to spread accountability to others and not being accountable.”

Rep. John Mica to EPA chief: “I heard calls for resignation—I think you should be at the top of the list.” Mica, a Florida Republican, pointed out that an EPA official wrote a memo in late spring of 2015 with concerns about lead contamination and questioned why the EPA didn’t respond more aggressively. “We were strong-armed,” McCarthy said. “We were misled. We were kept at arm’s length. We could not do our jobs effectively.”