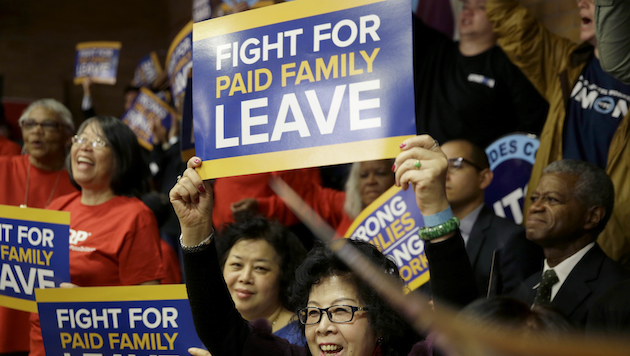 Last Thursday, New York passed a historic bill to mandate guaranteed paid family leave for nearly everyone who holds a job in the Empire State. The new policy—which follows in the footsteps of only four other states with similar programs—is by far the most generous paid family leave plan in the country, guaranteeing 12 weeks paid time off for both men and women, including for part-time and full-time employees.

By comparison, California and New Jersey guarantee only six weeks of paid time off. In Rhode Island, workers are guaranteed only four weeks of partial pay. (Washington approved a program in 2007 but it hasn’t gone into effect yet.)

New York’s new law, as Rebecca Traister in New York Magazine describes it, is truly revolutionary. At the moment, federal law only guarantees US workers job protection for up to 12 weeks, but fails to provide even a single hour of paid time off for parents who face the challenges of caring for a newborn child or a sick family member. Both Hillary Clinton and Sen. Bernie Sanders support changing the federal law to include such a paid leave mandate—but the issue faces a largely uphill battle due to Republican concerns of its potential damage to small businesses. Republicans also question how to fund such a federal program.

In New York, the program will go into effect starting in 2018 and will be paid for by paycheck deductions at 70 cents per week per every employee. That deduction will eventually go up to $1.40. The program comes as a major victory for Gov. Andrew Cuomo, who fought for its passage on Thursday well into the final hours of announcing the state’s annual budget, which also included a minimum wage hike to $15.

The benefit to men of the specifically outlined extension is also crucial, because it levels the playing field in the work-life balance debate and frees it from being an exclusively woman’s issue.

“No parent wants to not be able to be with their child enough to invest in them and watch them grow and have them recognize you—and need you and love you,” Anne-Marie Salughter said in a September interview with the Wharton School of Business. “That’s not a gender issue. That’s a parent issue.”

In the past year, tech giants such as Facebook and Apple have gotten ahead of the debate by offering robust parental leave programs that put the federal impasse to shame. Just last month, Etsy joined the progressive movement by offering all new parents up to six months of paid leave.

With New York the latest state to ensure paid leave for its employees—and far more generously than its predecessors—and the growing number of high-profile companies competing to best one another with the same, perhaps federal law will begin to slowly transform as well.