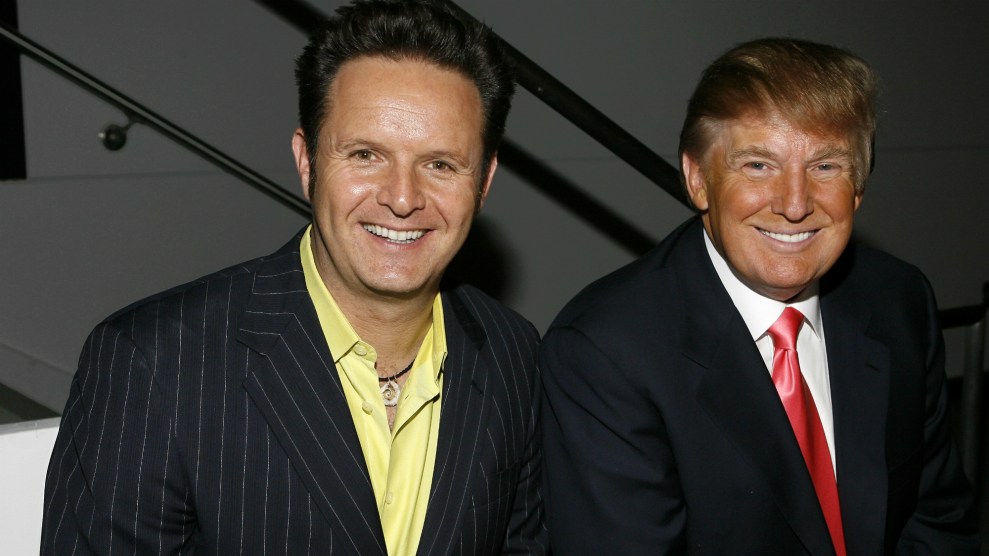 Two weeks ago, Mother Jones received a tip: Mark Burnett, the reality television king, was helping Donald Trump to spiff up the GOP convention. Two Republican consultants told us that Burnett, the British-born creator of Survivor, had been enlisted to work on various show-biz aspects of the Republican shindig. “He’s been in and out” of the convention planning, says a third Republican operative. “Not sure if he’s in the final.”

Burnett’s participation would make a certain sense, for he produced The Apprentice, the television show that turned Trump, the presumptive GOP nominee, into a small-screen star. Trump has talked publicly about staging the coming GOP gathering in Cleveland as an entertainment extravaganza. And Burnett sure knows how to create a television hit. He has produced The Voice, Shark Tank, and many other shows, including various awards shows.

Yet when Mother Jones contacted Burnett’s spokeswoman, she said that Burnett was not working on the convention where Trump will be crowned. She noted that she had checked with Burnett and that he was not involved. Then this week, the New York Post, citing one source, said that Burnett had indeed been recruited by Trump for the event and that the convention would present Melania Trump as the new Jackie Kennedy.

Following the New York Post article, Burnett’s rep checked again with the mega-producer and subsequently told Mother Jones that Burnett has nothing to do with the GOP convention.

Despite Burnett’s entertainment partnership with Trump, his participation in the convention would be surprising, for in recent years, he and wife, actress and producer Roma Downey, have been financial supporters of Democrats.

In 2008, Burnett and Downey each gave the maximum donation permissible to Barack Obama’s presidential campaign. After Obama won the White House, Burnett donated a hefty $30,400 to the Democratic National Committee. In the previous election cycle, Downey, who starred in the television show Touched by an Angel, supported John Kerry’s presidential bid. In 2013, Burnett gave $5,200 to Alison Grimes, a Democrat who was challenging Senate majority leader Mitch McConnell. Last September, Downey sent a donation to Kathleen Matthews, a Democrat (and the wife of MSNBC’s Chris Matthews) who was running for a congressional seat in suburban Maryland outside of Washington, DC.

Their political donations seem standard for a Hollywood couple. There is no record of either donating to a national Republican candidate in the past two decades.

Burnett worked with Trump on The Apprentice, but would he now want to tie his brand to Trump’s? These days, he and Downey are launching their big-budget remake of Ben-Hur, which will hit theaters in August. At a recent screening of the movie—which was held after the horrific mass-shooting at the gay nightclub in Orlando—Downey said, “There’s things clearly happening in the world and we put this film together to impact culture with the message of love and forgiveness and reconciliation and that’s needed now more than ever.” She added, “I think that this film at this time hopefully can offer some type of balm for the hurting world that we live in.”

The last time Burnett and Downey found themselves in a political imbroglio, they expressed support for Obama. In 2013, the History Channel aired a 10-hour miniseries based on the Bible that was produced by Burnett and Downey, and various observers pointed out that the actor portraying Satan on the series bore a striking resemblance to Obama. In response, Downey put out a statement asserting this was hogwash, noting, “Both Mark and I have nothing but respect and love [for] our president, who is a fellow Christian.”