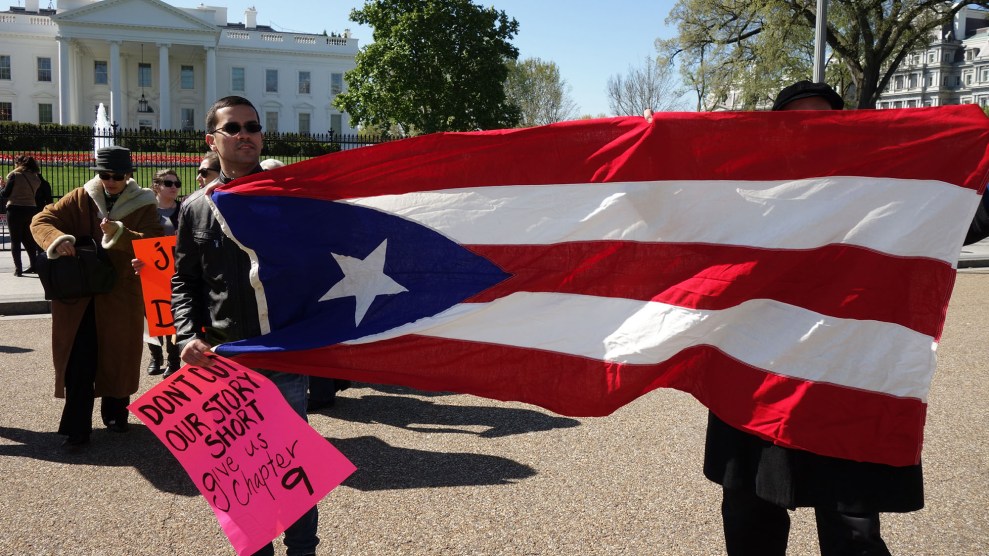 In a 5-2 decision on Monday, the Supreme Court ruled that federal law preempts Puerto Rico from enacting its own bankruptcy laws, something the island’s government attempted in 2014 to help its public utilities restructure nearly a third of the island’s $72 billion debt.

The ruling solidifies the island’s dependence on the US Congress to work out a plan to deal with a debt that the island’s governor has said cannot be repaid. According to Bloomberg Politics, the island faces a $2 billion debt payment on July 1, which comes just two months after it defaulted on $370 million in debts owned by its Government Developmental Bank. On Thursday last week, the US House of Representatives passed its most recent measure to deal with the debt crisis—this one would establish an independent financial review board to manage the island’s affairs.

This is the second recent Supreme Court ruling that reinforces Puerto Rico’s colonial status. Last Thursday, the court ruled that the island can’t separately prosecute defendants in criminal cases as states can because the island’s power comes from Congress, not from local authorities.

Today’s ruling involves a 2014 effort by the island’s government to help its public utilities restructure more than $20 billion in debts through the creation of a bankruptcy process that mirrored that of the US federal system in which states can authorize their cities and public agencies to use federal bankruptcy laws. On the same day that the island enacted the Puerto Rico Corporation Debt Enforcement and Recovery Act, two mutual fund companies—Franklin Advisers and OppenheimerFunds—filed suit to block it.

The US district court in Puerto Rico and the US appeals court agreed with the lenders, and the Supreme Court upheld the lower court’s decision.

In the majority ruling, Justice Clarence Thomas wrote that federal law clearly states that Puerto Rico cannot authorize its municipalities or publicly-financed institutions to declare bankruptcy because the 1984 amendment to the federal bankruptcy statutes specifically bars Puerto Rico and the District of Columbia from seeking bankruptcy court protections.

“Our constitutional structure does not permit this Court to ‘rewrite the statute that Congress has enacted,'” Thomas wrote in the opinion, which was joined by Chief Justice John Roberts, and Justices Stephen Breyer, Anthony Kennedy, and Elena Kagan. Justice Samuel Alito recused himself from the case likely due to his financial investments in Puerto Rico bonds, according to SCOTUSblog’s Lyle Denniston.

Justice Sonya Sotomayor wrote the dissent, joined by Justice Ruth Bader Ginsburg. Sotomayor argued that if Puerto Rico isn’t treated as a state by federal law, it shouldn’t be held to federal bankruptcy laws that govern the activities of states. Further, she argued, the debt crisis in Puerto Rico is causing a real-world humanitarian crisis, and resolving it should not be dependent on political infighting in Congress.

“Congress could step in to resolve Puerto Rico’s crisis,” she wrote. “But, in the interim, the government and people of Puerto Rico should not have to wait for possible congressional action to avert the consequences of unreliable electricity, transportation, and safe water—consequences that members of the Executive and Legislature have described as a looming ‘humanitarian crisis.'”