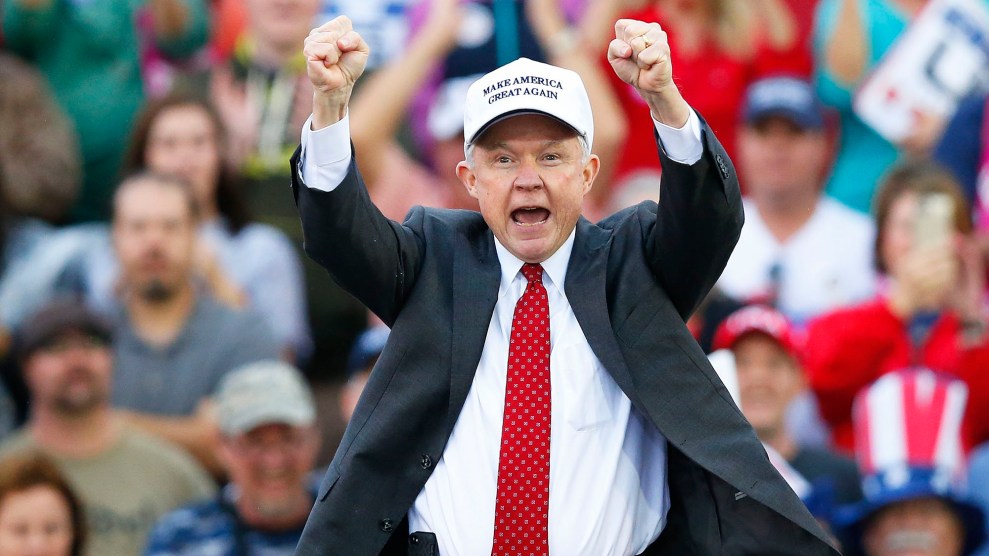 Alabama is nearly 30 percent black, but only three African American judges have ever sat on a federal bench there. Advocates for judicial diversity in the state say that in recent decades, that’s thanks largely to Jeff Sessions, the Republican senator from Alabama whom Donald Trump has nominated to be his attorney general. During his 20 years in the Senate, they say, Sessions has used his perch on the judiciary committee to block nearly every black candidate for a judgeship in his state.

“The senator has a problem putting African Americans on the federal bench in Alabama,” says John Saxon, a Birmingham-based attorney who served on a committee in the 1990s that recommended nominees for judgeships in the state. “And the people need to know that.”

The Senate will hold confirmation hearings over Sessions’ nomination for attorney general on Tuesday and Wednesday. If it votes to confirm him, Sessions will wield significant influence over issues of particular importance to African Americans and other minorities, such as the application of the nation’s civil rights laws. Sessions has a troubled history on race relations that, along with his far-right views on immigration and other issues, has aroused strong opposition from civil rights leaders to his nomination. In 1986, the Senate failed to confirm Sessions, then a federal prosecutor, for a federal judgeship after witnesses at his confirmation hearing claimed Sessions had called a black colleague “boy,” labeled civil rights groups including the NAACP “un-American,” and joked that he used to like the Ku Klux Klan before he learned that its members smoked marijuana. Sessions has denied the first charge and said the other comments were taken out of context.

Those allegations have haunted his career, although he was elected Alabama attorney general in 1994 and to the US Senate two years later. But his track record on African American judges has received far less scrutiny.

For years, Democrats have tried to remedy the inequality in Alabama’s court system by appointing more black judges. Nearly every time, Sessions has succeeded in stopping them.

“It was definitely Jeff Sessions that was preventing the appointment of an African American,” recalls state Sen. Hank Sanders of Mobile.

In 1996, Judge Alex Howard in the Southern District of Alabama retired, creating a vacancy on the same court where Sessions couldn’t get confirmed 10 years prior. At the time, Saxon served on a federal appointments committee overseen by the state Democratic Party, and the committee quickly began vetting potential replacements. The Southern District—whose largest city, Sessions’ hometown of Mobile, is majority African American—has never had a black judge, so the appointments committee unanimously decided that the position should go to an African American, several former members of the committee recall. The committee sent a list of several respected black lawyers and jurists in southern Alabama to the White House, but none of them was ever nominated for the position. According to Saxon, this is because Sessions had informed Bill Clinton’s administration that he opposed every name on the list. Though Sessions had no constitutional power to block their nominations, senators are given significant sway over nominees in their states. And as a member of the judiciary committee, Sessions could have used procedural maneuvers to hold up their nominations indefinitely.

Other members of the appointments committee, some of whom declined to speak on the record, agree that Sessions played a role in preventing the black judicial candidates from being nominated. The White House, they say, was not the problem: Several of them spoke to White House officials who were willing to nominate those black judges, as did other prominent Democrats in the state.

“It was definitely Jeff Sessions that was preventing the appointment of an African American,” recalls Democratic state Sen. Hank Sanders of Mobile, who remembers a White House official pointing to Sessions to explain why none of the black candidates were being put forward for confirmation.

“Senator Sessions voted to confirm Eric Holder for Attorney General as well as judges like Abdul Kallon, Charles Wilson, Janice Rogers Brown, and Miguel Estrada and has put forward a number of women from his state as well,” Sessions spokeswoman Sarah Isgur Flores says in an email response to questions about Sessions’ record on black judges. “As Senator, Jeff Sessions consistently voted for judges who would say what the law is and not what the law should be by substituting their own ideological preferences.”

In the late 1990s, Saxon had the opportunity to appeal personally to Sessions about the vacant Southern District seat when he encountered the senator at a University of Alabama football game. As Saxon recalls, the two men huddled together in the university president’s private box to discuss the open judicial seat, and Sessions repeatedly told Saxon that he couldn’t live with any of the candidates the committee had suggested. So Saxon invited Sessions to propose a different black candidate for the position from anywhere in the state. There were several potential candidates who could have appealed to Sessions, Saxon says. One was Ken Simon, a black lawyer and former state judge who had served in the Ronald Reagan administration and worked at the state’s largest corporate defense firm. “He’s not some flaming liberal,” Saxon says. But Sessions didn’t put forward Simon’s name, or anyone else’s.

“I can’t get in the man’s heart or his soul,” says Saxon. “But I will tell you it’s awfully curious that he blocked any of those names going forward and refused to come up with an alternative name with us saying, ‘Jeff, it’s time to desegregate the Southern District.'”

Saxon’s committee eventually decided that filling the Southern District vacancy with an African American was hopeless and put forward Donald Briskman, a respected Jewish lawyer in Mobile. Sessions blocked him, too, according to Saxon. In 2001, at Sessions’ behest, President George W. Bush nominated Callie Granade, an assistant US attorney whom Sessions had mentored when he was the chief prosecutor in the district. She was confirmed with Sessions’ support.

Sessions’ opposition to black judges in Alabama doesn’t seem to have dissipated over the years. President Barack Obama is leaving office with five district court seats in Alabama unfilled, and a vacancy reserved for an Alabama judge on the 11th Circuit Court of Appeals sits empty. Democrats tried to fill some of those open seats with African Americans, but years of conversations between the White House and Alabama’s two Republican senators, Sessions and Richard Shelby, broke down, with the senators refusing to give approval to any of Obama’s picks. “I think the holdup is basically the White House is ready to nominate some individuals but would like to have some assurance from our senators…that they’re going to at least give some positive thought toward the individuals the president nominates,” Nancy Worley, the head of the Alabama Democratic Party, told the Montgomery Advertiser in 2015.

The only exception to this pattern was the confirmation of Abdul Kallon, a black lawyer, to a federal district judgeship in 2009. But because Kallon replaced retiring Judge U.W. Clemon, a Jimmy Carter appointee and the first African American federal judge in Alabama, the diversity of the state’s bench didn’t change. Clemon tells Mother Jones he believes Sessions’ close ties to the corporate law firm where Kallon was a partner, Bradley Arant Boult Cummings, played a role in Sessions’ decision to support his nomination. Bradley Arant has a lobbying presence in Washington, and two former Sessions aides have gone on to work at the firm. According to the Center for Responsive Politics, Bradley Arant and its attorneys are the seventh-biggest donor to Sessions’ political campaigns over the course of his Senate career.

Still, Sessions’ support of Kallon only went so far. When Obama nominated Kallon to the vacant 11th Circuit seat in February 2016, Sessions opposed his confirmation. One-quarter of the residents of the 11th Circuit, which represents Alabama, Georgia, and Florida, are black—the highest percentage of any federal appeals court in the country—but only one of the court’s 11 judges is African American. The seat on the court reserved for an Alabaman has never been held by a black judge.

The five open seats on Alabama’s federal district courts will now be Trump’s to fill. Liberals have criticized the Obama administration for failing to nominate more people of color in Alabama and other Southern states and for not fighting vigorously enough for the confirmation of the candidates he has nominated. But with Sessions on the judiciary committee, confirming black judges, particularly in Alabama, might have been an uphill battle.

During Obama’s second term, Reed and Sanders, the state senator, traveled to Washington to meet with Sessions, Shelby, and Rep. Terri Sewell, the only Democrat in Alabama’s congressional delegation, with the goal of confirming multiple judges—including African American ones—in Alabama and on the 11th Circuit. Reed appealed to the senators by invoking their place in history. “You’ve got a legacy,” he recalls telling them. “I don’t know anybody who’s ever come out great, or been considered great or good, unless they came down on the side of justice, on the side of civil rights, on the side of racial harmony and progress. I don’t know anybody who’s ever been on the other side and looked good.” The senators responded, he says, by telling him they wanted fair judges.

After the meeting, Reed and Sanders hung back and spoke with Sessions alone. “The meeting was over, and Dr. Reed said, ‘Hank, let’s try to talk to Sessions,'” Sanders says, in an account confirmed by Reed. “‘Cause we considered Sessions a problem. We didn’t consider Shelby the same problem.” But this second attempt also fell apart when Sessions brought up the fact that Sanders had testified against his confirmation to a federal judgeship in 1986.

This story has been updated to include comment from Sessions spokeswoman Sarah Isgur Flores.