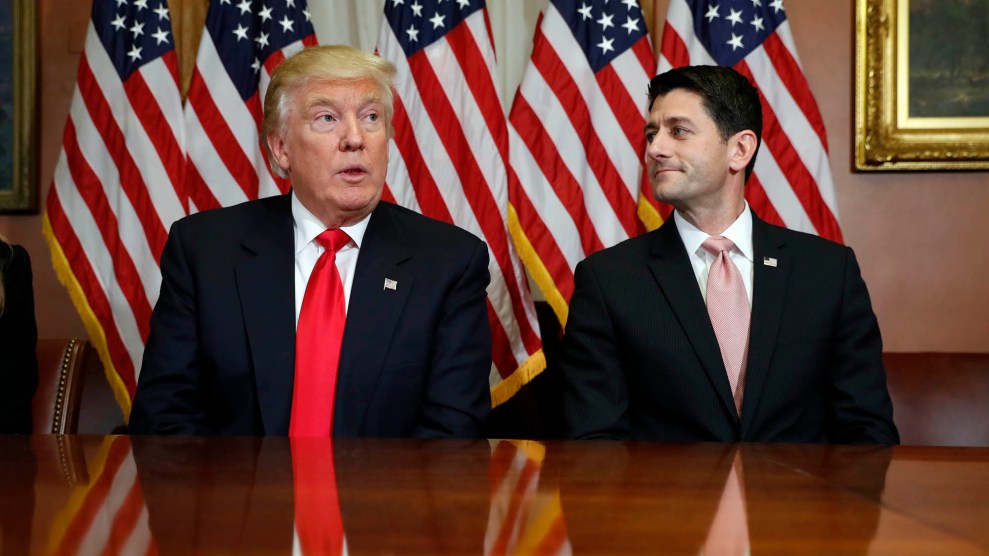 When it comes to the Trump-Russia scandal, most congressional Republicans would rather run away from reporters than talk about this controversy, let alone take any action.

Senate majority leader Mitch McConnell and House Speaker Paul Ryan routinely duck questions about the matter. The GOPers chairing the House and Senate intelligence committees had to be pressured to mount investigations of the contacts between Trump associates and Russian officials (and it’s unclear how thorough these probes will be). Republicans who chair other committees that could dig into parts of this story—say, Rep. Jason Chaffetz (R-Utah), the ever-ready-to-investigate-Democrats chair of the House oversight committee—trudge along in nothing-to-see-here mode. True, Sens. John McCain (R-Ariz.), Lindsey Graham (R-S.C.), and Marco Rubio (R-Fla.) have called for a robust inquiry, and Rep. Darrell Issa (R-Calif.) recently said it’s time for a special prosecutor (and then on Monday backtracked). Generally, though, the Republican Party has fiercely ignored the Trump-Moscow connection.

But now House Democrats have devised a plan to put Republicans on the spot, and their scheme kicks in this week.

“They are trying to aid and abet a cover-up by limiting debate…Using extreme measures to stop this inquiry is collusion.”

It started February 9, when Rep. Jerry Nadler (D-N.Y.) introduced in the House what’s known as a resolution of inquiry. This measure requested that Attorney General Jeff Sessions share with the House information the Justice Department (including the FBI) possesses related to several issues: any investigations of Trump associates’ interactions with a foreign power; any investment by a foreign government or agent in an entity wholly or partly owned by Donald Trump; and any financial conflicts of interest affecting Trump. This legislation would cover information the FBI might have gathered on recently departed national security adviser Michael Flynn and Trump campaign associates Paul Manafort, Carter Page, and Roger Stone.

The minority party in the House has little ability to pass legislation or shape debates. But a resolution of inquiry is special. Under House rules, it must be considered by the relevant committee. If not, within 14 business days it goes straight to the House floor for debate and a vote. With his move, Nadler was forcing Republicans to vote on whether information related to the Trump-Russia connection and the president’s  financial conflicts should be made available to House members.

The difference? If a resolution of inquiry is kicked to a committee, there must, under the rules, be a debate prior to the vote. That would mean that Democrats on the committee, including Nadler, would have a high-profile platform for posing uncomfortable questions to the Republicans before compelling them to vote on all this stuff.

If, on the other hand, a resolution of inquiry is sent to the House floor, the Republican leadership can suppress any debate, but a much larger number of Republicans would then have to vote on the proposal. In this case, that would entail going on record as protecting Trump on these dicey fronts. Either way, Nadler would force some Republicans to take an uncomfortable vote.

House Speaker Paul Ryan (R-Wisc.) eventually decided it would be better for the GOP to bottle up the resolution in the judiciary committee. Late last week, the Republicans notified Nadler that the resolution would be considered by the committee on Tuesday, while the committee would also be deliberating on two medical malpractice bills, on the day Trump would be addressing Congress and dominating the news.

What’s more, the Republicans cooked up a nifty plan to limit Nadler’s ability to mount a full-scale debate on the interactions between Trump associates and Russia. Nadler heard that the chair of the committee, Rep. Bob Goodlatte (R-Va.), intended to submit as a substitute for his bill an amendment that would be identical to Nadler’s measure. Identical? Why would that help the Republicans? With this maneuver, Goodlatte might be able to control the debate on the resolution and only allow Nadler five minutes of speaking time while preventing the other 16 Democrats on the committee from participating in the debate. Committee Republicans would still have to vote on the resolution. But the Democrats would not get as much of a P.R. boost.

“They are trying to aid and abet a cover-up by limiting debate,” Nadler tells me. “This is highly irregular and maybe unprecedented. We know the Russians tried to influence the election. And we know now officials of the Trump campaign were in contact with Russians…Using extreme measures to stop this inquiry is collusion.”

Even if Goodlatte succeeds in quashing debate, the committee’s GOP members will still have to go on record as opposing or supporting the resolution of inquiry. Yet from the GOP perspective, the potential damage will be limited, with no other lawmakers outside the committee having to vote against the resolution. (The Republicans on the judiciary committee tend to be from conservative districts and hold safe seats.)

Whatever happens on Tuesday, Nadler says this won’t be the end of his plot. He notes that additional resolutions of inquiry can be introduced that would be designed to land in other committees. That would force other Republicans to vote on the Trump controversies. Nadler vows he will do all he can to keep House Republicans on the hot seat regarding Trump’s Russia scandal and his financial conflicts. Which means this congressional version of hide-and-seek may well continue.

UPDATE: On Tuesday, the House judiciary committee, divided along party lines, voted down Nadler’s resolution of inquiry 18-16. Politico reports, “House Judiciary Committee Chairman Bob Goodlatte (R-Va.) called the resolution ‘unnecessary, premature’ and driven by politics. Instead, he said Republican members of the committee are drafting a letter to Attorney General Jeff Sessions requesting his voluntary cooperation in any investigation related to Russia and Trump’s business conflicts.” Chaffetz and Issa also voted against the measure. During the debate, Nadler said, “Each day, more questions arise concerning President Trump’s foreign business entanglements and his inexplicably cozy relationship with Russia. Each day, Democrats on this Committee, and on other committees, have requested hearings and investigations into these serious issues. And yet, each day, with a few exceptions, we have been met with a deafening silence from our Republican colleagues.”