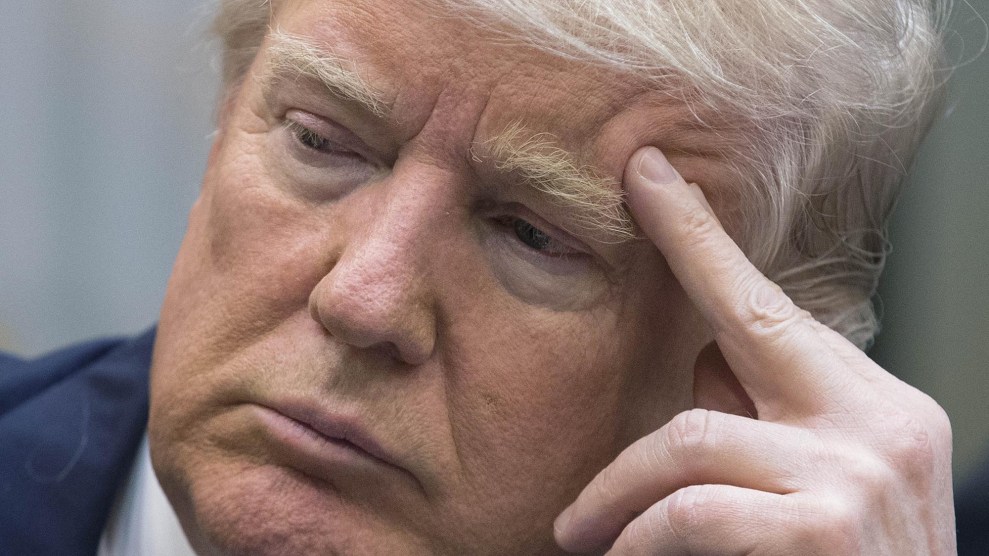 President Donald Trump earned $150 million and paid $38 million in taxes in 2005, according to the cover page of his tax returns from that year, which were leaked to reporter David Cay Johnston and highlighted on the Rachel Maddow Show Tuesday night. According to an analysis of the returns posted on Johnston’s website, Trump and his wife Melania paid just $5.3 million in income taxes, a rate of about 4 percent. The couple paid another $31 million in the alternative minimum tax.

During the 2016 campaign, Trump called for the elimination of the alternative minimum tax (AMT), which is a tax designed to make sure that all taxpayers pay a certain amount even if they manage to reduce their tax liability. In his proposed tax policy, Trump would create just four tax brackets and do away with the AMT.

The White House preemptively announced the top-level tax numbers before Maddow’s broadcast and complained that the publication of Trump’s tax returns is illegal—which is not true.

Appearing on Maddow’s show, Johnston said the cover pages of Trump’s 2005 return were sent to him and he was unsure by whom. The fact that Trump paid little in the way of income taxes—he should have paid a rate of about 35 percent—is what is important, Johnston noted. If not for the AMT, Trump would have paid an extremely low rate.

“On $153 million, almost, of income, he would have paid a little over $5 million,” Johnston said, pointing out that would be a rate of less than 4 percent. Johnston said that rate is less than half of what the lowest tax rate is for Americans who make the least money.

Instead, Johnston said, Trump paid about 24 percent of his income in taxes, which is equivalent to the tax rate of a married couple who earn $400,000 a year.

According to Johnston, Trump was able to claim a variety of deductions and listed a negative income of $103 million, which helped reduce his tax liability.