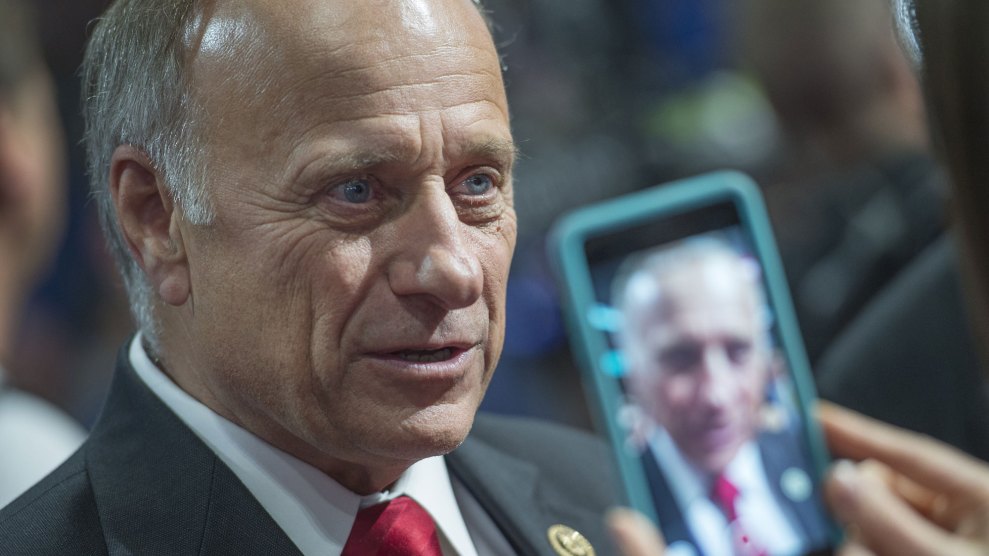 On Sunday, Rep. Steve King (R-Iowa) decided to talk about white genocide. “[C]ulture and demographics are our destiny,” he wrote, in a tweet praising the Dutch nativist politician Geert Wilders. “We can’t restore our civilization with somebody else’s babies.” King was still talking about his belief that the United States will fail if the wrong kind of children come to its shores the next day, when he told Iowa radio host Jan Mickelson to read a book called The Camp of Saints, an anti-immigrant French novel so rancid in its racial caricatures it has drawn comparisons to the Turner Diaries.

Wilders understands that culture and demographics are our destiny. We can’t restore our civilization with somebody else’s babies. https://t.co/4nxLipafWO

This is nothing new for King. Five years ago I watched him speak on a panel at a conservative conference in Washington with a member of VDare, an organization that publishes white nationalist writers and was named for the first English child born in the New World. (Speaking of “other people’s babies.”) King has warned that Mexican children with calves the size of cantaloupes are hauling pounds of marijuana on their backs across the border, suggested that multi-culturalism is breeding an inferiority complex among Hispanic immigrants, and once assembled a model of a border fence on the floor of the House of Representatives.

Increasingly, perhaps emboldened by the ethno-nationalist wave sweeping Europe and the Republican party, King has abandoned the racial subtext that long informed his rhetoric and has skipped straight to the text. In an MSNBC interview during last year’s Republican National Convention, he offered an unabashed defense of a “white,” Western European civilization. “Where did any other sub-group of people contribute more to civilization?” he asked.

Well, how about Iowa? Uncomfortable as it may make him, King’s district was built with the blood and sweat of other people’s babies. When I saw King’s most recent comments, I immediately thought of my grandfather, who had emigrated as a child to Mason City, Iowa—on the eastern edge of the current fourth congressional district—from a dying mining town in central Mexico. In Mason City, his family (he arrived as a toddler around 1920) fell in with a small community of Mexican immigrants and lived together in company housing provided by the Lehigh cement factory, where the men of working age found jobs. They were joined by other immigrants, from Greece and Italy and Eastern Europe.

The Mexican residents of Lehigh Row were outsiders in certain inescapable ways, but their work was essential to the community’s economic livelihood. And critically, the institutions of the community supported them. My grandfather’s teachers helped him learn English, and he eventually went off to college and moved out of state. Many years later, after he had retired and Lehigh Row had faded from the map, he sat down to write a memoir of his youth in pre-war Iowa. An excerpt was published in the Des Moines Register. After King’s most recent outburst, I dug it up:

Lehigh Row is gone*, and the Torreses and Mosquedas and Vegas and Orozcos my grandfather would have known are scattered across the state and beyond. But Iowa is still filled with Lehigh Rows just as it always has been. That will continue to be the case, whether Steve King recognizes it or not.

*Correction: This article originally suggested that the cement factory had closed; it is still in operation.