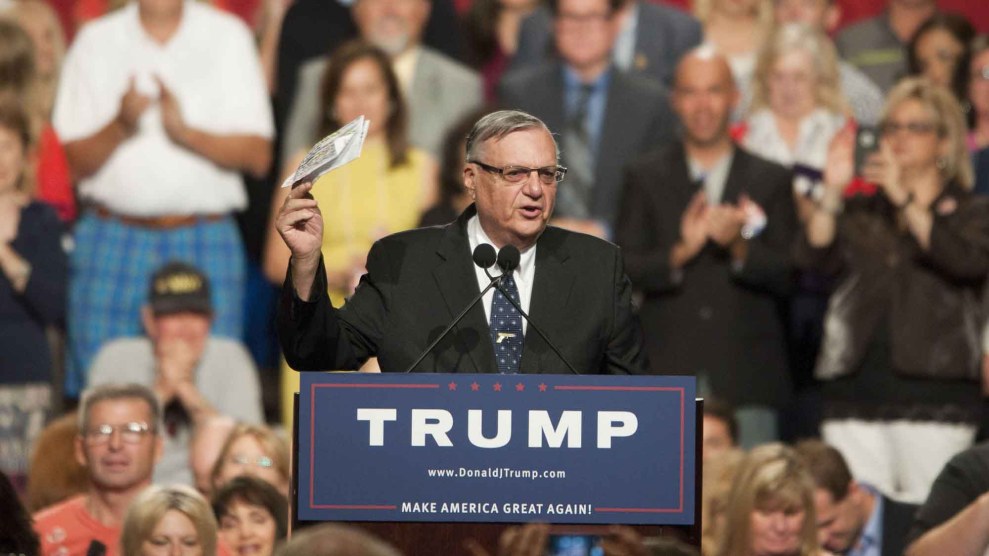 Ahead of President Donald Trump’s visit to Phoenix, Arizona, on Tuesday, there is speculation that Trump might use the speech as an opportunity to pardon former Maricopa County Sheriff Joe Arpaio, a national face of anti-immigration sentiment. Arpaio was recently convicted of contempt of court for disregarding a judge’s order to stop his discriminatory anti-immigration patrols, and he now faces up to six months in jail, with sentencing scheduled for October.

The president told Fox News on August 14 that he was “seriously considering” pardoning Arpaio. “Is there anyone in local law enforcement who has done more to crack down on illegal immigration than Sheriff Joe?” Trump said during the interview. “He has protected people from crimes and saved lives. He doesn’t deserve to be treated this way.” Three Republican congressmen from Arizona—Reps. Trent Franks, Andy Biggs, and Paul Gosar—have called on Trump to pardon Arpaio. But Phoenix Mayor Greg Stanton, a Democrat, said that if Trump announces a pardon at the rally, “it will be clear that his true intent is to enflame emotions and further divide our country.”

The White House didn’t respond to a question about whether Trump was planning to issue the pardon, and Arpaio said he hasn’t heard about an impending pardon but would be “honored by the potential pardon” and would accept it, according to the New York Times. Arpaio told Politico that he’d be available for the Tuesday night rally if called upon.

If Trump follows through with the pardon, he’d be helping to legitimize the actions of a man who was “exalted into a symbol for white supremacists, white nationalists, neo-Nazis, and seen as an icon to that ideology,” Rep. Raul Grijalva (D-Ariz.) told reporters in a conference call on Monday.

Ahead of Tuesday night’s rally, it’s worth remembering how Arpaio landed in legal trouble. Mother Jones, in a piece previewing Arpaio’s tough reelection bid, laid out the basics of the situation last September:

The sheriff could face criminal charges after US District Court Judge Murray Snow, appointed by George W. Bush, ruled August 19 that Arpaio and another senior sheriff’s deputy ignored court orders, lied to the court, and withheld information in a racial profiling case dating back to 2007. The case, Melendres v. Arpaio, was filed by a group of Latinos in Maricopa County targeted by sheriff’s deputies for illegal-immigration sweeps during traffic stops. In 2011, Snow ordered Arpaio and his deputies to quit detaining suspected undocumented immigrants who had not broken any state laws. In 2013, Snow ruled that Arpaio and his deputies had discriminated against Latinos and also that Arpaio had violated the 2011 order in part to bolster his popularity during the 2012 election.

In May this year, Snow ruled that Arpaio had continued to arbitrarily detain Latinos based solely on immigration suspicions and held him in civil contempt, which left the door open for a criminal contempt referral that took place on August 19. Now the US Department of Justice will determine whether to criminally charge Arpaio with contempt of court, a crime punishable with up to six months in prison. In the middle of all this, Arpaio’s attorneys hired a private investigator to investigate the judge’s wife after a tipster told Arpaio that Snow’s wife said that Snow wanted to get Arpaio out of office.

Arpaio went on to lose in November, ending his 24-year run as, in his own words, “America’s Toughest Sheriff.” During his time in office, Arpaio’s anti-immigration actions cost Arizona taxpayers at least $142 million in legal fees, settlements, and court awards, according to an analysis by the Arizona Republic.

Slate ran through just how bad Arpaio’s anti-immigration tactics were, as laid out in a 2011 report by the Department of Justice:

Many of Arpaio’s worst abuses are documented in a 2011 Justice Department report on the sheriff’s office. At the time, a DOJ expert said that Arpaio oversaw the worst pattern of racial profiling he had ever seen. The agency found that Arpaio’s deputies had consistently targeted and harassed Latinos, pulling them over far more frequently than non-Latinos. Arpaio’s office initiated “immigration-related crime suppression activities” when 911 callers complained about Spanish speakers and individuals with “dark skin.” It conducted immigration sweeps that routinely violated the Fourth Amendment. And in many instances, officers detained lawful Latino residents for hours, days, or weeks based on fabricated or exaggerated charges.

Those individuals unfortunate enough to languish in the county jails, which Arpaio’s office operated, suffered grievously. Arpaio’s deputies allegedly put Spanish-speaking inmates in solitary confinement to punish them for not understanding English. They also refused to accept requests for basic daily services that were written in Spanish and pressured Latino inmates into signing deportation forms. The vast majority of inmates in these jails were Latinos detained on suspicion of being undocumented. Jail staff regularly referred to Latino inmates as “wetbacks,” “Mexican bitches,” and “stupid Mexicans.” A federal judge ruled twice that Arpaio’s deputies unlawfully deprived detainees of food and medical care, and tortured inmates who were on psychotropic medication by locking them in unbearably hot solitary confinement cells, which caused an increased risk of heat-related illness. The 9th U.S. Circuit Court of Appeals affirmed that these practices violated the Eighth Amendment’s bar on cruel and unusual punishment.

While federal courts have considered Arpaio’s behavior illegal, the former sheriff’s anti-immigration zealotry endeared him to Trump during last year’s presidential campaign. Arpaio was a featured speaker at last year’s Republican National Convention and a Trump surrogate on the campaign trail. That loyalty to Trump might end up sparing Arpaio from serving jail time.