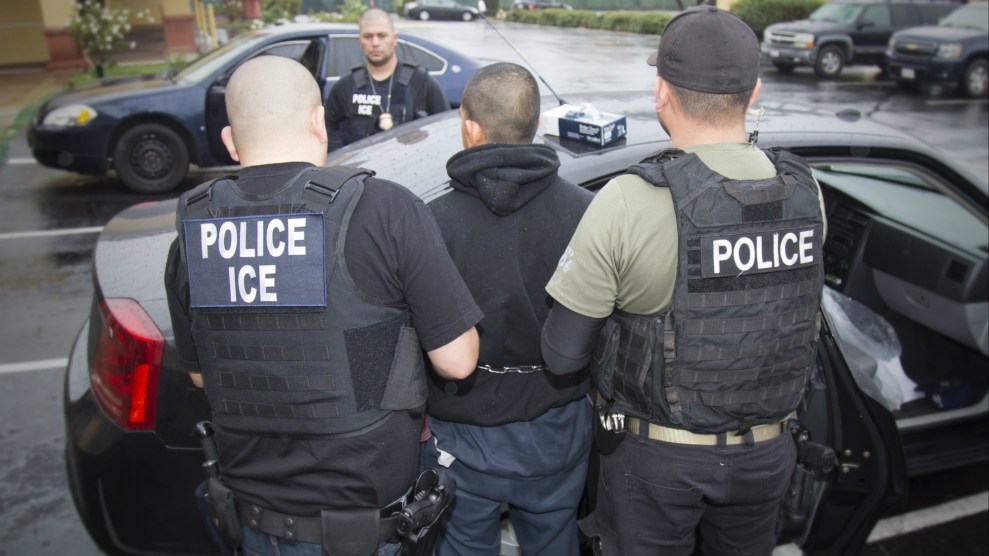 Immigration and Customs Enforcement (ICE) officers make an arrest as a part of a targeted raid in Los Angeles, February, 2017.Charles Reed/AP

Immigration and Custom Enforcement announced on Tuesday that it had arrested 650 people, including 38 minors, in its latest round of raids, which took place July 23 through July 26. That’s roughly as many people as were arrested during similar large-scale sweeps earlier this year, after President Donald Trump first announced his administration’s crackdown on illegal immigration. But while only 170 of the people arrested in January and February had no criminal record, this time ICE officers detained a whopping 520 people whose only offense was being in the United States without papers. In other words, just a fifth of those arrested last week had committed any other crime.

ICE claims the targets of its recent sweeps—families and young adults who came here as unaccompanied minors—are the subjects of removal orders by federal judges. But it is unclear how many of the 650 arrestees were on the target list or how these lists are created to begin with. It’s possible that many of the 520 noncriminal detainees were simply swept up as ICE officers searched for the people actually on their list.

Last week’s raids are the continuation of Obama-era deportation programs, but the so-called collateral detentions have increased significantly since Trump took office. Under Obama, ICE generally let noncriminal undocumented immigrants go about their business in the absence of a deportation order.

A New York Times reporter who recently accompanied ICE on one of its sweeps for The Daily podcast witnessed the arrest of a father with no criminal record after officers failed to find his son, who was on their target list for violent offenses. “What President Trump did is expand the term ‘criminal.’ Anybody who has crossed the border illegally is considered a criminal, and that has enabled officers to arrest many, many more people,” notes the Times‘ Jennifer Medina. “It’s absolutely a roll of the dice and a very subjective decision over who to take in.”