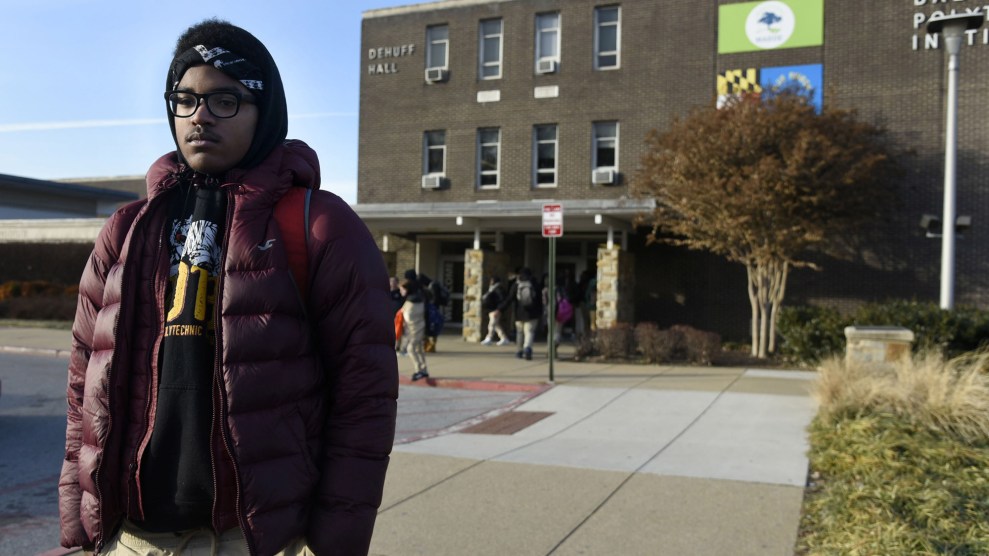 Matthew Cunningham, 18, a senior at Baltimore Polytechnic Institute, talks about the cold temperatures in the school as he leaves for the day.Kim Hairston/Baltimore Sun/ZUMA

This week, as the “bomb cyclone” ravaged cities along the East Coast, schools across the northeastern and southern United States were forced to shut down due to inclement weather and freezing temperatures. But Baltimore schools remained open during the first half of the week despite broken heating systems that caused some classroom temperatures to dip below 40 degrees. And although schools closed on Thursday and Friday, the debate over who’s responsible for the inadequate heating and water systems in the city’s aging school buildings—and how to fix the underlying problem—rages on.

The plight of Baltimore students first reached national consciousness on Wednesday, when a video of students discussing the conditions with former NFL linebacker turned elementary school teacher Aaron Maybin went viral. “What’s the day been like for you today?” Maybin asked. “Cold!” the kids, some in jackets and hoodies, shouted together. Parents and teachers shared images of kids bundled in coats and thermostats on social media.

On Wednesday, after the district closed four schools and dismissed two others early, Baltimore City Public Schools CEO Sonja Santelises said in a Facebook video that 60 school buildings—a third of the district—reported problems that included broken boilers and water pipes. The decision to close schools, though, wasn’t made lightly. Santelises noted in the video that in the district, where nearly 87 percent of students are eligible for free and reduced lunch, administrators were forced to try to find a balance between the students’ need for food and safety with an impossibly cold learning environment.

It didn’t take long for local politicians to start sparring over the issue: On Thursday, when Lt. Gov. Boyd Rutherford tweeted that if his kids were in Baltimore’s schools, he would be at the superintendent’s office “seeking answers,” former NAACP president Ben Jealous, a Democratic candidate for Maryland governor, shot back, replying that “all Maryland kids” are Rutherford’s kids. “Will we see you at the Superintendent’s office seeking answers for your kids?” he tweeted. Jealous wrote later on Facebook that Rutherford didn’t show up, adding: “Had he, I would have told him our administrators and teachers are not to blame and that it’s time we fully fund our schools.”

When do you want to go?

In a statement to CNN, Santelises expressed frustration with the lack of funding for school infrastructure.

“[T]oo many of our buildings have outdated heating systems, poor insulation, and aging pipes as a result of years of inadequate funding for maintenance and facilities improvements,” she said. In an op-ed for Teen Vogue, Kimberly Mooney, a teacher in Baltimore, also argued that the schools’ faltering pipes were just one example of the minimal financial support from the state to resolve Baltimore’s “crumbling infrastructure.”

In 2012, a report commissioned by Baltimore City Public Schools found that 69 percent of the district’s campuses were in “very poor condition,” and it would take an estimated $2.5 billion to bring buildings up to adequate standards. The Baltimore Sun reported on Thursday that the city’s schools have had to return $66 million in state funding to fix heating systems and make building repairs after they delayed projects for too long or the projects became too costly. Lawmakers called for changes to how money was awarded for projects,  and Maryland’s Gov. Larry Hogan said he was “outraged at the failures in Baltimore City” and blasted officials’ “ineptness and mismanagement” regarding the funding.

The debate in Baltimore reflects longstanding infrastructure woes schools face throughout the country. Beyond roads and highways, these 100,000 public schools—many of which are housed by aging buildings in desperate need of repairs and modernization—make up the second largest infrastructure system in the United States. Yet the American Society of Civil Engineers (ASCE) concluded in its annual report card last year that more than half of the nation’s public schools needed investments just to bring the building conditions to “good.” High-quality school facilities have been linked to better academic achievement for students, fewer suspensions, and better staff retention.

The problem has been brewing for decades. The Government Accountability Office concluded in 1995 that America’s schools needed a collective $112 billion to “repair or upgrade their facilities to good condition.” That number has ballooned to an estimated $145 billion per year, including an additional $46 billion each year on construction and maintenance to bring facilities up to modern standards, according to a 2016 “State of Our Schools” report.

Currently, the federal government spends little on improving school infrastructure, leaving the bulk of the financing to come from the state and local governments. In fact, local taxpayer dollars account for, on average, only 45 percent of funding toward maintenance and operations. But budgets are tight: After the 2008 recession, most states reduced school funding, putting pressure on local districts to make up the difference. In 2015, 29 states still had less overall state funding than they did in the 2008 school year, according to the Center on Budget and Policy Priorities, even as student enrollment grew.

Meanwhile, the capital funds, which are used to renovate and build new schools and to shore up technological infrastructure, dropped 31 percent from 2008 to 2015. The ASCE 2017 report card noted that the constricted budgets have led to “accelerating deterioration of heating, cooling, and lighting systems.”  And much of the capital construction investment on school facilities—82 percent—comes down to how much school districts can raise from taxpayers, the 2016 “State of Our Schools” joint report noted. “Because the large majority of capital construction is funded by local taxpayers, the ability of school districts to pay for major renewals or new construction is tied to the wealth of their community, perpetuating inequity in school facility conditions,” the authors wrote.

One 2006 study found that projects at schools in wealthier areas spent three times more capital funds than projects in schools in poorer areas—where infrastructure investment is needed the most. In the 2012-2013 school year, 60 percent of schools with some of the poorest student populations, where more than 75 percent of students qualify for free and reduced lunch, needed repairs. That’s 12 percentage points higher than those in wealthier communities, according to theNational Education Center for Statistics.

It’s unclear whether President Donald Trump, with his long–promised $1 trillion infrastructure plan, will keep his pledge to “rebuild our roads, bridges, tunnels, highways, airports, schools, and hospitals.” Last January, Senate Democrats introduced their own 10-year infrastructure proposal that included $75 billion toward shoring up schools, and it’s been lying dormant in Congress ever since. For now, some citizens are taking action—a college student’s GoFundMe campaign to provide space heaters and jackets for the Baltimore students far exceeded its $20,000 goal.