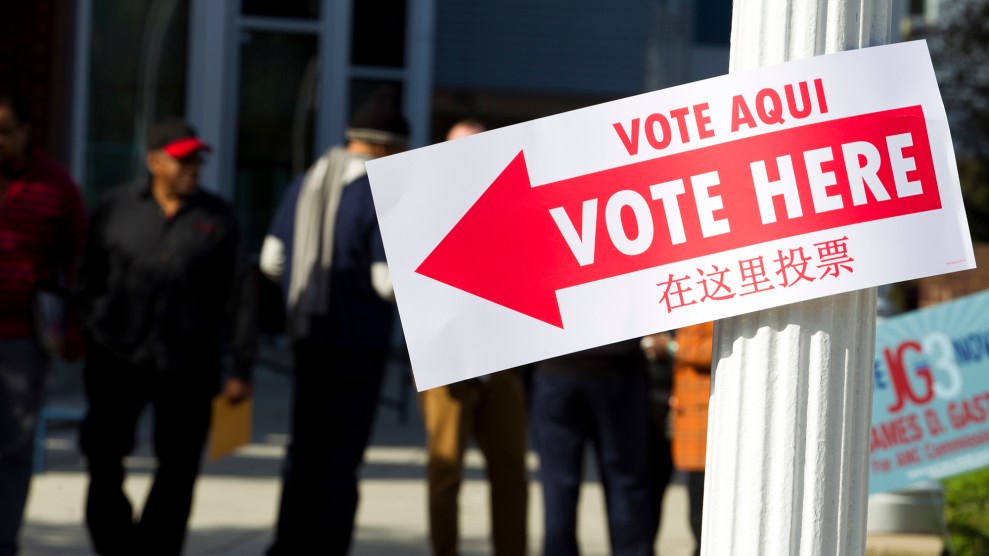 A voting sign at the entrance of a polling station in Takoma Park, MD.Jose Luis Magana/AP

Maryland became the 12th state to enact automatic voter registration on Thursday after Republican Gov. Larry Hogan declined to veto a bill that had passed the Democratic-controlled Legislature. Maryland has half a million unregistered voters, according to a 2017 report by the department of legislative services. Maryland’s adoption of automatic registration comes as lawmakers in blue and purple states across the country have been taking aggressive steps to expand access to the ballot this year, in an attempt to combat Republican voter suppression efforts at the state and national levels.

Under the bill, eligible voters will automatically be registered when they obtain or renew a driver’s license at the Department of Motor Vehicles or interact with other agencies such as the state’s health insurance exchange and local departments of social services, unless they opt out. The new law takes effect in July 2019 and could register 400,000 new voters, according to a report by Demos.

More than 270,000 new voters were registered that way in 2016, and Oregon had the highest turnout increase of any state in the last presidential election. Registration among voters of color increased by 26 points.

After years of Republican attempts to restrict access to the ballot, Democrats are now pushing more assertively to protect voting rights. According to a recent report by the Brennan Center for Justice, 514 bills to expand voting access have been introduced this year in 41 states, and 20 bills expanding voting access have passed at least one legislative chamber in 12 states. “Broadly speaking, more pro-voter reforms are moving than anti-voter restrictions,” the Brennan Center says.

At the same time, red states have not given up efforts to make it harder to vote. Twenty-three states have passed new voting restrictions since 2010, and 70 bills to restrict voting access have been introduced in 24 states this year.