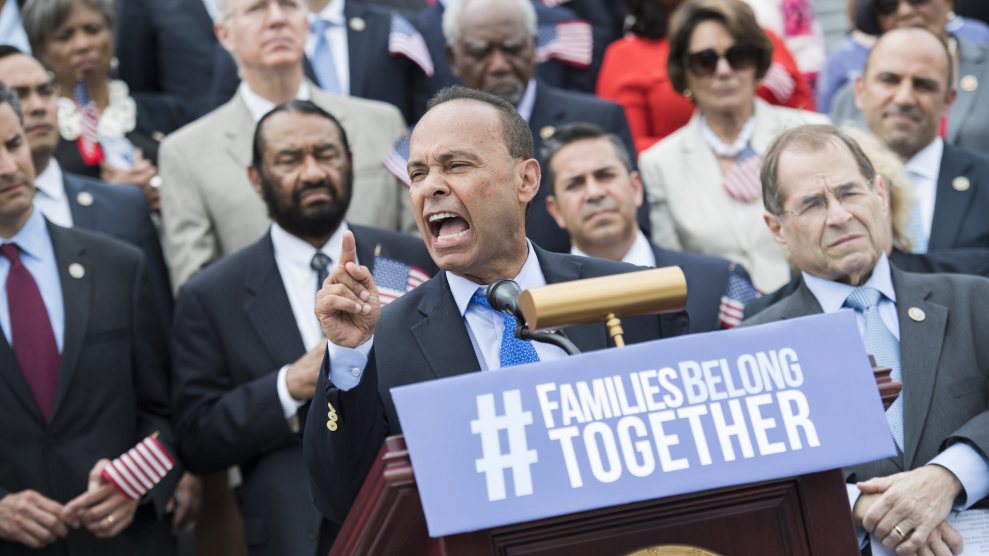 Rep. Luis Gutierrez (D-Ill.) and House Democrats hold a rally on the steps of the Capitol to call for the end of the separation of parents and children at the border of the US and Mexico on June 20, 2018.Tom Williams/Congressional Quarterly/Newscom via ZUMA Press

Public opinion was not on the side of Republican lawmakers this week. Two-thirds of Americans, and nearly 60 percent of Republicans, disapproved of the Trump administration’s policy that separated children from undocumented parents prosecuted for entering the United States. And Democrats, vying to take control of the House this fall, pounced on that public outcry as they hammered Republicans for their tacit complicity with the administration’s policy. “House Republicans have seemed to walk away from a piece of legislation that would allow us to address this issue and to fix it,” Rep. Ben Ray Luján (D-N.M.), the chairman of the Democratic Congressional Campaign Committee, said on ABC this past Sunday. “I think this is going to be devastating for House Republicans that made promises to their constituents.”

On Wednesday, President Trump signed an executive order that keeps families together while parents face criminal charges. But the order did not end the “zero-tolerance” initiative that arrests undocumented parents for crossing the border, nor did it clarify how long these families would be detained. The order also didn’t reunite families that had already been separated. And so, while the family separation practice may have ceased, Democrats running for Congress plan to capitalize on those linger questions in hopes of channeling outrage into votes for the 2018 midterms.

Immigration reform has been a key issue for both parties over the course of primary season. Most Democrats have campaigned on a pathway to citizenship for “Dreamers”—people brought into the country without authorization as children—while more progressive candidates have called to abolish Immigration and Customs Enforcement altogether. Until this point, however, immigration had been a more prominent point of discussion among Republicans: GOP candidates have aired more than 14,000 advertisements that emphasize a need to crackdown on illegal immigration, a quantity that dwarfs Democratic ad spending on the subject. But a spokesperson for the DCCC says the committee has observed a new visceral reaction to the subject among voters, one stirred by the images and audio recordings of children in detainment, that pulls the matter out of a policy frame and makes it real. The DCCC expects to keep the emphasis on the need for a Congress that’s willing to create permanent laws around the issue, so immigration policy isn’t driven solely through executive branch action.

That’s also where Democrats seeking office kept their focus this week. Jennifer Wexton, who’s seeking to replace Republican Rep. Barbara Comstock in Virginia’s 10th District, took to Twitter to pressure Comstock into condemning the separation, then slammed the Republican’s eventual press release for “using many words to say nothing.” Jason Crow, who’s hoping to unseat Rep. Mike Coffman (R-Colo.), held a protest outside of a US Immigration and Customs Enforcement facility in Aurora, Colorado, on Wednesday, where he read Coffman’s voting record alongside what the Republican has said about family separation in order to contrast his opponent’s political action with his promises to voters.

Even as the executive order defanged the matter to a degree, candidates have fought to keep the memory of the policy in voters’ minds. Marc Friedenberg, who’s running against incumbent Rep. Tom Marino (R-Penn.), advertised on Facebook an immigration town hall he’s hosting on June 30 that will seek to remind voters of the more than 2,000 children still separated from their parents. Even with an executive order, Friedenberg’s ad said, “it is clear that President Trump’s order is not a comprehensive solution to the immigration crisis and it cannot make up for the thousands of families that have been torn apart.”

George Franklin, one of the Democrats vying to replace Rep. Mike Bishop (R-Mich.) in what’s viewed as a flippable district, invited voters to sign a petition “to demand answers and solutions to inhumane policies at our border,” because even though the president issued his executive order, “he hasn’t touched the issue of reuniting families his policies have torn apart.”

Josh Harder, who’s running to replace Republican Rep. Jeff Denhem in California’s 10th District, notes that the end of the policy doesn’t actually address the systemic concerns that could be tackled by comprehensive immigration reform. Immigration bills have languished during this session of Congress, even when public outcry has reached new heights. “Family separation policy is just one symptom of a much larger disease, which is that this administration and our current Congress has shown no courage to do comprehensive immigration reform,” Harder tells Mother Jones. “I’m glad it seems like it may be ended, but it seems like there’s a way bigger problem here.” His campaign began running an ad on Friday on those lines, one that aligns his Republican opponent with the Trump administration and blames him for “doing nothing in Washington to solve the problem.”

With the Trump administration’s ever-shifting immigration stance, campaigns have received some guidance from the DCCC to help them understand the latest executive action—mainly, information about the policy implications and how it reconciles with the Flores settlement, a 1997 court decision that limits the government’s ability to detain immigrant children for more than 20 days.

But candidates have, by and large, relied on their own experiences, and that of their communities, to connect with voters on the issue. Democrat Debbie Mucarsel-Powell, who’s running to replace Rep. Carlos Cubelo (R-Fla.), came to America from Ecuador with her mother and sisters when she was a child. She released a new online video ad earlier this week—at the height of public outrage over family separations—that tells her personal immigration story. She says that family separation policy gave her story new resonance, one that’s meaningful to roughly half of voters in her district who were born outside the US. “I can’t imagine what some of these parents might be feeling,” she said. “For me and for many for us [in my district], this isn’t just political.”

Harder, whose district in California’s Central Valley is home to many immigrants, says the family separation policy would have been a personal concern for many of his would-be constituents, one that they won’t easily forget. “People have said, ‘Look, I’ve seen that footage on TV and that could have been me,’” he said. “We know what kind of chilling impact [the family separation policy] would have in a district like this one.” He’s held a number of immigration-focused rallies over the course of his campaign, and says he’ll put the stories of Dreamers front and center. “There’s no more powerful voice for immigration reform than someone who’s a neighbor, who’s a friend, who’s a classmate,” he says.

Even with this recent focus, immigration will compete among other pressing issues for candidates’ attention over the course of election season. Though a Pew study released this week found immigration to be at the top of voters’ minds, campaigns have stayed focused on jobs, health care, taxes, and gun control. So far, Democrats have placed more than 26,000 ad buys for health care, a number that accounts for an overwhelming majority of their ad spending.

The family separation policy, though, may have ignited a shift. Harder’s recent Facebook advertising, for example, discussed health care and gun violence, before his new online ad today. “If you had asked me a month ago, I would have said, ‘I hope this [immigration] would have an impact, but we’ll have to see,’” Harder says. But now, he feels like it’s mobilizing voters in his district.